The spectacular sight and the awe-inspiring beauty and grandeur of the Victoria Falls make it one of the greatest attractions in Africa. The waterfall is located in southern Africa on the river Zambezi at the border between two countries, Zambia and Zimbabwe. Width of 1,688 meters and an altitude of 108 meters make it the world’s largest sheet of falling water. Listed below are 20+ thrilling facts about the spectacular Victoria Falls. 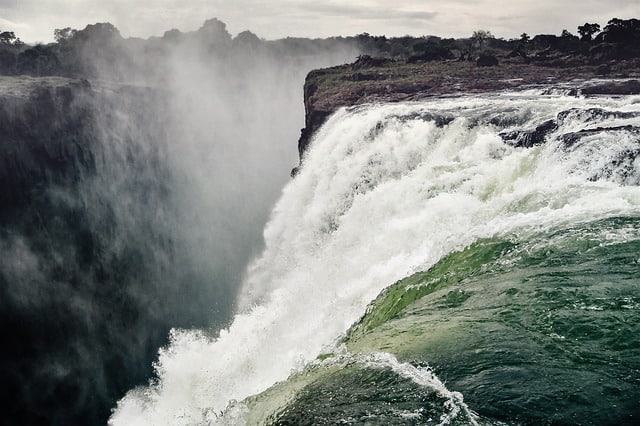 A Scottish missionary and explorer, David Livingstone is believed to have first seen the falls on 16th November 1855 and named it after the then British monarch Queen Victoria. However, its local name Mosi-oa-Tunya, which means “The Smoke That Thunders,” continues to be popular as well. The Kololo tribe that lived in the area during the 1800s gave this name.

The Zambezi River plummets over the edge, spread over nearly two kilometers, into a gorge that is one hundred meters deep at the speed of 1,088 m3/s. It carries more than five hundred million cubic meters of water per minute.

Fact 3: Seven Wonders of the World

Victoria Fall is one of the seven owners of the world. It is placed on equal footing with Great Barrier Reef, Mount Everest, and the Grand Canyon.

Fact 4: The Spray and Smoke

Columns of spray and a shield of cold watery smoke can be seen from miles away, especially at the peak of the rainy season. They are visible from a distance of 30 km from the Lusaka road, Zambia and 50 km from Bulawayo road, Zimbabwe.

Victoria Falls has been receding since the last 100,000 years. Initially, it was located 8km downstream from its current day position. The basalt rock which is perpendicular to the river’s flow is weak which along with 2 million years’ of erosion have created seven subsequent gorges, which zigzag upstream from the previous one.

The sound of the surging water of Victoria Falls can be heard from a distance of about 40 kilometers.

Victoria Falls offers a specular view of a unique phenomenon called the “moonbow.” On full moon night, the light from the moon rebounds the spray creating a “lunar rainbow” or “moonbow.” This view persists from sunset to sunrise.

The Victoria Falls is protected by the Zambezi National Park, which covers a land of 56,000 hectares. The Zambezi River forms the northern border of the park. The national park was established in the year 1983 and is home to animals like elephant, lion, buffalo, and leopard. There are also herds of sable antelope, eland, zebra, giraffe, kudu, waterbuck and impala.

The Victoria Fall has no existence without the Zambezi River. The river is 2,574km long, and the fall lies almost halfway on its path. The Zambezi River flows to the east from the falls and travels through six countries before submerging into the Indian Ocean. The river is home to 75 species of fish. It is also well-known for its bream and fighting tiger fish.

On the Zimbabwean side of the falls lies the Victoria Falls Rain-forest, which is protected by the Victoria Falls National Park since 2013. It covers an area of 2300ha. In the rainforest, one can find a wide variety of ferns and palms, and diversity of birds and smaller animals.

Between August and January, when the water level is little low, and the current is milder, a rocky pool is formed at the very edge of the falls and is known as Devil’s pool. It is one of the world’s best infinity pools. The pool has an underwater guard of rock that stops the adventurers just a few feet away from the plunging water.

The 30-kilometer radius of Zimbabwean and Zambian territory around the Victoria Falls has been declared as UNESCO World Heritage Site since 1989.

Zambia and Zimbabwe have successfully developed their tourism centering around Victoria Falls. The tourism began after 1905 when the railway to Bulawayo was constructed. By the 1960s the influx of tourists declined due to guerrilla struggle in Zimbabwe. After the independence of Zimbabwe in 1980, however, the region became relatively peaceful, and tourists started flocking in to revisit Victoria Falls.

According to the Hospitality group Africa Albida Tourism (AAT) chief executive Ross Kennedy, there has been a 13 percent increase in occupancy in ten hotels in Victoria Falls over the first three months of 2018 as compared to the same period last year. This is equivalent to more than 5,000 additional rooms sold.

Another indicator states that the revenue of the ten hotels has risen by 25 percent over the first three months of 2018, compared to the same period last year. They have also experienced an 11 percent increase in RevPAR (revenue per available room). Roughly one million people visit Victoria Falls each year.

The best time to visit the Falls is the dry season which lasts from late March to mid-November. Within the dry season, the best period to visit is either in June or July when the Falls is robust yet visible. In the period between August and October, the water level remains so low that only the rocks remain visible. During the rainy season, which is from the end of November to early April, the Falls is covered by an abundance of mist and water in the air making the Falls obscure.

There are two options for getting the best view of the falls. One is to take the many trails that run along the Falls. Some of these trails can take tourists to as close as 200 feet. It is even possible to walk across the Falls during the dry season. Another option is to take an aerial view with helicopter services.

Unrest in Zimbabwe in recent years has dampened tourism in the country. Most of the tourists approach the Victorian Falls through Zambia. To ensure the safety of tourists, a special group named the Tourism Police was initiated who patrol the tourist areas and are easily identified by their yellow reflective ribs.

READ:  What is Ecology and What are Various Ways to Protect Ecology

The inaugural African Union (AU) and United Nations (UN) Wildlife Economy Summit to be held in Victoria Falls from 23-25 June 2019, where Heads of State and Cabinet ministers from at least 30 African countries have registered to take part in.

The Bridge traverses the Zambezi River beneath the Victoria Falls. It is built over the Second Gorge of the falls. The bridge connects the two countries, Zimbabwe and Zambia. It has border posts at both ends. The bridge was a brainchild of Cecil Rhodes, who reportedly said: “build the Bridge across the Zambezi where the trains, as they pass, will catch the spray of the Falls.” Unfortunately, he was not alive to see the construction of the bridge.

Urban development, pollution, and extraction of water are posing an environmental threat to the Falls.

Fact 22: Threat to the Flora and Fauna

Growing human population is impacting the ecosystem around the Victoria Falls directly. The fish population has been the worst victim.

Fact 23: Unrest in Zimbabwe taking a toll on the Environment

The growing political and economic instability in Zimbabwe is taking a toll on the National Parks centered around the Victoria Falls. Deforestation, poaching, and unsustainable resource exploitation are destroying these parks.