Just like any other Seven Wonders of the World – the Great Barrier Reef is extremely mesmerizing and is probably one of the most diverse ecosystems in the world. The ecosystem which runs off the coast of Queensland is home to some of the most exciting and diverse marine life. From reef-building corals to predatory fishes like sharks, these reefs are complex, yet fascinating. Because of its natural beauty, the reef is a popular tourist attraction and is of great economic value to the Australians. Furthermore, it enjoys a reputation for its kaleidoscopic corals, turquoise water and spellbinding marine life.

The magical Great Barrier Reef is a World Heritage site since 1981, and the following 35+ facts will tell you about the rich heritage of the place. 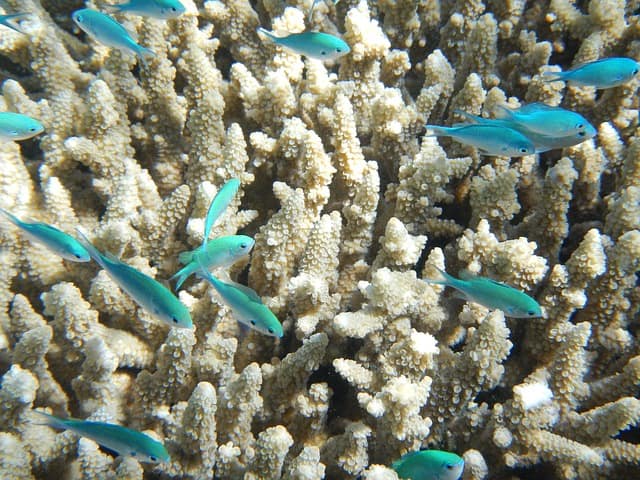 Fact 1: Surprisingly, the prized possession of Australia is some 18,000 years old and was formed after the end of the last ice age.

Fact 2: In the year 1768, Louis de Bougainville first discovered the reefs during an exploratory mission but refused to make any claim. It was in 1770 when James Cook’s ship was stuck fast on the reef for an entire day.

Fact 3: The Great Barrier Reef is composed of 2900 different reefs each having a unique ecosystem and close to 900 islands with habitation on a few of them.

Fact 4: The mesmerizing ecosystem stretches 2300 km along the coastline and spreads over 344,400 square kilometers making it visible from the outer space. It’s also the largest living thing in the world.

Fact 5: The 2900 reefs which combine to form the Great Barrier Reef have an average depth of 40 meters. But, the outer edge is around 2 km deep.

READ:  What is a Biome and What are Major Types of Biomes on Earth?

Fact 7: The Barrier is larger than Italy in size.

Fact 8: It is so big that it can be seen from the space and it’s one of the favorite photo-option for satellites.

Fact 9: The water around the Great Barrier Reefs is from the Pacific Ocean, and the water temperature remains constant throughout the year. The temperature of the water is warm and varies between 21oC to 38o

Fact 10: The water is clear making it an ideal place for exploring marine life.

Fact 13: The hard corals are the backbone of the reefs but grow just 1.3 cm every year. However, due to increasing pollution, the Barrier lost half of the corals by 2012.

Fact 16: The reef is a home for some of the deadliest animals in the ocean including the blue-ringed octopus and box jellyfish. The box jellyfish is the most poisonous out of the lot and has 60 poisonous tentacles which are enough to kill any human.

Fact 17: Other exotic species of birds found on the Barrier are Cassowary which is a huge bird.

Fact 18: The sandy coral islands in the lagoon are the house of the largest green turtle.

Fact 19: Mangroves present in the Barrier grow in brackish water (an area where fresh water and salt combine) where no other plant can ever thrive. These mangroves are critical for maintaining the health of the reef because it traps river sediments and create mud on which several tiny species live.

Fact 20: Crustose coralline algae enjoy a symbiotic relationship with the corals as it helps in the growth of the coral reefs. The alga releases sediment which binds the different layers of the limestone.

Fact 21: Due to the scenic beauty and fantastic aquatic life, the reef attracts more than 2 million tourists every year, making it one of the largest contributors to the GDP of Australia.

Fact 22: Tourism generates close to AUD 5-6 billion per year in the form of food, transport, tours, accommodation, and others.

Fact 25: Even if you dive every day of your life, you cannot entirely see the reef.

Fact 26: One-third of the reefs are fringing reefs whereas the remaining two-thirds are platform, crescentic or ribbon reefs.

Fact 27: It’s a home for one of the largest wildlife wreck on Earth. In 1911, a passenger ship SS Yongala sank in the lagoon. Located at a depth of 30 meters it has now become a vibrant fish sanctuary and a must-visit destination for the divers.

Fact 28: The GBRMPA (Great Barrier Reef Marine Park Authority) levies a tourist tax of $6.50 per person per day to conserve the best gift from nature.

Fact 29: Hamilton is the largest island of the Barrier and is the only island having a commercial airport. Tourists use this airport to visit the beautiful reefs.

Fact 30: In 2014, tourists were able to view the Barrier in 3D using underwater street view. The company has installed specialized cameras at every location which clicks a picture every 3 seconds to provide a 360-degree view of the superlative natural beauty.

Fact 32: The Great Barrier Reef Marine Park was declared a UNESCO World Heritage site in 1981. To conserve the area, the government spends over $200 million per year. And, today it’s one of the best-protected places on Earth with a lot of rules and stringent regulations.

Fact 33: Two mass coral bleaching events occurred between 1998 and 2002 when more than 50% of the reefs experienced bleaching. The prime reason for the bleaching was pollution and industrialization.

Fact 35: Illegal fishing, coastal development, and poor water quality are other factors possessing a threat to the coral reefs and marine life.

Fact 36: Global warming and extensive pollution are resulting in the outburst of deadly starfish thereby making the reefs vulnerable.

Fact 37: Soaring deforestation on the east coast of Australia is adding pressure on the besieged wonder of the world. Between 2015- 16 alone, more than 395,000 hectares of land around the reefs was deforested.

Fact 38: In 2016, a magazine named Outside Magazine to draw the attention of the world towards the reef ran an obituary for the Great Barrier Reef.

It’s indeed an astounding place where nature is at its best. The reef is a habitat for a treasure trove of animals and plants – many of which are yet unknown to the humans.