The Rocky Mountains, known to us as just ‘The Rockies’, are the majestic north to the south mountain chain of North America. Millions of tourists visit ‘the Rockies’ for their scenic splendor, global significance, and intact ecosystem. But how much do you actually know about them?

The mountain’s name is a translation from Native American (Algonquin/Cree) name As-sin-wati, which means ‘a rocky mass’. By 1752, Montaignes de Roche, or “Rocky Mountains,” was the common French name, and apparently, everyone picked up on it; though when ‘The Rockies’ was coined is still unclear.

Find out all you need to know about the Rocky Mountains, from its history to geology to some interesting facts.

Birth of the Rockies

The rock that formed the core of the North American continent was believed to be formed approximately 1.7 billion years. When Africa and North America were coming together, it uplifted 320 million years ago, forming the Ancestral Rocky Mountain.

According to geological evidence, today’s peaks took shape during the Laramide orogeny, a phase of mountain building that occurred approximately 70 – 40 million years ago during the Cretaceous and into Tertiary period. It was during this period the Farallon Plate collided and began to slide underneath the North American continent.

The intense compressional forces resulted in major upfolding and uplifting of the Laramide ranges and formed topographically high areas including the Rockies.

The Rocky Mountain is a series of 100+ separate mountain ranges, rather than a single, long mountain chain. The Rockies extend 3000 miles through two countries, from British Columbia and Alberta in Canada through Idaho, Montana, Wyoming, Colorado, and down to New Mexico in the United States.

They are also distinguished by the Continental Divide, which winds its way through the mountains and separates the basins of the streams that flow down to the Pacific and Atlantic Oceans.

As per the topography, the Rockies are divided into the Southern Rockies, Middle Rockies, Northern Rockies (all in the United States), the Rocky Mountain system of Canada, and the Brooks Range in Alaska.

The Wyoming Basin, between Middle and Southern Rockies, is sometimes considered as a sixth physiographic province.

It is from this region the Rocky Mountain Trench and Purcell Trench originates.

Mt. Chamberlain (2,749 meters) is the tallest peak in the Brooks Range.

Fact 1: Sir Alexander MacKenzie, a British explorer was the first European to cross the Rocky Mountains. On July 20th, 1793, he arrived at British Columbia and made the first transcontinental crossing of North America.

Fact 2: The Lewis and Clark Expedition (1803-1806), also known as the Corps of Discovery Expedition, was the first scientific exploration of the Rockies.

Fact 3: With an elevation of 4,401 meters, Mount Elbert of Colorado is the tallest mountain in the Rocky chain.

It is situated in the Sawatch Range, where there are three other highest Rocky Mountain peaks: Mount Massive (4,398 meters / 14,428 feet) and Mount Harvard (4,396 meters/ 14,421 feet). On the Canadian side of the Rockies, this title goes to Mount Robson (3,954 meters), located in British Columbia.

READ:  Causes and Effects of Most Common Air Pollutants

Fact 6: The Rockies are home to Yellowstone National Park, the second oldest National park in the world, and the oldest ones in the United States.

Fact 8: The best record of Cambrian animal fossils available to date is from the Burgess Shale, a fossil-bearing deposit found in British Columbia’s Yoho National Park.

Fact 11: Set in the Rocky Mountains of south-eastern British Columbia, Kootenay National Park is the only Canadian park with both glaciers and cactus plants.

Fact 13: One of the world’s restless giant volcanos is in Yellowstone National Park. Erupted about 640,000 years ago, the Yellowstone supervolcano has an eruption of magnitude 8 on the Volcanic Explosivity Index (VEI).

Fact 15: The Rocky Mountains are a wildlife paradise. They are home to as elk, moose, pronghorn, mountain goats, bighorn sheep, black bears, grizzly bears, coyotes, lynxes, and many other animals. Alberta-British Columbia foothills forest is where the largest herds of moose in North America is.

Fact 16: Rocky Mountain spotted fever was first identified in 1896 in the Snake River Valley on the southwest side of the Rocky Mountain.

READ:  10 Easy Ways to Protect Yourself From Air Pollution

This tick-borne disease is commonly seen in South-eastern and south-central parts of the United States.

Fact 18: Big Thompson River winding through Rocky Mountain National Park – it’s a sight to behold. But when it flooded in 1976, that was the most fatal disaster in Colorado’s history. In 2013, it flooded for the second time and caused $2billion in damage.

Fact 19: Peace River is the only river that penetrates the Canadian Rockies. Other rivers that originate in the range include the Bow River, Fraser River, Columbia River, North Saskatchewan River, and the Athabasca Rivers.

Fact 20: Kimberly, the mining town, located in the Purcell Range of the Canadian Rockies, produced close to 75% of the lead used the Allied forces in World War II.

Fact 21: Rocky Mountains’ climate is so unpredictable that snow can fall as late as June or July at high altitudes.

Depending on the landscape and time of the year, the temperature can jump between 35°C to -39°C. If you have hiking plans, pack appropriately.

Fact 22: One of the highlights of the Canadian Rockies is the hot springs. There are three major hot springs hotspots – Banff, Miette, and Radium – each different yet stunning.

Fact 23: Colorado’s largest and deepest natural lake, the Grand Lake, is a must-see in the Rocky Mountains. Ute Tribe called it the Spirit Lake as they believed that souls of the ancestors reside in its cold waters.

When you are in Colorado Rockies, visit the Grand Lake early in the morning, and you’ll see why it’s called Spirit Lake.

Fact 24: The Columbia Icefield, the largest sub-arctic icefield in North America is in the Canadian Rockies. It is actually the remnant of a large ice mass in Western Canada.

It feeds eight major glaciers including the Athabasca Glacier – the most visited North American glacier.

Fact 25: Sedimentary rock such as shale and limestone layer form the Canadian Rockies, whereas the American Rockies are made up of metamorphic and igneous rock, such as granite. 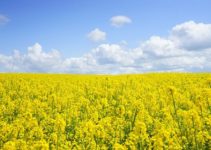