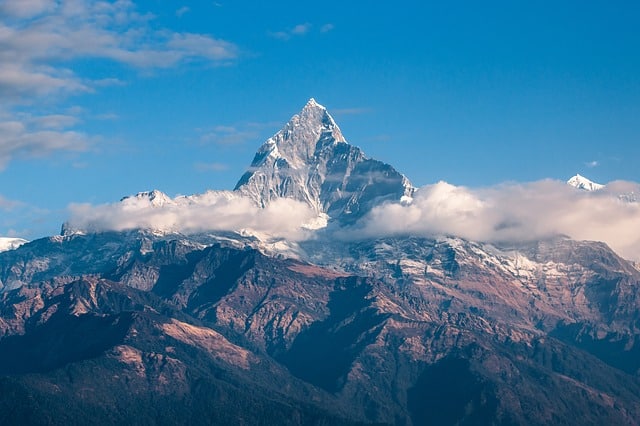 The Himalayan Mountain stretches from Mainland China in the East to Pakistan in the West across Nepal, Bhutan, Tibet and Northeast India. The western anchor of the Himalayas lies in Pakistan to the South of the Indus River, while its Eastern anchor is Mount Namcha Barwa to the west of the great Bend of the Yarlung Zangbo River. Specific locations of the Himalayas in Asia are as follows:

Location of The Himalayas in Tibet

Starting from Ngari Prefecture at the west to Nyingchi prefecture in the south-eastern region, the Himalayas fringe Tibet in a huge arc along the region’s western, south-western, and southern borders with India, Nepal, and Bhutan. About 14 mountains in the world exceed 8000 meters, six of which are near Tibet, with one 8,000-plus meter mountain, Shishapangma, lying wholly within the region.

Along the Tibetan border  shared with Nepal, lies Mount Everest, Mount Lhotse, Mount Makalu, Mount Cho Oyu, and Gyachung Kang. Known as the Himalaya to the western world, in Tibetan the name translates as “The Land of Snow”.

Location of Himalayas in Nepal

It runs along the entire northern edge of the country, the Himalayas form the natural boundary between Nepal and China and form the border between the two countries. Nepal is home to about 31 of the many mountains in the Himalayan Range, with eight of the fourteen 8,000-plus meter tall mountains being in Nepal.

Mount Lhotse, Mount Everest, Mount Makalu, and Mount Cho Oyu are shared with Tibet and lie directly on the Sino-Nepal border while Kanchenjunga is shared with India along the border with Sikkim in the east of Nepal.

Nepal has three of the 8,000 plus meter Mountains that lies wholly within its border, which are Dhaulagiri I, Manaslu, and Annapurna I.

Location of Himalayas in Bhutan

Located in the midst of the Eastern Himalayas on Tibet’s southern border, the Kingdom of Bhutan is a small Himalayan country that is the last real Shangri-La of the Himalayas. its Himalayan border along Tibet is just 470 kilometers in length. Only four (4) of the world’s 110 highest mountains (all over 7,000 meters) are on the border with China in Tibet.

Location of the Himalayas in India

India has a relatively small area of Himalayan Mountains when compared with other countries in Asia. Arunachal Pradesh in the east and Sikkim have short areas of mountains on their northern borders with China, while Himachal Pradesh and Uttarakhand in the north have the longest section of mountains.

Below are some interesting facts about The Himalayas:

Fact 2: Mount Everest is referred to as ‘Sagarmatha’ by Nepalese people. This literally means ‘Goddess of the Universe’. Tibetans refer to Mount Everest as ‘Chomolungma’. Mount Everest is named after a British Army officer, Colonel Sir George Everest who was India’s surveyor General for 13 years from 1830 to 1843.

Fact 3: Due to its length, the Himalayan mountain system stretches across six countries in total. The countries are: Bhutan, Afghanistan, India, Pakistan, Tibet and Nepal.

Fact 4: Total area of land covered by the Himalayas is about 612,021 square km., which represents 0.4% of the total land area on Earth.

Fact 5: Many large perennial rivers in the world have The Himalayas as their source. Such rivers can classified as: The Ganges-Brahmaputra river system and the Indus river system.

Fact 6: The rivers on the western side of the Himalayas make up The Indus river system. Indus is the largest of all the rivers on that other side. The Indus river, along with other western rivers like Sutlej, Beas, Chenab, Jhelum and Ravi etc come together to form the Indus Basin. Indus comes from Tibet, flows southwest to enter India and then moves to Pakistan to finally drain into the Arabian Sea.

Fact 7: The other river system, known as the Ganges Brahmaputra system consists of three main rivers – the Yamuna, Brahmaputra and The Ganges. Brahmaputra’s origin is also in Tibet. River Brahmaputra and others meet in Bangladesh to finally drain through the largest known river delta in world – the Sunderbans into the Bay of Bengal.

Fact 8: Himalayas is the home of several high peaks. It holds a record of the maximum number of highest peaks among any mountain range in the world. Out of 14 heights peaks in this world, The Himalayas hold 9.

Fact 9: The Himalayan Mount Everest is the highest peak in the world above sea level. It stands at 8,850 meters or 29,035 feet.

Fact 11: The Himalayan Mountain region are geologically active, thus, the region is prone to natural phenomena such as tremors, landslides and earthquakes.