What is a Sandstorm?

We may have heard about sandstorms at one point in our lives. While it is common knowledge that it comprises of sand and that it could cause several adverse effects towards the environment and the well-being of the people, there are still a lot of things that we do not know about the phenomenon. On this article, we are going to describe a sandstorm and its causes and effects, including several interesting facts about it.

A sandstorm is described as a natural phenomenon that occurs when a strong wind, such as a gust front, blows fine sand particles and dust from a dry surface. These particles become suspended in the air, causing erosion where they initially were. The wind drops these particles in another place where silt is formed. 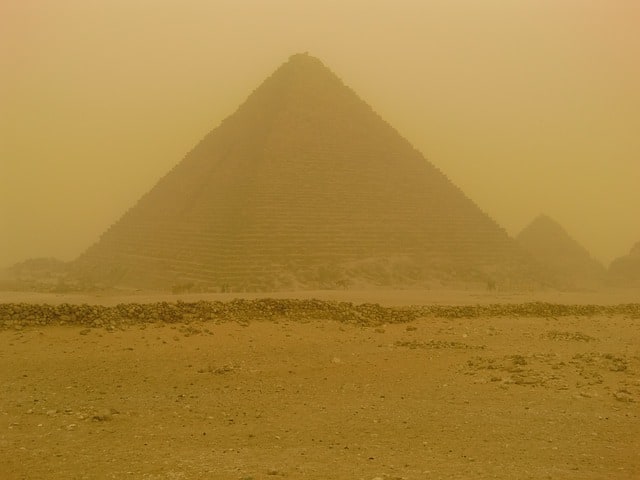 Also known as a dust storm, a sandstorm is common in arid and semi-arid regions. The primary terrestrial sources of airborne dust include the drylands around the Arabian Peninsula and North Africa. The Takla Makan and Gobi desert of China, and the Sahara desert also experience sandstorms.

A sandstorm is usually confined to the lowest ten feet. It rarely rises to more than fifty feet above the ground. The sand particles which are picked up by the sandstorm are larger than dust particles. They usually fall out of the storm more rapidly, causing it to launch not far from where the sand was initially at.

It is thought that the particles also fall to the ocean, significantly affecting the marine ecosystem. It is worth noting that the frequency of sandstorms has been increasing, albeit a well-known meteorological phenomenon since the ancient times. It has raised several health and environmental concerns due to the gravity of its surge.

What Causes a Sandstorm?

As mentioned earlier, a sandstorm is caused by strong winds that blow over loose sand particles. The force of the wind makes the sand particles vibrate. The particulates are then eventually carried up before being brought down to the ground again. This process is called saltation. As saltation is repeatedly done, these particles break into smaller particles. Once they have become fine particles, they begin to travel through suspension.

The strong winds that blow these particulates off the ground are usually formed by the outflow of rain-cooled air which was produced by a severe thunderstorm. A dry cold front could also produce sandstorms. Dry cold fronts are cold fronts that do not produce precipitation because they move into a dry air mass. In deserts, sandstorms are commonly caused by the outflows of a thunderstorm, or by a strong pressure gradient.

At several times of the year, sandstorms become more prevalent in desert regions because the intense heat mixed with the air makes the lower atmosphere more unstable. This instability of the lower atmosphere combines with the winds found in the middle portion of the troposphere. The mixture produces strong winds down to the surface.

Sandstorms are notorious for their harmful effects, especially towards the environment, health, economy and the livelihood of people.

Primarily, increased sandstorms have caused loss of topsoil in several countries such as Chad and Burkina Faso. Soil erosion has also been one of the effects of such storms. This accelerates the process of land degradation. Moreover, desertification of grasslands has started to occur in several portions of the world, including northern China.

Sandstorms carry with them large volumes of sand and dust. But more than sand, they also carry with them virus spores that interact with the atmosphere. Because of this, the spread of diseases has become prevalent around the world.

READ:  20+ Solid Reasons to Stop Deforestation That You Need to Know Today

Other immediate effects of sandstorms towards the health of people include the worsening of lung functions in people who have asthma. Due to inhalation of large amounts of dust, dust pneumonia could be developed. Diseases such as silicosis could also develop from prolonged exposure to sand. If left untreated, it will eventually lead to asphyxiation and lung cancer. The eyes could also be affected by the particles. Keratoconjunctivitis sicca, or dry eyes, could develop which could lead to blindness. It has also been reported that exposure to sandstorms could have adverse effects on the circulatory system.

In terms of agriculture, sandstorms have shown adverse effects towards the crops and livestock. Due to increased sand, plants may have lost some of the tissue essential in photosynthetic activity. This has been one reason for the delay of plant development. Furthermore, many of seedlings have been buried under sand deposits. Livestock, on the other hand, increased in injuries, reducing their productivity.

The soil itself has also lost its levels of productivity. Potassium and Phosphorus, some of the essential soil nutrients, could lose due to the suspension of soil to other distances. It is worth noting that the transfer of phosphorus could provide benefits. The accumulation of sand from the Sahara desert to the Amazon Valley has brought at most 4 kilograms of phosphate.

Sand could enter into various equipment and houses, affecting the lifestyle of people. It is worth noting that sand could be harmful to machines. Hence, when much sand has entered the pieces of machinery, their abrasive characteristics could ruin them.

Here are fascinating things about sandstorms that you may not know.

Fact 1: Sandstorms have been reported to be the third weather condition in the United States to have caused severe harm to people.

Fact 2: The Dust Bowl of the 1930’s was thought to be one of the worst sandstorm surges of North America, severely damaging the agriculture and the ecology the Great Plains. Millions of dust have swept over topsoil, leading to reduced farming for several years. The sandstorms have caused erosion and drought which affected more than 100 million acres of land.

Fact 3: Haboob is an Arabic term which is used to call the intense sandstorm that is carried on a weather front. It is common in Africa, the Middle East, and in North America.

Fact 4: In the last ten years, more than 100 sandstorms were reported to have surged in the U.S. state of Arizona alone.

Fact 5: The sand that was blown from the Sahara Desert over the Atlantic Ocean has helped make fascinating sunrises in several places including Miami, Florida.

Fact 6: Sediments from across the Atlantic Ocean have also helped fertilize the Amazon forest. The iron and phosphorus which was carried with the sand have helped compensate for the inadequate nutrient levels of the Amazon caused by the rain that has leached them out.

Fact 7: Sandstorms do not also happen on Earth. It has also been reported that dust storms also occur on other planets like Mars. These storms are more extensive than the sandstorms which occur on Earth, some of which could encircle the whole planet.

Fact 8: At present, there are about 80 sandstorms that occur in Mauritania every year. This is a lot more than the number of dust storms which took place in the same country in the early 1960’s which is only two.