Ospreys are beautiful birds known as the sea hawk, fish hawk, or river hawk. The bird features large legs, hooked talons, and a reversible outer toe. Ospreys may also be able to close their nostrils when they dive into the water. The bird also has a slender body with a sharp beak to catch prey.

They also have strong wings that allow them to fly higher and come out of the water with heavy prey in their mouth. As soon as they catch their prey, they use their black bill to consume it with a sharp hook.

Generally, Ospreys love to prey on fish. Since you may find them close to the water in any area, you may feel that Ospreys can swim. But Ospreys cannot swim. Only when these birds want to locate a fish and eat it can they be found near water. That is why many people mistake them for being good swimmers.

Naturally, they prefer locating their prey from above the waters. However, if they have to go a bit further, they might end up in the water. But that doesn’t make them like swimming at all. Once they catch their prey, they are likely to fly away.

Let us learn more about these birds as we continue to scroll through for more.

Does an Osprey Swim in Water?

However, if they find a fish, they try to dive feet first to catch them. As soon as they catch hold of the fish, it will orient the fish by the head, which helps it to minimize wind resistance.

So, you will always find Ospreys flying slowly over the water. Till they are near the water, they will use their yellow eyes to locate the prey. They can even make a dive from around 30 to 120 feet above the water. But in many instances, it has been found that Ospreys struggle with water when holding a heavy fish.

Although this happens only a few times, such situations have been spotted before by many individuals. Also, during this time, they try to close their nostrils so that they do not get water into them. Otherwise, they can have a hard time dealing with it.

Where Do Ospreys Live?

Ospreys live in many places, to be specific. Some studies have found that Ospreys are widespread in Antarctica. Since they are migrating birds, they may go from one place to another during the different seasons.

During the summers, you may find Ospreys breeding in North America. They may also migrate to the Southern United States as preferred. Central and South America are their favorite go-to places during the winter season. Naturally, they are more diverse and widespread than most other bird species found around us today.

Many Ospreys also nest in Eastern North America. You may find them migrating along the southeastern region. Florida, Hispaniola, and Cuba are some of the places they migrate from. You may also find many of them located in the Caribbean Basin during the winter months.

However, those Ospreys who live in the western areas of North America don’t seem to migrate enough compared to the others. Many of them are also found in Brazil. So, you are likely to find a long list of Osprey birds flying to and fro from one beautiful place to another.

Does an Osprey Eat Squirrels?

Yes. Ospreys do eat Squirrels. However, they don’t do it regularly. Over the years, Ospreys have only been caught eating Squirrels a few times. But if they find any squirrels near the water, they will most likely chase them and eat them away.

They also eat dead fish and snakes occasionally. Since 99% of their diet consists of fish, they generally try to consume fish as far as possible. So, when they are trying to catch their prey, you will mostly find them near or above the water.

It is also likely for them to consider eating Squirrels or other animals when they have been hungry for a long time and simply can’t find a heavy fish to feel complete.

Ospreys may also eat lizards and insects on rare occasions. Generally, they start by attacking their heads and then use their sharp hook to eat them away.

Typically, they are solitary birds, but sometimes they may also come to feast on different animals together. You are more likely to see these creatures feasting on other animals early in the morning.

What is the Lifespan of an Osprey?

Ospreys have a good lifespan of around 7 to 10 years. But the oldest living Hawk was known to have lived for nearly 32 years. It is not that bad after all. So, sometimes, individuals can also grow up to live for around 20 to 25 years.

However, sources suggest that many juvenile ospreys die at a very young age. So, before they mature, they are likely to be dead in most cases. But if these birds reach their breeding age, then the average life may also be eight years. The Osprey chicks may learn to fly after around two months.

The longest-living female Osprey also went on to live for around 24 years. So, it is natural that they have a high average life expectancy compared to the remaining raptors. But due to many reasons, these Ospreys are becoming rare.

The climate changes that leave them with minimal food leave negative imprints on their average life expectancy. Although they are highly migratory birds, they may have to go longer miles in search of food. This can harm the overall well-being that eventually leaves them with no option but to die.

Yes, Ospreys are great at migration. They can travel miles and miles during both the summer and winter seasons. Different places, as discussed above, like Brazil, Antarctica, Asia, and other places, are some of the best destinations for them to be found.

Generally, ospreys keep returning to their nests every once a year or so. When they arrive there, both the male and female ospreys update the nest using different materials that are more convenient for them to use. From mid-march to the end of the summer are the ideal months to see them migrating.

Male ospreys generally migrate faster than females. They do this to set up their territory near the lakes. This enables them to catch fish more appropriately. After that, they wait for the females to arrive. The young ones can fly for nearly 50 days after they are hatched. When the return migration begins, females start first. Then the males follow them in the process.

The Sahara Desert, Spain, and France are some of the many places where they migrate. Generally, they travel by the day. But they use thermals to gain height over the land. Since they are gradual migrators, they may take around a week or so to migrate, even in the closest places.

There was a time when Ospreys were declared an endangered species by the Endangered Species Act. However, they have had a fantastic conversation story that has saved them. However, they continue to be a threatened species due to pesticides that are constantly putting them in danger.

During the 1950s to 1970s, when this species was endangered, it was the product of the harsh use of pesticides. As a result, many of these birds were poisoned, of which some were thinned from eggshells, and the nests failed to be appropriately made. As such, Ospreys had reduced to a widespread extent.

Later, when people realized that the lives of Ospreys were being threatened, they decided to ban the use of pesticide DDT. That is when the population of Ospreys began to bloom again. Later, the government started creating artificial nests for these Ospreys and helped its population evolve again.

By 2015, they began to be seen in more and more places without any inconvenience. So, Ospreys are now well protected under the Migratory Bird Treaty Act. Also, it is illegal for any human to export, import, sell, or purchase these birds under any circumstances.

Ospreys are a treat to the eyes when you see them. Although they look very similar to an eagle, they are not. They are beautiful birds that migrate from one place to another during different seasons. Today, you will be able to see Ospreys in many other regions around the world.

If you live in America, Europe, and Africa, you will be able to find them located near you more abundantly. So, why keep waiting? Enjoy watching them migrate from one place to another. It is a moment to cherish for a lifetime. 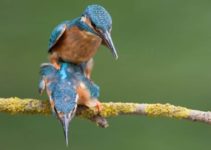