How Can Animals Drink Dirty Water?

The “clean-water” problem is there everywhere. Humans easily contract diseases from dirty, contaminated water. What about animals? Can they drink dirty water? Do they get sick? Are humans the only animal that requires “clean water”? Let’s find the answers. 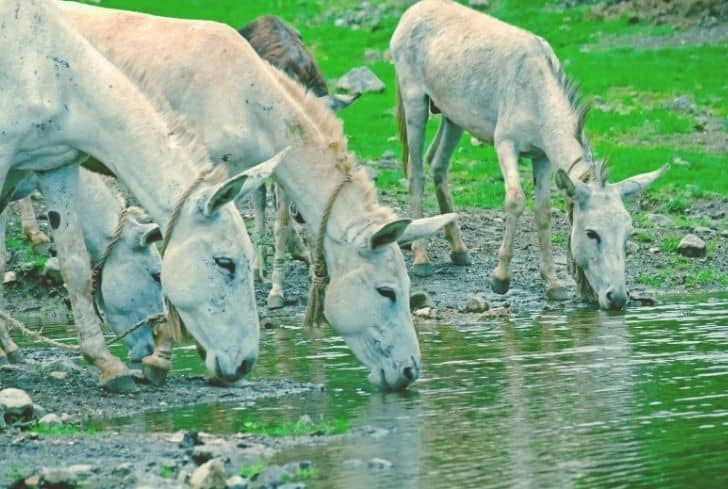 There are many layers to this question. First, there are only a few handfuls of water bodies in the wilderness and many are ‘dirty’ according to human standards. Wild animals rely on the same dirty ponds or streams to quench their thirst. Regular consumption from the same or similar source will help animals ‘get used’ to the dirty water and develop a sort of resistance against certain bacteria in it. Over time, their immune system adapts and builds endurance.

This is only true when the microbial population in the water bodies is stable. If there’s a sudden change in microbial profile in a particular waterbody, of course, the outcomes will be deadly. The survivors will then pass the ‘resistance’ to their offspring and develop a tolerance towards dirty water.

Second, not all water bodies are dangerously contaminated. Plus, not all microbial illnesses are fatal enough to kill animals.

Third, most animals have an extraordinary sense of smell which helps them determine whether to drink or abandon the idea of drinking from a particular water source.

Why Animals Do Not Get Sick After Drinking Dirty Water?

There are several answers to this question:

How do Animals Drink Water?

Cats, canines, and ruminants curl their tongue backward while dipping it in the water and then quickly pull it up – a movement called lapping. Domestic cats move their tongue quite faster, 3 times per second, which allows them to drink a moderate amount of water.

READ:  20+ Weird Facts About The Dolphins That Might Surprise You

All the other big cats such as jaguars, lions, cheetahs, and leopards follow the same drinking technique but a slower pace which allows them to drink more water. When dogs lap the water up, they spill water all around whereas cats are neater drinkers as they touch only the surface of the water with their drinkers.

Elephants use their long trunk to drink. They suck the water up like a straw and squirt the water into their mouth.

Bats send squeaks and listen for the bouncing echoes to detect water sources. Then they will dive in and scoop up a sip into their mouths. They rarely use their sight to locate and determine the place of water.

Zebras in the wilderness need more water – more than a gallon at one time. Just like horses, they put mouth below water level and then suck the water up.

Most birds drink some water every day, but they don’t drink the way animals do because of the difference in anatomy. For one thing, they lack lips and cheek. Most birds drink by filling their bill with water then tilt the head back to send water right into the stomach. However, birds can lap water into their bill just like cats and dogs do. Pigeons and doves are exceptions as they can suck water while their head is down. They don’t need to tilt head upward to swallow.

Marine mammals meet their water intake with their food while the marine birds and reptiles drink saltwater but will excrete it through special glands.

How do Animals Know to Drink Water?

The same way we humans do. The answer to what makes animals thirsty and how do they know to drink water lies at the central nervous system.

When the animal body starts to run low on water, a series of physiological changes take place. Scientists found that a specialized part of the animal brain called lamina terminalis guides the thirst responses. The cells within this region also collect and monitor information such as whether the animals have fed or drunk recently, changes in body water and salt levels, blood volume, etc. The output is then transmitted to other parts of the brain and motivates an animal to seek water bodies.

What Animals Drink the Same Water We Do?

All organisms have the right to clean water and animals aren’t any exception. But unfortunately, animals don’t have the luxuries that humans do when it comes to water quality. In the wilderness, they will be forced to or adapted to consume water with dust, slit, foul taste, or contaminated with bacteria or protozoans.

Water quality is one of the many factors determining the volume of water animals consume. Dirt or foul odors, for example, may discourage them from drinking. Some species exhibit tolerance to dirty, murky water whereas some others develop diseases and die.

Talking about what animals drink the same clean water we do, the answer is none (well, our pets and farm animals are the only exceptions).

Which Animal Drinks the Most Water?

The land mammal that drinks most water per pound of its body weight is the cow. An adult cow used for milk production can drink up to 100 gallons of water a day. In the case of lactating mothers, this number can even increase two-fold, especially during hot summer months.

Which Animals Don’t Drink Water at all?

Most animals need water for survival. However, the animal kingdom has some species which do not or rarely drink water.

How Much Water do Wild Animals Drink in a Day?

The answer to this question depends on several factors such as,

Most wild animals, especially predators, have a fast-working digestive system, which allows them to gorge themselves and then go for seconds shortly after. If readily available, they will drink water every day; at the same time, they can also go 4 – 5 days without drinking water. When drought hits, they rely on the body fluids of the prey to meet the moisture requirement of their body.

Listed below are some animals and their water consumption in gallons/head/day: