How Do Birds Mate?

When birds are ready to mate, both males and females look for the best possible partners. After finding a suitable mate, the sex act is surprisingly quick. Most male birds don’t have penises; rather, both male and female birds have what’s known as a cloaca.

The cloaca is an internal chamber with an opening, and through this opening, a bird’s sex organs, testes or ovaries discharge sperm or eggs. This same opening also serves to other purposes: the expulsion of urinary and digestive waste. 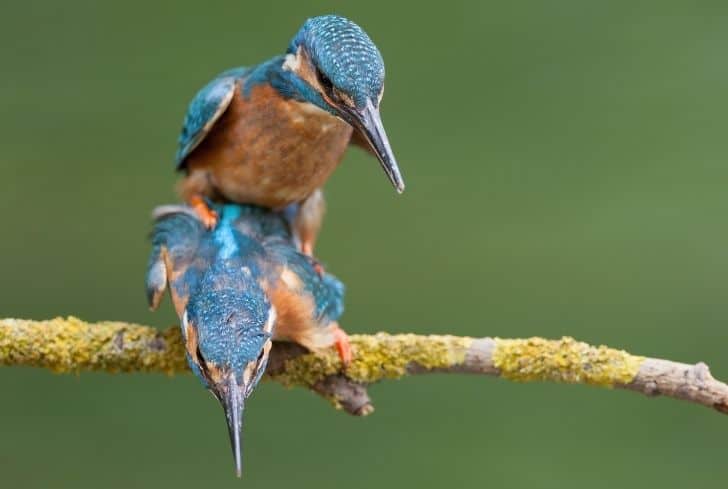 During breeding seasons, the cloacal openings of both male and female birds become swollen, reaching its peak size, protruding slightly outside their bodies. It’s the area around the cloaca when the time is just right to reproduce, which is sometimes called a “cloacal kiss.” To start mating, the male perches on top of the female, who, in response, exposes her cloaca by moving her tail feathers to the side. Arching back, the male usually rubs his cloaca against that of the female.

That simple contact lasts only a second, but that’s long enough for the male’s sperm, which has been stored in his cloaca, to transfer to the female’s, which then travels up the short passage to fertilize her ova and thus the egg formation will begin.

How Do I Know if my Birds are Mating?

Many birders don’t recognize the mating behavior of birds right away. However, there are certain mating postures that the male and female birds follow. The male birds follow a typical posture that is to balance on the female’s back, both facing the same direction. To make access easier for the male bird, the female may bow, crouch, hunch, or even lay on the ground, after which the male hunch or arch in order to touch his cloaca to hers.

Witnessing birds mating can be startling; however, it is important to keep distance and not disturb their actions. In case birds are frightened or stressed while mating, the mating could be less successful as they may not complete their bond.

Birds might even abandon an otherwise ideal habitat to raise their young, and without the best resources and food supplies, the chicks may have less chance of survival.

If you recognize a bird’s mating, stay alert for the next few weeks to see the entire life cycle starting with the building up of a nest. Following that, eggs are incubated, and young birds hatch and begin to explore their new world.

Can Birds Mate With Other Species of Birds?

Many birds mate with members of other bird species occasionally, producing hybrid offspring. About 10% of the 10,000 bird species in the world are known to have bred with any other species at least once, maybe in the wild or in captivity, according to Irby J. Lovette, the Director, Fuller Evolutionary Biology Program, Cornell Lab of Ornithology.

A bird is called a hybrid when it has two different species as parents. The resulting bird can have any combination of characters from the parent species, and that can be totally identical to absolutely different. Usually, intermediate characteristics between the two species can be seen in the bird hybrid. Hybridization tends to occur between species that are closely related, and there are some groups of birds that are particularly prone to hybridization.

A “successful” hybrid is one that demonstrated the ability to produce fertile offspring. About 16% of all wild bird species have been known to hybridize with one another according to the most recent estimates. When captive hybrids are taken into account, the number increases to around 22%. Several bird species hybridize with multiple other species.

For example, the Mallard (Anasplatyrhynchos) is known to interbreed with at least 40 different species. Mallards, whether of wild or domestic origin, hybridize with other ducks so often that multiple duck species are at the brink of extinction because of it. In gulls, “Olympic Gulls”(Western × Glaucous-winged Gulls) are particularly common; these hybrids are fertile and maybe more evolutionarily fit than either parent species.

At least twenty different hybrid hummingbird combinations have been reported, and intergeneric hybrids are not uncommon within the family. Other examples are gamebirds, domestic fowls, waterfowls, ducks, wood-warblers gulls, songbirds, hummingbirds, macaws and birds-of-paradise.

How Long are Birds Pregnant For? (How Long After Mating do Birds Lay Eggs?)

During the first stage of development of the embryo, the eggshell develops; pigments are added at last. Ovulation and laying take about 24 hours; therefore, female birds typically produce at most one egg per day.

Can a Bird Lay an Egg Without Mating?

Unwanted egg laying is a common issue for pet birds. This occurs when a pet bird is not meant for breeding or production and, often without a mate, starts egg-laying activity. It is very common with cockatiels but can also be found in other species.

Many owners hardly know the sex of their bird or the fact that birds without a mate can also lay eggs. There are many different signals in their environment that stimulate birds to lay eggs. The natural history of these fascinating birds gives us insight into how their bodies function for reproduction and mating.

In the wild, animals face a trade-off between individual survival and reproduction, which means reproducing has an energetic cost. This trade-off is evident in several ways, but the most vital one for pet birds is that resources they have are of limited amount that they must divide between self-maintenance and reproduction.

Although we do not restrict food and water seasonally for our pets, these mechanisms evolved over many thousands of years and are still part of how their bodies work. In many cases, the decision to lay eggs is not a conscious one, but a biological one.