What is a Cape Landform?

The Cape is a promontory or headland meaning an elevated portion of large size of land that extends for a substantial distance into water bodies like a river, lake, and usually an ocean. Capes are generally a coastal feature, but there is a distinct change in the trend of the coastline in the shape or the composition. Therefore for centuries, capes have been used as critical navigational landmarks by sailors. Most capes come from elevated land above the water; consequently, steep cliffs are common features of many capes. Major capes sometimes also serve as points dividing oceans. 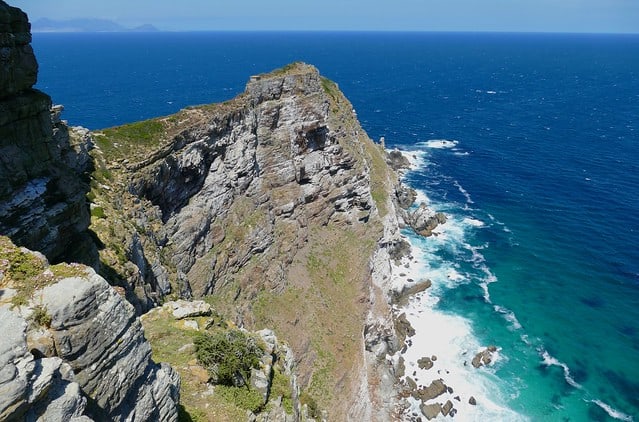 How are Capes Formed?

Capes are formed through many different processes and forces, including the action of waves for tidal forces, movements of glaciers or rivers or ocean currents, volcanic activities, and changes in the sea level. The proximity of the capes to the coastline makes them prone to different natural forms of erosion, mainly tidal action. In all of these methods, erosion plays a significant role. The formation of Cape can be understood from the nature of building materials of the Cape.

The coastline confronts tidal forces from the ocean continuously. Many shores are made up of different kind of rock materials with varied hardness. The waves erode the softer rocks and sand over time, leaving a stretch of land of hard rocks, which forms a cape with an undefined shoreline. Thus rocky capes are carved out due to erosion by ocean currents.

The erosion of the coastlines forms most capes; however, some are developed by building up of the shoreline. Near the coast the currents flowing to different directions when get converged in a shallow area, the sand is pushed together, forming a landmass. The sand gets compacted to sandstone over the years. These sandy capes do not last as long as they are vulnerable to erosion.

Similarly, a cape is formed when two ocean currents clash and deposit fine materials like gravel, sediments at their meeting place. Over the time sediments pile up and result into a pointed landform projecting into the sea, and thereby form sandy Cape.

READ:  Sinkholes: How Do They Form and Types of Sinkholes

When glaciers carve their way into a land area, they deposit earthen material called moraine consisting of gravel, sand, and sediment after they melt away.

Cape of Good Hope is one of the most famous historic capes. It is a rocky promontory located along the Atlantic coast surrounding Cape Peninsula, South Africa. This rocky point is at the southern tip of the Cape Peninsula and marks the end of the Peninsula extending from the western coast of South Africa. Cape of Good Hope is part of large continental landmasses. At this point, the coastline turns eastward into Africa’s southern tip.

The Cape of Good Hope has diverse flora and fauna ranging from rocky mountain tops to beaches including the open sea. It is home to a minimum of 250 bird species along with African penguins. Being a section of Table Mountain National Park, it is also home to antelope, Bontebok, eland, red hartebeest, Grey rhebok, Cape mountain zebra and several other small animals.

Mammals, especially Chacma baboons, are most intimately associated with the Cape. It is also an indispensable part of the Cape Floristic Kingdom which is the smallest but most productive of the six floral kingdoms of the world comprising of a treasure trove of 1100 species of indigenous plants.

This geographic Cape extends into the Atlantic Ocean from the southeastern corner of Massachusetts mainland, in the northeastern United States. It extends around 65 miles eastwards into the Atlantic Ocean with the exterior portion turning towards the north and then toward the west like a hook. Cape Cod Canal is an artificial channel of 17.5 miles long which was primarily built for boat traffic in Cape Cod.

Cape Cod was formed by glaciers which carved its way through the North American landscape during the last ice age. The moraine piled up in front of and on either side of the glacier. When the glacier melted and retreated, the piles of land emerged as a cape of fishhook-shape.

READ:  What is Coriolis Effect and How it Affects Global Wind Patterns

It is very popular and attracts tourists in large number from all over the world during summer months due to its ample maritime and historic beaches, villages, and towns. It also offers good restaurants, outdoor activities like beach walking, whale watching, biking, boating, sport fishing, go-karts, golfing, miniature golf, kayaking, visit sanctuary art museum and music festival and unique shopping.

Located on the small Island called Hornos, it is the Tierra del Fuego archipelago’s southernmost headland in southern Chile in South America. This Cape marks the northern boundary of the Drake Passage and also the confluence of the Atlantic and Pacific Oceans.

The Dutchman Willem Schouten named the Cape Kaap Hoorn after the city of Hoorn in the Netherlands. It had been a significant milestone on the clipper route for decades for carrying trade around the world by sailing ships. The Cape became notorious as a sailors’ graveyard because of its hazardous water along with strong currents, strong winds, large waves, and icebergs.

When the Panama Canal opened in August 1914, the sailing of boats and ships were significantly reduced round this Cape; however, it remains a part of the world’s fastest sailing routes.

Yachting in the waters of Cape is still one of the major challenges in several favorite ocean yacht races, like Volvo Ocean Race, the VELUX 5 Oceans, and the Vendée Globe, where recreational sailors sail around the world via the Horn.

In the state of Western Australia, Cape Leeuwin is the extreme south-western mainland point of the continent of Australia. The Cape Leeuwin Lighthouse is there on the headland of the Cape along with many other buildings used by the lighthouse keepers. The Cape is considered as the confluence point of the Indian Ocean, and the Southern Ocean in Australia but the Southern Ocean was thought to exist only south of 60°S by other nations and bodies.

Now the hillside and the land nearby to the west of the lighthouse is part of Leeuwin-Naturaliste National Park. It is the habitat of bird species, and a very high number of plant species are found in the extensive heath vegetation and thick shrubs.

According to the International Hydrographic Organization, this rocky headland located in the Western Cape, South Africa is considered as the extreme geographic southern portion of the continent of Africa and the starting point of the line dividing the Atlantic and Indian Oceans. Cape Agulhas is also regarded as one of the great capes.

The sea off Cape Agulhas is notorious to sailors for violent winter storms and large rogue waves, ranging up to 30 meters (100 ft) high capable of sinking even large ships. Furthermore strong winds, cold Antarctic Circumpolar conflicting currents of different water densities, west winds and shallow waters make the conditions here even worse. It is believed that nearly 150 ships have sunk around Agulhas.

The sea in this area is world’s one of the most productive fishing grounds. The lighthouse which is now a museum was built in 1848 and is the second oldest in South Africa. Although Cape Agulhas is not as scenic as the dramatic coastline, this is a place for travelers to breathe in the crisp sea air flowing on the gently sloping rocky beaches, and to snap a photo capturing the small cobalt blue sign of meeting point of the Atlantic and Indian Oceans.

Difference Between a Cape and a Peninsula

Capes are similar to Peninsulas but considered to be smaller and narrower unlike peninsulas by most geographers. A cape can also be developed at the end of a peninsula.

The geologic lifespan of Cape is short compared to Peninsula due to the frequent erosion, especially tides.

Besides, capes vary in size, and a coastline of a country can have several capes, unlike Peninsula.