What is Solar Eclipse?

If the Moon orbited the earth in a perfect circle, a total solar eclipse would occur every new moon. But since the Moon has an additional five (5) degree orbit compared to the Earth’s around the Sun, this doesn’t occur. The Moon’s orbit has to cross Earth’s ecliptic plane so either a solar or lunar eclipse can occur. Moreover, the Moon’s orbit is actually elliptical, not circular, this results in its apparent size not being large enough to completely block the Sun. 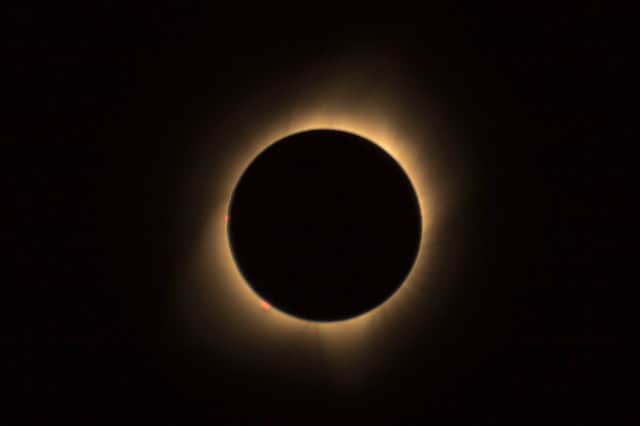 “A solar eclipse (as seen from the planet Earth) is a type of eclipse that occurs when the Moon passes between the Sun and Earth, and when the Moon fully or partially blocks (“occults”) the Sun. This can happen only at new moon when the Sun and the Moon are in conjunction as seen from Earth in an alignment referred to as syzygy. In a total eclipse, the disk of the Sun is fully obscured by the Moon. In partial and annular eclipses, only part of the Sun is obscured.”

The Earth and Moon’s orbital planes cross one another at lines of nodes which result in at least two (2) to five (5) solar eclipses transpiring each year. Despite this fact, the number of total eclipses that occur annually is still rare at any specific location since the phenomenon exists only along a tapered path on the surface of the Earth which is traced by umbra, or the Moon’s shadow.

Special eye protection is needed in order to directly look at the Sun during a solar eclipse. This is because directly looking at the Sun will lead to blindness and permanent eye damage. It is only theoretically safe to view the total phase of a complete solar eclipse with the unaided eye. However, this doesn’t mean it is safe since most people lack the proper training to recognize the different phases of a solar eclipse. A total solar eclipse can span over two (2) hours while the total phase lasts only a maximum of eight (8) minutes in a particular location.

Regardless of the fact that an eclipse of any type is a natural phenomenon, some cultures (both ancient and modern) have regarded them as bad omens and even attributed them to supernatural causes.

There are four (4) main types of solar eclipse. The first is the total eclipse which transpires when the dark shadow of the Moon completely blocks the sun. As a result, a much fainter solar corona becomes visible.

The next type of solar eclipse is annular eclipse. This type of eclipse occurs when the Moon and Sun are exactly in line with the Earth. However, since the apparent size of the Moon is smaller compared to the Sun, the Sun still appears very bright. As a result, the annulus, or the Sun’s bright ring, is clearly visible. The annulus surrounds the dark disk of the Moon.

And finally, the last type of eclipse is the partial eclipse which is the most common out of all the four (4) types of eclipses. This occurs when the Moon and the Sun are not exactly in one line with the Moon and Earth. As a result, the Moon only partially blocks the Sun.

In some areas of the Earth there are some total eclipses which can only be seen as partial eclipses because the umbra or Moon’s shadow passes above the polar regions of the Earth and never intersects the surface. Partial eclipses are often unnoticed in terms of the brightness of the sun since it takes well over ninety (90) percent coverage to notice any darkening at all.

Another type of solar eclipse transpires when the Sun is occluded by a body other than the Earth’s moon. This can also be viewed at points in space from the surface of the Earth. An example of this is when the crew members of Apollo 12 observed the Earth has eclipsed the sun in 1969.

The term, Central Eclipse, is often used interchangeable with hybrid, annular and total eclipses. But this is inaccurate, the definition of this term is an eclipse in which the center line of the umbra comes in contact with the surface of the Earth. Although extremely rare, the umbra intersects with the Earth and therefore creates a total or annular eclipse.

5 Phases in a Total Eclipse

There is a total of five (5) phases observed in a total eclipse. The first phase is called the First Contact. When this happens, the moon’s edge (or limb) is tangential to the limb of the Sun. The second phase is the second contact. This starts with a phenomenon called Baily’s Beads. This is caused when light shines through valleys on the surface of the Moon. In combination with this phenomenon is the diamond ring effect wherein nearly the entire disk of the Sun is covered.

The next phase is called the totality. Here, the Moon blocks the entire disk of the Sun leaving out just the Sun’s corona. The fourth phase is the third contact wherein the first bright light is now visible and the shadow of the moon starts to move away from the observer. Another diamond ring will transpire in this phase. Lastly, the fourth contact comes into play when the Moon’s trailing edge no longer overlaps with the solar eclipse.