25+ Amazing Facts About the Lunar Eclipse

Perhaps you have already encountered the full moon changing its natural off-white color into a bloody red hue. This might seem terrifying, especially if people have no idea of such occurrence. Sufficient knowledge would allow one to understand that such spectacle is only a lunar eclipse.

What is a Lunar Eclipse?

A lunar eclipse is a significant celestial phenomenon which occurs when the full moon passes through the shadow of the Earth. The shadow, or the umbra, blocks the light of the sun which supposedly reflects on the moon. The location of the moon relative to its orbital nodes affects the type and length of the lunar eclipse.

During a lunar eclipse, the full moon is reddish brown due to the fact that the light of the Sun bends through the atmosphere of the Earth and reflects off the moon.

Since the occurrence of a lunar eclipse is quite common, it is essential to widen our knowledge on such astronomical event. This way, people will have an idea of such situation if ever it happens. Here are 25+ amazing facts about the lunar eclipse. 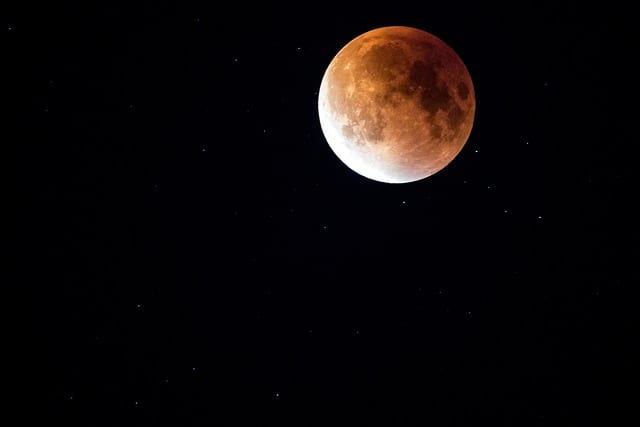 1. A lunar eclipse only happens when the Sun, the Earth, and the moon are precisely aligned, with the Earth situated in the middle. In astronomy, such occurrence is called “syzygy,” when three celestial bodies are configured in a straight line.

2. A lunar eclipse only transpires during a full moon. It also takes place only if the moon passes through some portion of the shadow of the Earth.

3. There are three types of a lunar eclipse: total, partial, and penumbral. The total lunar eclipse is the most dramatic. It is regarded as the blood moon because the moon looks reddish during the eclipse.

4. During a partial lunar eclipse, a portion of the moon is covered by the dark shadow of the Earth, giving the impression that the Earth’s shadow took a bit out of the moon. It only occurs when the three celestial bodies are not perfectly aligned.

5. A penumbral lunar eclipse is the least visible type since the moon is only shaded slightly by the faint outer shadow of the Earth.

6. An eclipse does not occur every full moon of the month. Since the moon’s orbit is tipped about five degrees to the Earth’s orbit around the sun, the moon could be found either below or above the plane of the Earth’s orbit most of the time.

7. A lunar eclipse could also be witnessed from the moon. The dark Earth would block the sun. This displays an outline of a brilliant red ring around the planet. This bright ring is actually the sun’s light scattered throughout the Earth’s atmosphere.

8. The brilliant light that is formed from the Earth and the sun is refracted on the moon, giving it a red glow instead of removing its light.

9. Aside from the refraction of light from the sun, the color of the moon looks reddish because of the particles in the atmosphere at the time of the lunar eclipse.

10. The duration of a lunar eclipse varies depending on the Earth’s shadow. According to scientists, a lunar eclipse cannot take place longer than three hours and 40 minutes. Some eclipses could even happen within 25 minutes only.

11. A lunar eclipse – whether total, partial, or penumbral – occurs two to four times each year, as the moon passes through some part of the Earth’s shadows.

12. Despite popular belief, lunar eclipses are relatively safe to watch with the naked eyes because they are fainter than the full moon. On the contrary, precautions should be taken into consideration when viewing solar eclipses.

13. Unlike a solar eclipse which could only be witnessed from specific locations around the world, a lunar eclipse could be viewed from any place on the night side of the Earth.

14. A selenelion takes place when both the eclipsed moon and the sun can be observed at the same time. This only occurs before the sunset or after the sunrise. Both the sun and the moon will appear at different areas in the sky just above the horizon.

15. The Danjon Scale could be used to identify the darkness of a total lunar eclipse. Gauging the darkness of the eclipse is done in points from 0 (where the moon looks almost invisible) up until 4 (where a bright yellowish orange color could be seen).

16. The next total lunar eclipse will occur on January 31, 2018, with an umbral magnitude of 1.315. It will be highly visible in geographic regions such as Asia, Australia, the Pacific region, and the western portion of North America.

17. In ancient times, a total lunar eclipse served as a bad sign to the people. To them, it meant that the gods were angry with the people. Others thought that a jugular eats the moon during eclipses, hence the red color.

18. Using his understanding of scientific facts, Christopher Columbus was able to accurately predict the occurrence of a lunar eclipse which took place in March 1504. He wanted to prove that the moon disappears so that the natives of Jamaica will give him and his crew the food they desired.

19. A lunar eclipse occurs more often than a solar eclipse. This is due to the fact that the shadow which is cast by the Earth is a bit larger than the moon.

20. The longest duration of the totality for a lunar eclipse tends to happen during the summer in the Northern hemisphere when the Earth is near aphelion, the farther point in the Earth’s orbit from the sun.

21. The longest recorded total lunar eclipse took place on July 16, 2000. The eclipse was visible in Australia, eastern Asia, and the Pacific Ocean.

22. According to Jean Meeus, it would not be until August 19, 4753 when there will be a much longer total lunar eclipse, with a projected duration of 106 minutes and 35 seconds.

23. The National Aeronautics and Space Administration or NASA has a website designed specifically for tracking the past and future lunar eclipse occurrences. The date of visibility of the eclipse and its location on the Earth where it will be visible are some of the many things found on the website.

24. Totality is the term used to describe the moon when it has completely disappeared or darkened. This event can only take place during a total lunar eclipse when the three celestial bodies are perfectly aligned with each other.

25. Lunar eclipses will be different millions of years from now. According to scientists, the moon is continually moving away from the Earth at a rate of around 1.6 inches every year. This motion will ultimately affect the way that the Earth’s shadow appears on the moon.

26. During a lunar eclipse, hundreds of hot spots have been reported to have appeared on large areas on the moon’s surface. These spots are described to be warmer than the surrounding areas. Although this occurrence has been studied for several years already, there is still no definitive explanation on why such hot spots exist.