What is a Thunderstorm?

A thunderstorm is basically a storm characterized by lightning and thunder. Also known as electrical storms, lightning storms, or thundershowers, thunderstorms are caused by an updraft that occurs when warm, moist air rises up into the atmosphere. Then, the updraft forms a cumulus cloud, which eventually becomes the thunderstorm cloud.

Thunderstorms are normally accompanied by heavy, strong winds, and at times, snow, hail, or sleet. Sometimes, they come with absolutely no precipitation. But how are thunderstorms formed? Read on. 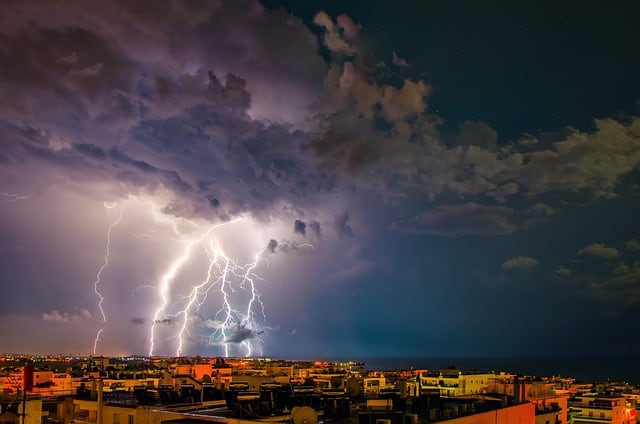 How a Thunderstorm is Formed?

The integral ingredients for making a thunderstorm are moisture, unstable air, and lift. Moisture is necessary for the formation of clouds and rain. The unstable air should be somewhat warm and able to rise rapidly. Lastly, the lift can form from sea breezes, mountains, or fronts. That’s said, let’s get into the details of how thunderstorms are formed.

Most thunderstorms undergo three phases in their formation, namely:

Stages of a Thunderstorm

Shall we explore stages of the thunderstorm?

Air near the earth surface heats up during the day as solar energy heats the ground. The warmed air then rises higher in the atmosphere. Note that warm air is less dense compared to cool air, and hence it’s lighter.

As more water from the rising moist air is added to the tiny water droplets within the cumulus cloud, the droplets continue to grow larger. The cloud darkens in the process. Likewise, the increasing droplets that form the cloud become heavy.

Eventually, the rising air can no longer hold up the heavy droplets. Consequently, raindrops begin to fall through the cloud. In the meantime, cool dry air descends in the cloud, knowns as downdraft. The downdraft pulls water downward as rain.

The combination of the updraft, downdraft, and rain, results in the formation of a cumulonimbus cloud. The cycling of air up and down is known as a thunderstorm cell. As air molecules move within the cloud, sliding past each other, they generate electric charges, which build up to form lightning.

The sound you hear when lightning strikes is what is known as thunder. It normally occurs after you see the bolt of lightning. The simple explanation to that is that light travels much faster than sound.

After around 30 minutes, the thunderstorm starts to dissipate. This happens when the downdrafts start to overpower the updraft. In light of the fact that warm, moist air cannot rise anymore, cloud droplets can’t form as well. The storm dies out with light rain. Cloud slowly vanishes in the process.

This entire process normally takes about an hour for a normal thunderstorm. However, the much larger and more powerful supercell thunderstorms can last for a couple of hours.

READ:  Do Mountains Have Roots?

There are three major types of thunderstorms; single cell, multicell, and supercell. Let’s have a detailed look at them.

As their name suggests, these storm form in clusters or lines and move together as one. They are more powerful compared to air mass storms. The strongest storms are normally located at the centre of a multicell cluster while developing cells are found toward the front. Dissipating cells are located toward the rear.

Square lines move in a pack as a line with a continuous gust from along the line. Nonetheless, Multicell storms produce severe weather similar to that of single cell severe thunderstorms. This is in light of the fact that each updraft is competing for warm, moist air. As such, updrafts are not normally able to gain enough power to generate very severe weather.

Supercell is certainly the most powerful and most dangerous type of thunderstorm. Supercell thunderstorms are composed of one giant, tremendously rotating updraft known as a mesocyclone. This kind of thunderstorm can last for several hours and they occur in extremely unstable strongly sheared environments.

The best conditions for a supercell storm to develop is when the winds are turning clockwise with height. These types of thunderstorm largely occur in the plains states. They are normally accompanied by severe weather conditions, which include:

Thunderstorms have wide-ranging effects on human life, including electrocution, shock, and even worse, deaths. They normally have a significant effect on the weather over an expansive area, with energy generated at the rate of at least 10,000,000 kilowatt-hours on an average.

They normally lead to local atmospheric instability, and just a single thunderstorm can produce lightning, catastrophic flooding, tornadoes, very strong winds, and hail. In fact, lightning is listed as one of the deadliest occurrences of a storm.

When a thunderstorm happens, animals would get hurt, buildings could be destroyed, and lighting may burn the vegetation, leaving animals with inadequate food. In light of the fact that thunderstorms are dramatic events, they can lead to psychological and emotional complications.

If you have a chronic illness, powerful emotions can sometimes result in the development of physical symptoms. They may aggravate an asthma attack, for instance, or make it more difficult to manage an arthritis flare.

It is also worth noting that thunderstorms have some positive effects. For instance, lightning creates the ozone layer from oxygen. It is the ozone layer that makes life possible on the earth’s surface. Otherwise, we couldn’t survive the sun’s ultraviolet radiation.

Moreover, lighting creates nitrate from nitrogen. Nitrate is a fertilizer essential for plants to grow and thrive on earth.

Thunderstorms are an amazing phenomenon, which are of three main types. They can occur virtually anywhere and are normally the beginning of some of other deadly storms such as tornadoes and hurricanes. About 16 million thunderstorms occur across the globe every year, with about 100,000 of them experienced in the U.S. alone. About 10 percent of the thunderstorms reach severe levels. It is also worth noting that at any given time, there are about 2,000 thunderstorms in progress.