The Great Plains, previously known as the Great American Dessert, is a massive piece of land stretching from Canada to Mexico across the midsection of the United States of America. The enormous expanse of grassland spans from mountain elevations of the Rocky Mountains to the Missouri River and from the Rio Grande to the forests of Canada covering 1800 miles extending from north to south and over 500 miles from east to west. 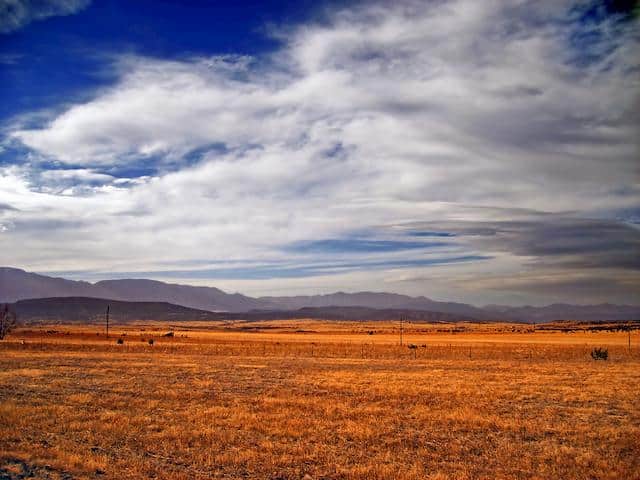 Continental climate prevails over the Great Plain with extremely cold winters and equally warm summers. The southern plain receives an annual rainfall of 15 to 25 inches while the northern plain has 12 to 15 inches of rain in a year. The region witnesses more rainfall in summer than in winter. During winter, there is a distinct phenomenon that takes place in the western Great Plains.

It is called chinook, a dry and warm wind that blows from the eastern slope of the Rocky Mountains and can raise the temperature by 17 to 22 °C for a short period. Moreover, the region is often subjected to an enormous thunderstorm or a ferocious blizzard.

Like anything, climate change is also affecting the Great Plains. It is increasing the intensity of the heat and cold in the region and raising the frequency of thunderstorms, drought, and flood-producing rainfall.

When there were fewer human encroachments in the Great Plains, the region was thronged by bison, black-footed ferrets, pronghorn antelope and grassland birds like greater sage grouse and mountain plover. However, there is a fall in their numbers now due to habitat disintegration, extraction of resources, and crop agriculture.

13 Interesting Facts About The Great Plains

The Great Plains is a major physiographic province of North America. The widespread of plain land is covered in prairie, steppe, and grassland. The vast mass of land constitutes one-seventh of the United States of America.

The Plains are predominantly covered by grasses. The east has tallgrass, and medium grass prairie while the west has shortgrass and bunchgrass steppes. There are forbs and larger plants like the yucca and the prickly pear cactus in bordering areas and shrubs and some small trees such as the mesquite and the sagebrush.

The Great Plains were inhabited by the Native Indians for thousands of years. Spanish explorers arrived in 1540 led by Francisco Vasquez de Coronado. After hundred and fifty years, French considered trading opportunities with the tribes of the Plains in the region. In 1803 Americans bought this region from France in 1803, which is known as the Louisiana Purchase.

Within twenty years of the purchase, three government expeditions took place to understand and gather information about the region. During this period the area was named the Great American Desert. After that many military actions took place which displaced the native Indians and established American settlements.

Fact 4: People of the Region

Majority of the population of the region lives in small and medium-sized urban areas. Edmonton, Alberta and Denver, Colo are a few prominent cities of the Plains. The population in the 12 states covered under this region has grown between 1990 and 2000, but when analyzed county-wise, there seemed to have a decline in the population in around half of these states during the same period. The population in 1990 was 7.6 million, which rose to 9.9 million in 2007.

Agriculture is the primary economic activity in the region. The vast land is fertile and is best suited for the cultivation of wheat. The northern plains are used for largescale mechanized farming of the crop. The winter wheat is produced mostly in areas centering Kansas while spring wheat dominates the region around Dakotas.

Other significant crops are sorghum, barley, and rye. The mild climate condition and improved irrigation facilities of the southern plains allow cultivation of cotton, onions, spinach, and peanuts. Besides, cattle ranching is another important economic activity in the region.

The Great Plains is mineral and oil-rich, which makes it a center for mineral production. In Texas and parts of Oklahoma and Kansas, oil and natural gas are produced. In Wyoming, Montana, and the Dakotas, coal is abundant. The vast open-pit mines of this region produce coal that has low sulfur content. It is a cleaner-burning variety much preferred for electricity generation.

The Great Plains has some large cities with a huge population. They are Edmonton and Calgary in Alberta and Denver in Colorado. Smaller cities include Saskatoon and Regina in Saskatchewan, Amarillo, Lubbock, and Odessa in Texas, and Oklahoma City in Oklahoma.

The usually vast land covered with tall grasses and the clear blue sky makes for a treat to the eyes. The sight of herds of American Bisons roaming around the land is a pleasure to watch.

READ:  What is a Rock and What are 3 Basic Types of Rocks

Great Plains were inhabited by different clans of Native Indians. The major tribes among them are:

The culture of the region has transformed due to the invasion of European explorers. Previously, it was the homeland of the Native Indians who followed a nomadic culture which essentially centered around bison. They were mounted hunters. After the Europeans settled in the region, the lifeways of the Plains underwent a radical change. The nomadic life got replaced by agrarian life.

The languages spoken were different for different tribes. These included languages from the Algonquian, Siouan, Caddoan, Ute-Aztecan, Athabaskan, and Kiowa-Tanoan. They also used Plains Indian Sign Language (PISL) which was utilized by the Indians to communicate across different tribes with different languages. It was estimated that in 1885 there were more than 110,000 “sign-talking Indians” which started falling with time and now there are very few PISL signers alive.

The Great Plains of America is a place that has witnessed the changing face of the USA over the years. It was a geographical marvel with an abundance of natural beauty, plant and animals, and natural resources. As a homeland of the Native American tribes, it could retain its originality. But with the intervention of western civilization, it began losing its beauty and resourcefulness.

Overexploitation of natural resources and indiscriminate hunting of animals have destroyed the region’s balance. In recent years, however, efforts from international organizations like Worldwide Fund for Nature (WWF) have initiated restoration of the damages to the natural habitats. It also undertook programs to stop the natural landscape from losing all its glory.