Concrete is the most widely used material in building. It’s the second-most-used substance in the world after water, and by 2025, the concrete industry is expected to exceed $600 billion in revenue.

In this article, we are going to look at concrete’s interaction with water. We will begin by discussing the chemical composition of concrete, talk about how this composition shapes its properties, and then look at the possible consequences of water interacting with concrete.

Does Concrete or Cement Absorb Water?

Yes, concrete does absorb water. The reason behind this is that concrete is a highly porous material that is made up of gravel, sand, cement and water. The final product appears hard but is full of pores. The pores run deep into the concrete and absorb water from the rainwater and even from the air during high humidity.

The words “concrete” and “cement” are often used interchangeably, but they are distinct. Cement is an ingredient in concrete. Concrete is made up of two key components: aggregates and pastes.

Aggregates such as sand, gravel, and crushed stone provide strength to the overall composite material (concrete, in our case). Pastes such as cement are binding agents that are used to stick building materials together.

Cement is a highly porous material that can absorb water from precipitation or even the surrounding humidity. It is almost like a sponge, which absorbs water and changes its shape accordingly. Concrete also absorbs water due to its chemical composition, which we will discuss below.

Why Does Concrete Absorb Water?

Concrete is formed by mixing the aggregate and the paste with water; water activates the cement, which then binds everything into a composite material—concrete.

This finished product may look hard and smooth to us but it contains a large number of pores. Some of these pores run deep into the concrete, while others are mostly on the surface. When water falls on concrete, it seeps into these pours, and that is why concrete absorbs water.

We can look at this in more detail by learning about the formation of concrete. As mentioned above, concrete is formed when aggregates and paste mix together with water. This mixture is poured in its semi-solid state, and it takes about a month to harden and become strong. This month-long period of concrete hardening is known as curing.

READ:  13 Excellent Examples of Natural Resources That Exist on Earth

During the curing period, keeping the concrete hydrated helps the chemical reactions take place within it, which allows the composite to harden. Often fresh water is lightly sprayed with water for this reason. It allows the concrete to cure slowly and gain strength.

But the formation of concrete inevitably leads to its water-absorbing properties. After concrete dries, the water that was used to mix it slowly evaporates. As it leaves the mixture, it leaves behind tiny pockets and tunnels in the concrete. It is these little spaces which cause concrete to absorb water.

Yes, cement absorbs water. You might have seen cement in its dry powder form, which consists of carefully mixed ingredients like calcium, aluminium, iron, and silicon. This powder is mixed with water in a measured proportion to form a cement paste.

When the cement powder and water mix, they react together and form a compound known as calcium silicate hydrate (CSH), often simply called cement hydrates. During cement hydration, these tiny hydrate nanograins combine and form a network that glues the constituents together.

This is how cement gains its strength. But the spaces between the cement hydrates create a large network of pores in the cement paste. These pores are what allow the cement to absorb water. These pores “are so small, you don’t even need rain to fill them with water. Even ambient humidity can fill these pores.”, as Tingtao Zhou, a PhD student at MIT explains.

Yes, even after the curing period, when the concrete has hardened, it continues to absorb water. As we discussed, this is because after the water—used to mix aggregates and pastes that make up the composite—evaporates, it leaves behind pores in the concrete. This network of pores is what makes concrete absorb water.

It’s important to understand that the proportion of water used while mixing the concrete is very important, as it impacts the strength of the composite material.

If you use a lot of water and a small amount of aggregate, then this is going to reduce the compressive strength of durability of the concrete. Moreover, the excess water will create more spaces between the aggregates.

When the concrete dries out, this water will evaporate, leaving behind a large network of pores. This will lead to weaker concrete, which will have a large capacity for water absorption.

What Happens When You Put Excess Water on Concrete?

The right amount of water is essential to the formation of concrete. But excess water can be quite harmful to it. First, as mentioned earlier, during the mixing stage, too much water can lead to weaker concrete and poor water tightness (the ability of a material to be impervious to water).

Moreover, moist concrete can also become the breeding ground for bacteria and mold. Concrete does not have any organic material of its own, but its pores can trap dust, microorganisms, and salts, which can attract bacteria & mold.  When mold feeds on these, it secretes acids which can damage the concrete. Mold growth can also lead to other health concerns for humans.

Because of these reasons, it’s important to mix concrete with the right amount of water during the initial installation. Later, one must also ensure that excess water is not getting collected over concrete.

Yes. Concrete can absorb heat from direct sunlight. You might have noticed this if you have walked barefoot on a concrete surface. It absorbs and stores the heat, releasing it slowly. This ability is called “thermal mass”.

When installed properly, a concrete floor can soak up sunlight during a wintry day and release it slowly at night—a phenomenon called “solar gain”. This is how concrete can allow you to create a wonderful passive heating setup.

But while this may be pleasant in its gentler form, it can cause a lot of harm in excess. During summers, the heat absorbing property of concrete—which is used pretty much everywhere from concrete streets to roofs—magnifies the already rising temperatures. This phenomenon is known as urban heat island: the metropolitan area becomes significantly warmer than the surrounding rural areas.

This is not only unpleasant but can also be lethal: heat kills more Americans than hurricanes, floods, and earthquakes combined. Moreover, the urban heat effect is only getting worse as more and more people are migrating to cities.

How Much Water Does Concrete Absorb?

This depends on the kind of concrete being used. Certain manufacturers specifically design concrete to absorb surface water. They do this by using large crushed granite (instead of sand and small stones) as aggregate, and this leads to lots of pores in the composite, which ultimately absorb more water.

LaFarge Tarmac manufactured an absorbent and permeable concrete surface called “Topmix Permeable”, which can absorb 880 gallons of water in one minute. The company is hoping that it will help to prevent flash floods. In hot weather, this concrete is also much cooler than regular asphalt.

So, the ability of concrete to absorb water depends upon the kind of concrete you are using and its composition. However, as discussed earlier, unless you have something magical like the “thirsty concrete” of LaFarge Tarmac, you should keep your concrete surfaces safe from excess water.

How Long Does Concrete Last?

Concrete can last up to 100 years in large-scale projects like buildings, as long as it’s properly looked after. Sidewalks and driveways usually last up to 50 years since they experience more wear and tear.

Concrete deterioration can have various causes. Aggregate expansion occurs when the aggregates in the composite undergo chemical reactions and expand, leading to cracks in the concrete. Another reason can be the corrosion of reinforcement bars (steel bars that provide additional support to the concrete structure). Iron oxides can form in these bars, which can expand and disrupt the concrete structure.

Can Concrete be Reused and Recycled?

Yes, concrete can be reused and recycled. This reduces construction costs and is also beneficial to the environment. The process usually involves crushing the concrete rubble into powder using industrial equipment like jaws and large impactors.

After it is broken up, the concrete goes through a secondary impactor and then is separated into small and large aggregate. Additional processes like water flotation may also be required to separate certain elements from the crushed concrete. Now, the concrete is back in its original powder form.

No, concrete is an inflammable material and cannot burn on its own. But this does not mean that is completely fireproof. Concrete does not burn but it does get very hot. Moreover, high temperatures damage the structural properties of the composition.

Instead of burning, the concrete material can break down, become brittle, and even return to powder-like form. But it doesn’t catch fire like wood. This is why houses built from concrete are much safer in terms of their resistance to fire.

In this article, we have looked at how water and concrete interact together. We began by looking at cement, which is an important ingredient of concrete. Then we discussed how after the formation of concrete, there are pores in its structure that allow it to absorb water.

But excess water is often harmful and can issues like cracking, dusting, and bacteria growth. Finally, we looked at the recycling of concrete and how it is resistant to fire. 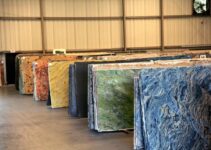