The Thar Desert can be found in the northwestern region of India. It is the only desert India has and forms a natural boundary between India and Pakistan. The area is also known as the Great Indian Desert. 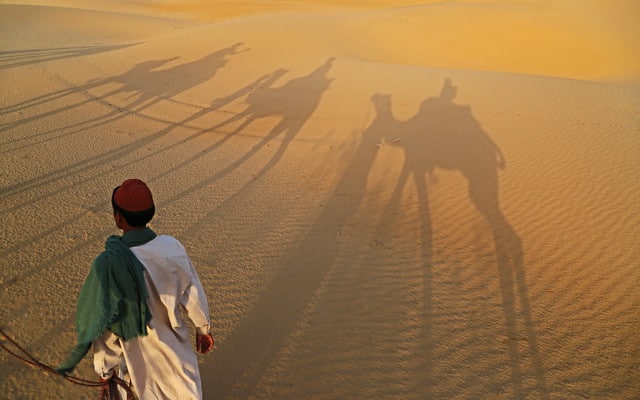 In India, the desert extends from Gujarat in the west to Punjab and Haryana in the north and northeast, the Aravalli range in the southeast and the Rann of Kutch in the south. However, a significant part of this desert lies in Rajasthan. The desert covers an area of 200,000 square km.

The Thar Desert gets most of its rainfall in December and January. In June, July, and August, this desert has no rain. As a result, it remains almost dry. But, in present times, due to changes in environmental conditions, some parts of Rajasthan are vulnerable to floods during monsoon. The hottest seasons are June and July while the coldest seasons include January and December.

The arid land and the hot climate of the Thar desert are only suitable for perennial and ephemeral plants. The perennial plants have developed unique features known as xerophytic adaptations that help them survive in the meager water conditions. These plants are stunted, thorny, or prickly shrubs.

They include khejri, keekar, cactus, and babool. The desert also has oases. The soil around an oasis is fertile, and date palms and other plants keep growing around it. During the short rainy season, some ephemerals like Bekario or Heartleaf indigo sprout forth. They grow, bloom, and bear fruits within that short span and then lie dormant till the next rainy season.

READ:  20+ Thrilling Facts About the Awe-inspiring Beauty of the Victoria Falls

A wide variety of birds and animals can be found in the Thar desert. Rajasthan has several national parks which are home to animals including nilgai, camel, blackbuck, Indian wild ass, and chinkara. Besides, there are Indian spiny-tailed lizards, saw-scaled vipers, Asiatic wildcats, and white-footed fox. Among birds, one can see Great Indian Bustard and Great Indian Spotted Eagles apart from peacocks, bulbul, and vultures.

The name “Thar” is derived from the word “thul” meaning sand ridges.

The land of the Thar desert is covered with sands made of Archean gneiss metamorphic rocks, Protozoic sedimentary rocks, and alluvium material. The Thar Desert is covered with shifting sand dunes. These are small hills formed by the wind blowing over the sand in the desert. These sands have been accumulated over 1.8 million years.

One million years ago, the river Sarasvati used to flow through this region to the Indian Ocean. It was a region with good vegetation and high rainfall. A half a million year ago, due to powerful tectonic movements, the river system got distorted, and the streams lost its flow and meandered. With climatic changes, rainfall started declining and chocked the river. Ultimately, the river dried forever.

As strong winds started lifting sand and build-up particles from alluvial sediments and deposited them in the region, the actual formation of the desert began. Aridity gradually led to the loss of humidity. Then the dunes stabilized, soil formed, and vegetation took now shape. The region thus slowly turned it into a desert.

Fact 4: Position in the World

The Thar desert is the seventeenth-largest desert and the ninth-largest subtropical desert in the world.

Animal husbandry and agriculture are the mainstay of the economy centered around the desert. There are five major breeds of cattle of which Tharparkar breed yields the highest quantity of milk, and the Kanker breed is suitable both as a beast of burden and as a milk producer.

Sheep are bred for rough and medium-fine wool while camels are used both for transportation and plowing the land for agriculture. Kharif crops are the chief source of agricultural production with bajra being the main crop. The other crops include corn, jowar, groundnuts, sesame, etc.

The Thar Desert has become the biggest wool-producing area in India, with almost 40-50% of India’s total wool production coming from this region.

Water is a scarce resource in the Thar. Whenever it rains, water is collected in tanks and reservoirs and is used for drinking and other domestic purposes. The groundwater being saline cannot be utilized. However, sound acquirers have been detected in the central part of the desert.

For irrigation, canals are the primary source of water in the desert. The Indira Gandhi canal provides water for irrigation to the vast area of the Thar. The canal begins at the Harike Barrage, at the meeting point of the Sutlej and Beas rivers in Punjab, and continues in a southwestern direction for around 470 km.

Apart from coal-based thermal power, generation of electricity from wind power is also carried out in the Thar desert. With a vast expanse of arid land, it is considered to be an ideal place for the same.

READ:  What is a Land Breeze and Sea Breeze? Occurrence, Causes and Effects

The Thar Desert attracts many tourists. Places like Jaipur and Udaipur are well known for their forts. Sariska, Ranthambore, and Keoladeo are some of the famous national parks in Rajasthan. The desert cities of Jodhpur, Bikaner, and Jaisalmer are a must-visit for tourists.

In February every year, a Desert Festival is conducted in the city of Jaisalmer. It showcases the rich heritage of Rajasthan and its culture. There are traditional song and dance performed by the local nomad groups. One can witness rare competitions like camel polo and cheer for camel races.

On 18 May 1974, India carried out its first nuclear explosion test in the Thar desert. In 1998, again it did two more explosions in a place called Pokhran located in Thar desert.

The Thar desert is one of the most precious natural treasures of India. It adds to the uniqueness of the country and is home to several distinct vegetation and vibrant wildlife. Like any other natural features, it also needs protection and conservation from excessive human intervention and exploitation.