Large CO2 Emissions From the Batteries of Electric Cars

If you’re looking to get your hand on an electric car to not only have a sweet ride but one that is contributing towards a safer environment – we urge you to think again. While several reasons back the potential growth of electric vehicles (EV), the most compelling reason to get your hands on this innovation still continues to remain its potential to reduce the emission of greenhouse gases into our environment.

The car manufacturing industry is resting all their bets in ensuring that electric vehicles become an ultimate innovation that we’ve all been waiting for. However, let us remind you that electric cars aren’t as green as you think. 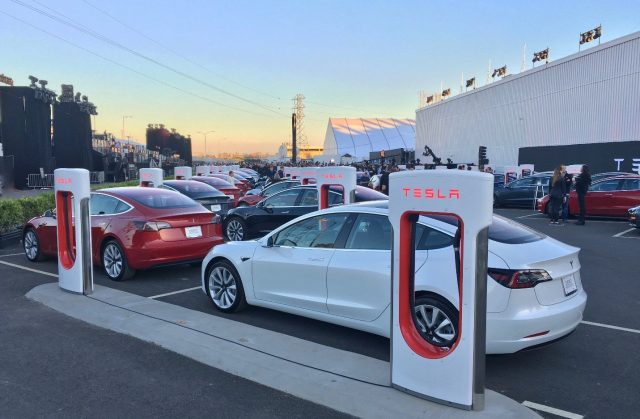 Although a lot of efforts ride on this latest invention, we must argue that the car manufacturing industry is a long way from coming up with a design that not only supports our needs of transportation but also supports the causes that we stand for.

Electric cars are believed to be an innovation that’s much safer to our environment than regular fuel powered vehicles. However, much to our surprise, the batteries contained in these “cars of the future” emit large sums of carbon dioxide and contribute to environmental pollution.

You need to seriously consider where you are based

While an electric car may not require gas, the chances are that it still might need energy produced by burning carbon. Depending on how your local grid is generating electricity, your electric car could be just as harmful to your environment as would any other vehicle.

READ:  The Most Carbon Efficient Ways to Travel

According to Virginia McConnell, all electric cars cannot be deemed safe for the environment if they emit the same amount of carbon dioxide and other toxic gases as traditional vehicles. McConnell is serving as an economist at the environmental research firm Resources for the Future. She says “If you use coal-fired power plants to produce the electricity, then all-electrics don’t even look that much better than a traditional vehicle in terms of greenhouse gases.”

Let’s consider few important details to get a greater understanding of how your electric car may or might not be harmful to our environment.

If you are based in California – the largest producer of electricity through clean means, your electric car would be a better choice than a hybrid. On the other hand, if you are based in Midwest or Southern regions of the United States where carbon based fuels are used to produce electricity, your electric car would be promoting a higher level of CARBON DIOXIDE in our environment than would say a hybrid car. This information applies to the rest of the world, just as much as it applies to the United States.

If this wasn’t enough for you to seriously rethink before diving into purchasing your very own electric vehicle, here’s one more important piece of information that you need to consider:

Although, name brands such as Tesla are actively advertising the release of their electric vehicles by deeming them as having zero emissions, however, it is important for you to understand that while the car itself may not be emitting harmful greenhouse gases, but the power plants that produce these cars probably do.

Research conducted by The Swedish Environment Institute on behalf of the Swedish Transport Administration and the Swedish Energy Agency looked into the impact of lithium-ion batteries on our environment from a life-cycle perspective.

Mats-Ola Larsson, a faculty at the IVL, expressed, “It’s great for companies and government to embark on ambitious environmental policies and to buy climate-smart cars. But these results show that one should not think of choosing an electric car with a larger battery than necessary.”

The study also highlighted that while about half of the total carbon dioxide emissions result from the time of production of raw materials for the batteries, the rest is produced inside the factory. The report indicated that batteries used in manufacturing these electric cars contribute to a higher rate of carbon dioxide in the air. It highlighted that for every kilowatt-hour of storage capacity in the battery, emissions as high as 150 to 200 kilograms of carbon dioxide are generated in the factory.

While the study did not focus on any particular car manufacturing brand, it did, however, consider how the batteries are produced and the kind of electric power that they made use of.

The United States Department of Energy indicates that an electric vehicle might contribute towards an increase in greenhouse gases.

Furthermore, research shows that electric cars charged by utilities during a particular time of the day may give out a higher level of CO2 emission than it would at a different time. It was indicated that in some parts of Pennsylvania, Ohio & Virginia, electric cars when charged using local electricity at night produced a higher rate of air pollution than it did when charging during the day.

Jack Barkenbus in his article “Electric Vehicles: Climate Saviors, Or Not?” states “the widespread introduction of EVs, by itself, is insufficient to lead to reduced carbon emissions from the transport sector. Electricity grids need to incorporate greater levels of clean, renewable energy. Equally important, and less understood, electricity providers must incentivize public recharging of EVs when renewable energy generation is at its peak.”

While electric vehicles that make use of clean ‘electricity’ are safer for our environment with a much lower rate of CO2 emission than those being charged by electricity produced through other means such as coal-fired plants, the batteries present in these electric vehicles emit a very high amount of CO2. This takes away an electric car hard earned credibility for being much more dedicated to protecting our environment.

Rachael Everly is a passionate blogger and an avid luxury car lover currently associated with Alfa Romeo Central Florida, dealers of luxury cars in Orlando Central Florida. For more updates follow her on twitter and Facebook.