Angelfish is an excellent choice for most home aquarists due to its fascinating appearance, graceful movements, and consistent supply of new varieties. There are primarily two types of angelfish. Freshwater angelfish, tropical cichlids of the genus Pterophyllum belong to the Cichlidae family, and the marine or salt water angelfish belong to the Pomacanthidae family.

Angelfishes are native to the South American tropical freshwaters. They are carnivorous, though some say omnivorous, and they take care of eggs and young. Angelfish is beautiful to behold and also a joy to cultivate.

Can You Put Angelfish in a Pond?

Yes, Angelfish can be put in a pond. This is because they grow relatively large, achieving heights of between fifteen and nineteen inches, requiring lots of space, about ten and a half gallons per fish. Therefore, a pond can be really spacious for them.

If angels are kept in summer ponds, put them in the pond in the middle of May and take them out the early first week of September. It’s better to bring them into the house aquarium during the winter. They will school and grow fast as long as temps stay over 60. If your pond stays at a constant 78-82 degrees, you can keep angelfish. They seem to do well.

Captive-bred angelfish are fairly hardy. They can easily thrive in a pond if water quality is good. However, the pH levels of the pond must remain constant; otherwise, the fish may become ill. In addition, males can be territorial, mainly when females are present.

However, some think that if angels are put in a pond, their natural beauty becomes less visible above the water’s surface.

Can a Fish From a Tank Live in a Pond?

Yes, you can keep aquarium fish in a pond if you provide them with the right environment and water parameters. Most aquarium fish are tropical fish that require warmer temperatures. Therefore, if you live in an area where a pond maintains tropical temperatures throughout the year, you can easily keep tropical aquarium fish outside the entire year.

Of course, this differs per fish species. However, if the temperature drops too low in the autumn and winter, you should move them inside as soon as it gets too cold for them.

The correct tropical temperatures mean that the temperature stays above 65 °F (18 °C) at night and above 72 °F (22 °C) during the day. Anything below that is too cold for tropical aquarium fish, which weakens their immune system and makes them prone to diseases.

The pond should be partially dug underground to make sure the temperature is more or less stable and does not fluctuate wildly in the pond. Therefore, your pond must have some deeper areas. This makes certain heating and cooling down water gradually. If the pond is shallow, there is little water to heat up, and temperatures can rise well above 86 °F / 30 °C. This is lethal to your fish!

There should also be proper filtration and water circulation in your pond. Some ponds do well with just a lot of live plants to filter the water; you need to make sure the water is adequately aerated and moving by adding something like a fountain, waterfall, filter, skimmer, air pump or circulation pump to your pond.

Can Angelfish Live With Goldfish?

Goldfish and angelfish are usually not kept together as they come from fundamentally different regions with rather drastic differences in water parameters.

However, below are some ways to keep them together, provided certain conditions are met.

Goldfish are, by nature, coldwater fish, and they thrive in lower temperatures (68° F to 74° F). However, at the same time, Goldfish are also very hardy fish that survive in temperatures much higher if appropriately acclimated.

On the other hand, Angelfish are warm-water fish from the Amazon, where the temperatures are generally much higher. A non-fancy goldfish can survive in the tropics at temperatures close to 80° F. The temperatures around 78° F – 80° F suit angelfish. Hence, both fish species should survive together if one can maintain a temperature of around 75° F.

As a thumb rule, Angelfish should always be kept in small groups of about 5-8 individuals to restrain aggression. On the other hand, Goldfish usually do not pose as much threat. But they become overzealous at times, especially during feeding time, which can cause specific stress in angelfish.

The common Goldfish grow 12 inches or more, and the Angelfish up to 10 inches in length. As both species of fishes grow to quite a large size, keeping them in adequately sized tanks will ensure that angelfish’s aggression is kept to a minimum as it will reduce stress.

Therefore, if you intend to keep them together, start with a tank size of no smaller than 30 gallons. Also, take note that angelfishes have a relatively broad body, and the height of the tank should accommodate at least 2-3 times its body width. Therefore, keeping Goldfish with Angelfish in a too-small tank could be a disaster.

Certain environmental factors can cause oxygen levels to drop drastically in the oceans and lakes. Therefore, it is even easier for oxygen levels to deteriorate in a fish tank. This is why diffusers are so essential.

Moreover, environmental factors like wave movements consistently dissolve oxygen into the water in their natural habitat. Since aquariums lack such turbulence, angelfish need filters and diffusers to introduce oxygen into the tank.

Oxygen enters via the surface. The device causes agitation in the water. The turbulence generated on the surface creates the bubbles’ upward motion, allowing oxygen to enter the tank and carbon dioxide to escape. Like all fish, angelfish require aeration. Diffusers ensure that oxygen is adequately disseminated throughout the entire tank.

You need to keep them handy to ensure that the oxygen levels in the tank are consistent with maintaining the angelfish healthy and happy.

Can Angelfish Live in a Bowl?

Angelfish can be 6-8 inches long and 8-12 inches tall in captivity. Therefore, an Angelfish cannot live in a bowl. Usually, Angelfish grow quite large in an ideal environment and, when fully grown, will require an aquarium of 55 gallons or even larger.

Considering their body shape, tall aquariums are best for accommodating Angelfish. Angelfish also need space not only because of the size of the fish themselves but also because they are pretty active fish and love swimming and roaming around exploring something they can’t do in a bowl! Thus bigger the tank is, the better the arrangement.

READ:  Do Ponds Need to be Fenced? (Need Waterfall?)

Can Angelfish Live in Freshwater?

Be it a pond, tank or aquarium at home, caring for them is pretty easy once you set up the appropriate environment. Angelfish can live up to 10 years in captivity if provided with proper conditions.

First, you need to make sure the tank size is appropriate, and this species prefers tall aquariums having a capacity of at least 20 gallons. Then it requires the proper temperature and pH level. Next, you must feed your angelfish a healthy diet and clean the tank regularly. Finally, use caution when introducing other fish to the tank. Watch out for problems, and don’t forget to quarantine any angelfish that show signs of disease.

Do Angelfish Attack Other Fish?

Angelfish are primarily peace-loving and will do well in any community aquarium. However, they get aggressive at times and bite each other quite often, and this disposition isn’t just limited to their own species. They are notorious for their fin-nipping trait; they nip from time to time.

Angelfish also bite other fish – tiny ones. Angelfish eat smaller fish that can fit into their mouths, for example, neon tetras. Still, it’s doubtful that an angelfish will kill a goldfish. However, if the size of your Goldfish is of a similar size, it would be best to remove the Goldfish.

Fish that eat snails are one of the best ways to get rid of snails in your aquarium. There are smaller cichlids like German Blue Rams, Kribensis and even Angelfish that sometimes eat snails. Angelfish are also known to harass giant-size snails, But, of course, bigger cichlids can also eat snails. However, it’s impossible to add any larger cichlid to a (community) tank without proper precautions.

Nevertheless, sometimes the snails could be a lovely addition to your freshwater aquarium under the right circumstances as angelfish tank mates. But, make sure those are not pest snails like pond snails or ramshorn snails.

A female angelfish lay eggs between 100 and 1,000 in one breeding cycle. Therefore, a pair of angelfish can spawn every two weeks, especially when removed from previously laid eggs.

It takes about 60 hours for fertilized angelfish eggs to go from the spawning stage to hatching. 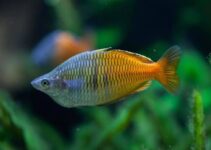