Rainbow fishes are a family of very colorful freshwater fish known as Melanotaeniidae. There are well over 50 species of rainbowfish worldwide. Rainbow fishes can span from as little as 12 cm (4.7 inches) in length to over 20 cm (7.9 inches) depending on their species. They inhabit a long list of freshwater habitats, which include; rivers, swamps, and lakes.

Rainbow fishes are known to spawn throughout the year and lay large numbers of eggs at the start of the rainy season. These eggs attach to nearby aquatic vegetation to hatch over a 7 to 18 period. They are native inhabitants of the various freshwaters of the Raja Ampat Islands within Indonesia, eastern Australia, Cenderawasih Bay islands, New Guinea, and northern Australia.

Rainbow fishes are omnivorous and their diet consists of foods of all sorts, including; algae, larvae, insects, and crustaceans. They are very popular fishes in aquariums due to their unique colors and are most at times kept as pets.

Rainbow fishes are believed to have the same evolutionary line as the marine silverside species. They also favor a blackish marine environment filled with living food sources. Every Rainbowfish species has two narrowly separated dorsal fins and does not possess a lateral line.

Rainbow fishes move in schools, enjoy a plant-filled habitat with live foods, and are very instrumental in keeping the mosquito population in check within their native habitats.

There are several types of rainbowfish in the world, some of which included; 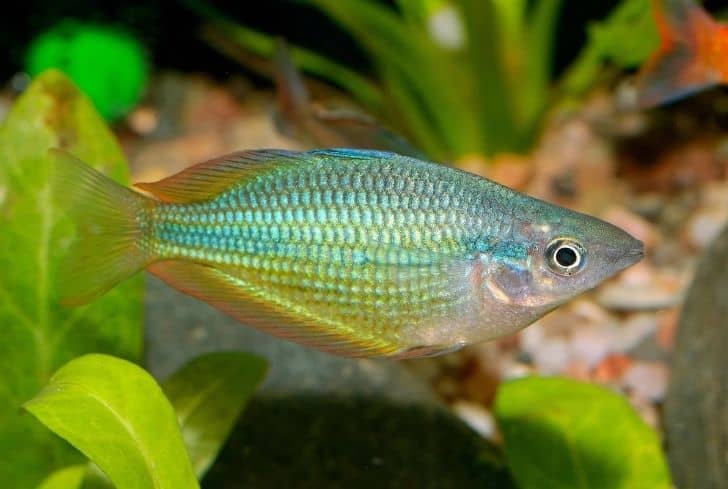 The Australian rainbowfish can be cared for with great ease and may span up to 4 inches in length. They have silver and yellow colors and are native to Australia. The Australian rainbow fish is also called a Murray River rainbowfish. They move in schools and prefer heavily plant environments, dense enough to allow them to swim around freely.

If you desire to keep an Australian rainbowfish in an aquarium, you’ll need one that’s at least 4 feet in length, as they really love to swim in plenty of water. They are usually sold young, between 1 and 2 inches in size. 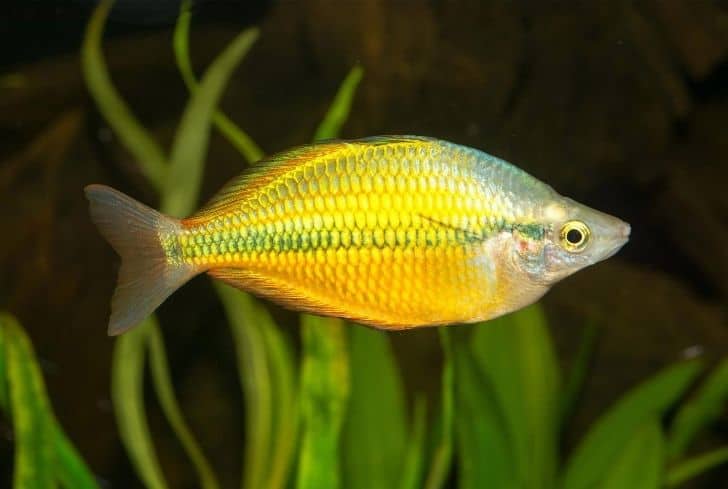 Axelrodi rainbowfish (Chilatherina axelrodi) have a blue color and can grow as long as 4 inches (10 cm). Just like the Murray River rainbowfish, they are also easy to care for and have great temperaments.  They prefer live food diet and the males are more brightly colored than females.

The Axelrodi rainbow fish is a great fish to start with If you wish to add a diversity of beautiful colors to your aquarium. You should, however, use dark-colored gravel to intensify the natural color of the fish.

Australian rainbowfishes are very popular because of their beautiful colors, very Peaceful nature, and most suitable for community tanks (aquariums). New species of this fish are very often discovered and sold to aquariums for display. 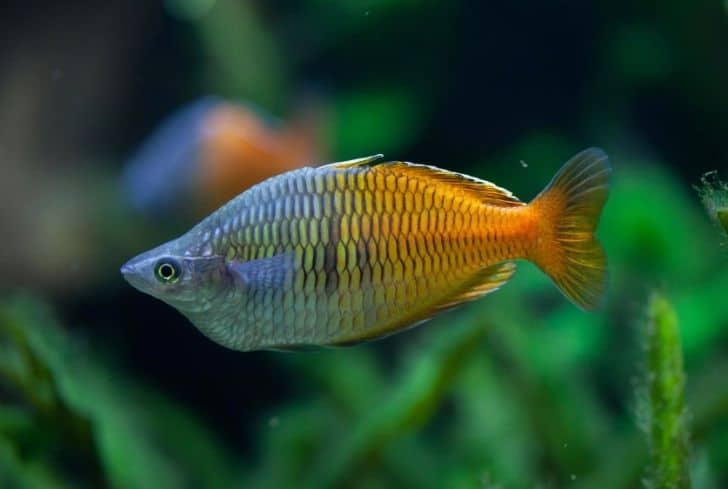 The Boesemani rainbowfish (Melanotaenia boesemani) has a narrow throat and a largemouth. It can grow to about 1 to 2 inches in its youth and up to 4 inches (10 cm) as an adult. They are blue or orange in colors, have an omnivore’s diet and enjoy live foods.

The male’s Boesemani rainbow fish have a bluish-purple head and an orange-yellow body, while the females are not as colorful. They however have a lifespan of about 5 years.

The Boesemani rainbow fish has a very peaceful nature and are also quite suitable for community tanks. They need a lot of room to swim and so require a fairly large tank, at least 4 feet long, and is also able to hold at least 20 gallons of water. They prefer a live food diet and are native to Thailand and New Guinea.

The Boesemani rainbow fish Breeds by laying eggs and thrive in water within the temperature range of 81 and 86 °F (27-30 Celsius). 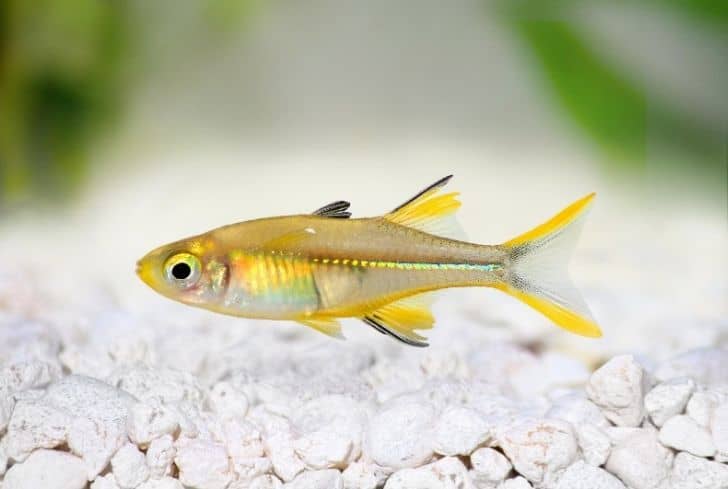 The Celebes rainbow fish is native to Indonesia, they have peaceful temperaments and are easily cared for. They usually grow to a length of about 3 inches and need plenty of room to swim in. As a result, one would need a tank with a volume that can hold not less than 20 gallons of water.

The Celebes rainbow fish have a blackish color and its colors intensify under natural lighting. It is important to keep the water temperature steady, as this fish is very sensitive to environmental changes. A Celebes rainbow fish’s diet includes; live foods, flakes, and algae. 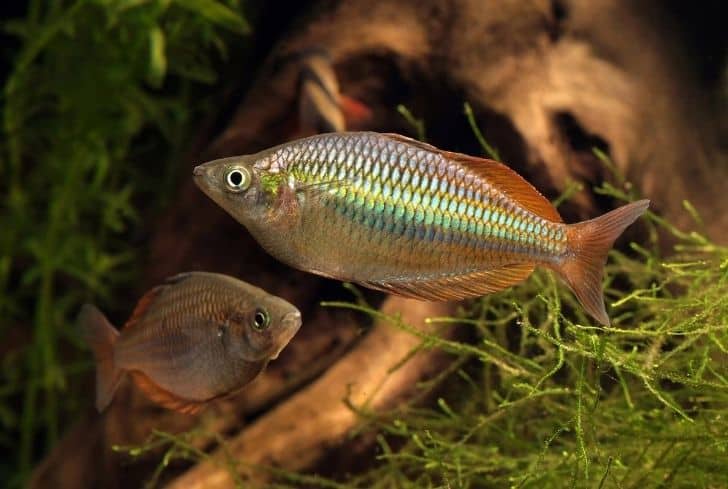 Eastern rainbowfishes usually have a silver or yellow color, and measure up to 4 inches in length. They are easy-going and very easy to care for. The Eastern rainbow fish is also known as the Splendid rainbow fish. 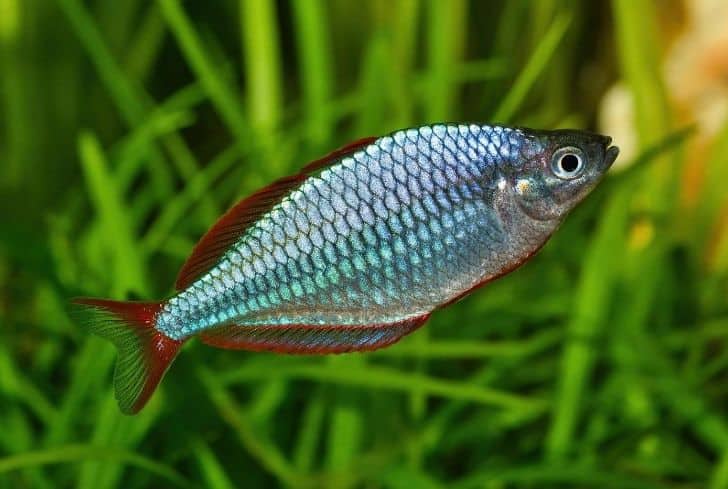 The Praecox rainbowfish (Melanotaenia praecox) is also known as the Dwarf Neon rainbow fish. They have two dorsal fins and a pair of unusually large eyes. They have an omnivore nature, and can only feed on small pieces of food because of the size of their mouths. Praecox rainbowfishes are egg layers and thrive in waters of around 75-82 °F (22-28 Celsius) temperatures. Their eggs hatch in under a week.

Praecox rainbowfishes grow to about 2.5 to 3 inches (6 cm) in size, are peaceful in nature, and fairly easy to care for. These fishes have a lifespan of over 3-4 years and are native to Malaysia and New Guinea. Praecox rainbowfishes require a minimum tank size of 10 gallons. 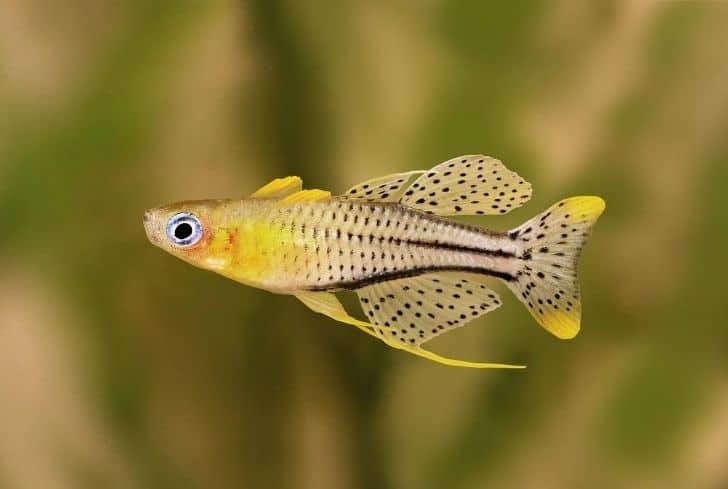 The Pseudomugil rainbow fish is quite different from other types of rainbow fish, and are difficult to take care of. They have an aggressive nature and come in all sorts of colors. They can grow up to 2 inches in length, are very attractive and are also fun to have around. They are native to New Guinea and Australia.

The Pseudomugil rainbowfishes move in schools. The males of this species are bigger in size and have larger dorsal fins than the females. They have an omnivore’s diet, and require tanks capable of holding at least 20 gallons of water. 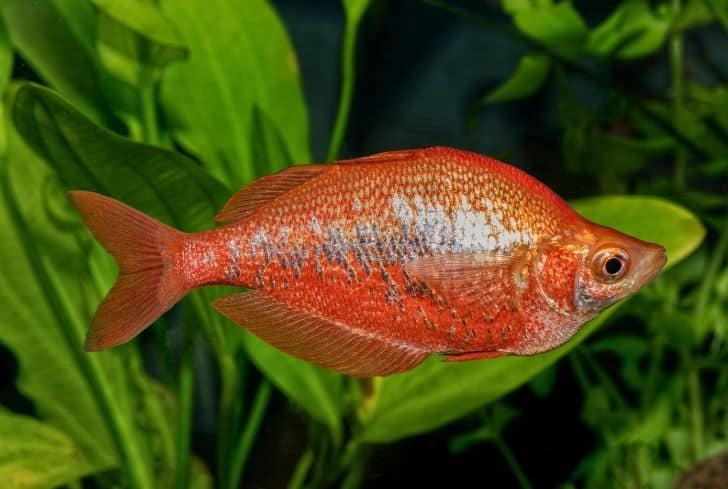 The Red Irian rainbowfish (Glossolepis incisus) has a beautiful red color and a good disposition. They are fairly easy to take care of, can grow from 4 to 6 inches (15 cm) in length, and have a lifespan of over 5 years. The Red Irian rainbow fish is native to Australia and New Guinea. The males of this rainbow fish species have bright colors while the females have a silvery color. 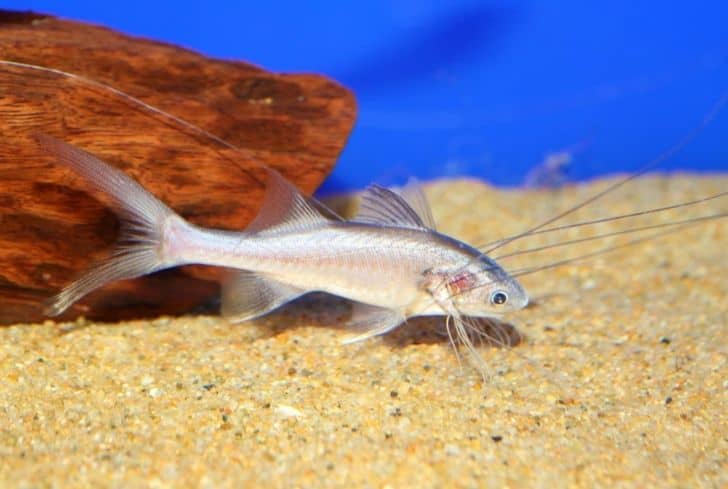 The Threadfin rainbow fish have a very peaceful nature, and however, require a moderate amount of care. They tend to grow roughly up to 2 inches in length and are native to Asia and Australia. The threadfin rainbowfishes are long and narrow and prefer small-sized diets of prepared food as well as live foods. 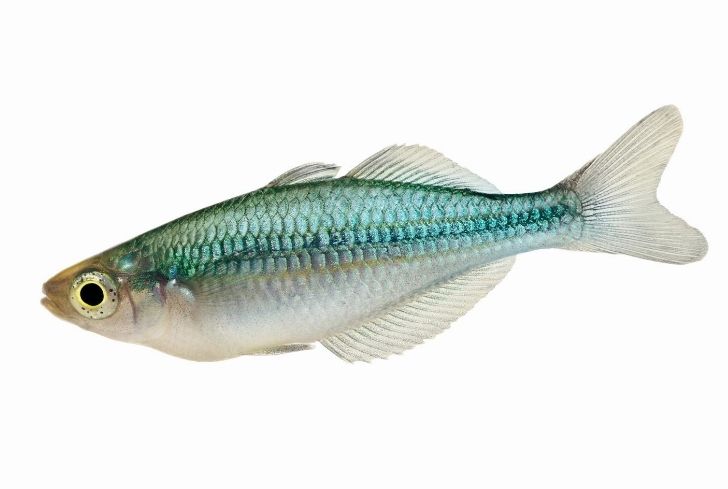 The Turquoise rainbow fish is a type of rainbow fish with teal-blue coloration and can grow from 1 to 4 inches in length. They have a cool disposition and are very easy to care for. They are egg layers that spawn in low to moderate lighting and have a diet of small-sized foods like; frozen foods, live foods, and flakes.

The Turquoise rainbow fish requires a tank that can hold at least 50 gallons of water as they love aquariums with plenty of plants and a lot of room to swim. 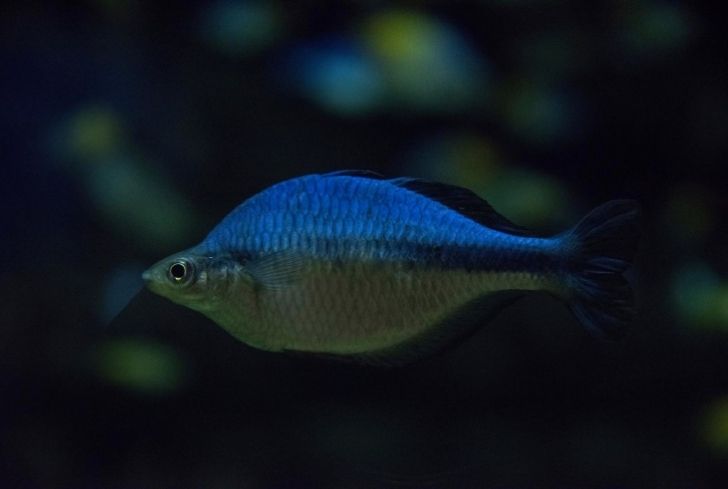 The Lake Kutubu rainbowfish requires a tank that can hold at least 20 gallons of water and can maintain a temperature between 68 and 75 °F (20-24 Celsius). This fish is also an egg layer. 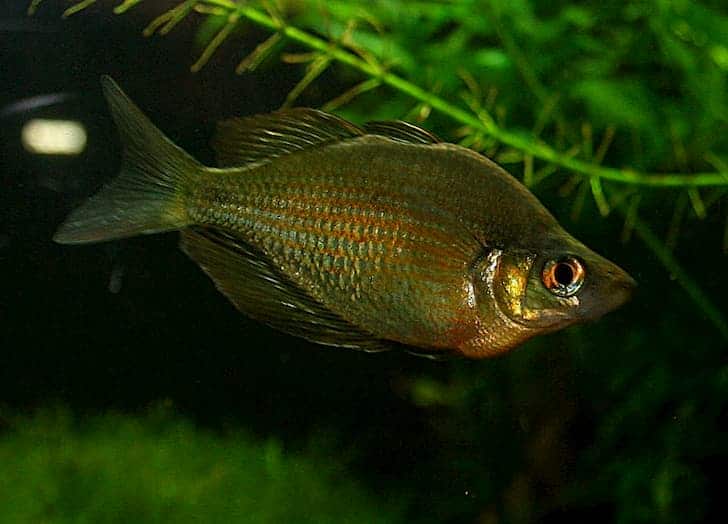 The Lake Wanam rainbowfish (Glossolepis wanamensis) is yet another type of rainbow fish that is very peaceful in nature and is native to New Guinea. They are fairly easy to care for and can grow up to 3 inches (8 cm). This fish has a lifespan of 5 years and an omnivore diet of live foods.

The Lake Wanam rainbowfish thrive in tanks capable of holding at least 20 gallons of water and maintain a temperature range of between 79-86 °F (26-30 Celsius).

The Madagascar rainbowfish (Bedotia geayi) is a type of rainbow fish that has a Peaceful disposition and comes from the family Bedotiidae. It is native to Madagascar and may grow up to a length of 6 inches (15 cm). They usually have a Lifespan of over 5 years.

The minimum tank size required for the Madagascar rainbow fish is about 20 gallons and a regulated temperature range of 68 and 75 °F (20-24 Celsius). This rainbowfish has an omnivore diet, breeds by laying eggs, and are fairly easy to take care of.