30+ Remarkable Facts About the Planet Jupiter

Jupiter is one of the most spectacular places in the solar system. It’s named after the Roman king of the gods. Jupiter’s cloud patterns are incredibly complex, constantly changing, multicolored that looks like nothing else in the solar system. Jupiter occurs half a billion miles from Earth, a giant sphere of intrigue.

It has the most exotic weather pattern ever discovered in the solar system. The Voyager I and II that passed the planet in 1979 showed the sight of Jupiter mimicking a collection of violent hurricanes and scientists say that its exploration would present the biggest challenge ever. The following 30+ facts point to the extraordinary nature of Jupiter as revealed by scientists and seen from Earth. 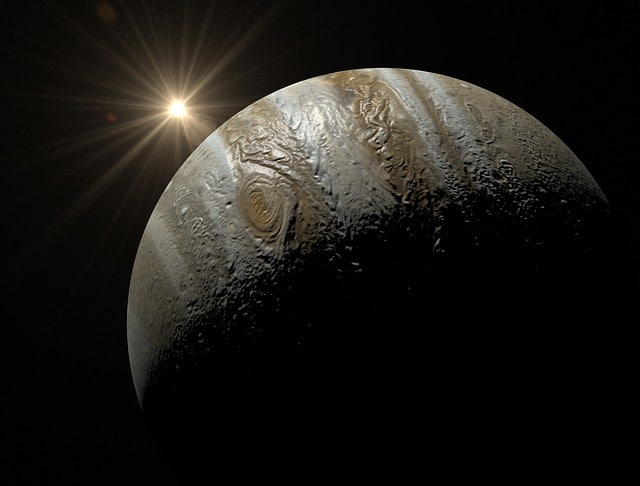 Fact 3. Jupiter experiences the shortest day than any planet in the solar system. It spins on its own axis once each 9 hours and 55 minutes. The fast rotation tends to flatten Jupiter a little bit, providing it an oblate shape.

Fact 4. Jupiter takes 11.86 Earth years to orbit the sun. This implies that when seen from Earth, Jupiter appears to move slowly. For Jupiter to move from one constellation to another, it takes many months.

Fact 5. Jupiter encompasses more than 67 moons, including the large moons known as the Galilean moons, which were initially discovered in 1610 by Galileo.

READ:  What is a Galaxy and Types of Galaxies?

Fact 8. Jupiter is one of the two gas giants in our solar system. It consists mainly of hydrogen (90%) and helium (10%).

Fact 9. Jupiter experiences damaging storms. The storms in Jupiter are rapidly moving and can grow to envelop a substantial area and cause incredible damage. The storms can grow to thousands of kilometers within a few hours.

Fact 11. The blue clouds of Jupiter can be witnessed at the deepest visible levels.

Fact 12. The ancient Greeks named Jupiter after their god Zeus. In Greek Mythology, Zeus was considered the king of all Gods.

Fact 13. Jupiter’s core is huge and dense, although its composition is not completely substantiated. However, scientists believe that a layer of helium-rich fluid metallic hydrogen wraps around its core and the whole thing is then surrounded by a dense hydrogen atmosphere.

Fact 14. There are no seasons in Jupiter like those experienced in other planets like Earth and Mars. This is due to the fact that the axis is only tilted by 3.13 degrees.

Fact 15. Jupiter has a unique visible spot called the Great Red Spot. The Great Red Spot is a huge storm that rages since 300 years ago. Scientists say the spot is so enormous that 3 Earth’s could comfortably fit in it.

Fact 16. The white clouds seen on Jupiter stem from frozen ammonia crystals. The dark clouds, on the other hand, stem from other chemicals occurring in the darker belts.

Fact 17. Jupiter has a strong gravity than Earth (2.4 times that of the earth). This means if your weight is 200 pounds right now, you would weigh 480 pounds on Jupiter.

Fact 19. Temperatures on Jupiter vary significantly. Temperature variation hinges on the depth from the upper atmosphere.

Fact 20. Another large moon of Jupiter called Europa, is an exhilarating celestial body. Europa’s crust consists of frozen solid and is made up of majorly water ice. Scientists believe that beneath the frozen ice sits a huge body of liquid water, which is twice the amount f water present on Planet Earth.

Fact 21. Scientists are also of the view that Ganymede and Callisto might also contain icy oceans lying underneath their crusts.

Fact 22. The same scientists converge to the belief that Callisto’s surface consists of colorless dark rocks. The colorless dark rock composition is thought to be because Callisto contains the lowest Albedo or reflectivity among the 4 Galilean satellites.

Fact 23. What took scientist by surprise is the fact that Jupiter has a thin ring system like Saturn. In fact, its three ring composition surprised scientists more. The rings were discovered in 1979 around the planet’s equator by the NASA’S Voyager 1 spacecraft. However, Jupiter’s rings are fainter than Saturn’s, by far.

Fact 24. The ring appearance on the innermost part is referred to as the halo. The halo mimics a cloud and features a thickness of about 20, 000 kilometers (12, 000 miles).

Fact 25. The second ring wrapping around Jupiter (which is the main ring) is significantly brighter compared to the halo. However, they have one thing in common: they are made of dark and small particles.

READ:  40+ Stupendous Facts About the Sun

Fact 26. The outermost Jupiter ring is known as the gossamer ring. The gossamer ring is transparent and consists of microscopic celestial bodies. The debris is mainly composed of dust particles featuring a diameter of less than 10 microns.

Fact 28. Jupiter’s atmosphere has a lot in common with the sun; it’s chiefly composed of hydrogen and helium.

Fact 29. Due to Jupiter’s enormous magnetic field, it’s able to trap electronically charged particles like electrons. These particles are responsible for the belt seen around Jupiter. The rings and the moons of Jupiter are frequently blasted with radiations.

Fact 30. The radiation coming from these belts is extremely strong. In fact, it’s stronger than the dose of radiation applied to humans.

Fact 31. The whole magnetic sphere and the charge particles span 600 miles behind Jupiter and about 600,000 miles to 2 million miles towards the sun.

Fact 32. Jupiter emits powerful radio waves that are able to be detected from Earth. Jupiter transmits these radio waves straight from its radiation belt and through different magnetic fields found in the solar system.

Fact 33. Jupiter’s unique spot called the Great Red Spot changes color frequently. The color changes from brick red to light brown. Scientists think this frequent color change is as a result of small quantities of sulfur and phosphorous crystals occurring in the clouds of Jupiter.

Fact 34. Lo, the innermost moon of the 4 Galilean moons of Jupiter, is the most volcanic active celestial body in the solar system. The moon has a characteristic yellow-orange appearance due to the sulfur spewed out by it volcanic activities.