30+ Interesting and Breathtaking Facts About Comets

Gazing at the stars on a beautiful star-adorned sky at night, no doubt, is very fascinating. However, when one of the star-like objects moves from one point to another, with a trail of light at its tail, the fascination goes a step further. Then, this question comes to mind ‘what was that?’ Well, that must be a Comet.

Although, scientists have been unable to agree on whether to refer to comets as ‘dirty snowballs’ or ‘snowy dirtballs’, comets are celestial objects which have a nucleus of ice and dust and tiny pieces of rock. When they come near the Sun, a tail of gas and dust particles, highly visible and pointing away from the sun is produced. This is known as a coma. Here are 30+ interesting facts about comets. 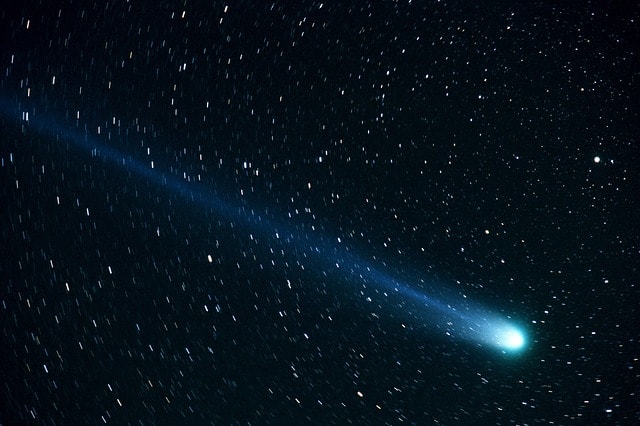 Fact 1: Comets are neither spaceships nor alien bases: Most people hold the belief that comets are alien bases or space ships. However, comets have been proven to be fascinating bits of solar system material with an origin which dates back to the formation of the Sun and the planets.

Fact 2: Comets might have brought life and water to Earth. An amino acid ‘glycine’ was detected from a sample taken from a comet named ‘Wild-2’ by a NASA space probe in 2009. This amino acid, an essential building block of life suggests that comets could be conveyors of some form of life.

In a recent study, it was suggested that several comet collisions might have brought about 22 trillion pounds of organic material to Earth alongside provision of energy for the synthesis of more complex molecules from these starting materials. Again, a team of scientists in 2011 discovered that the chemical composition of water inside a comet is similar to the water in Earth’s oceans, which suggests that comets might have brought water to earth some billions of years ago.

Fact 3: Comets have their own atmospheres: As comets approach the sun, ice in their nuclei is melted by radiant heat from the sun to give a gas. The gas spews outward from the nucleus, forming a thin luminous atmosphere that can grow up to 60,000 miles or more in diameter. This is called a ‘coma’. Comet Holmes, in 2007, was found have an astonishing coma, about 869,900 miles in diameter. Quite larger than the diameter of the sun!

Fact 4: Comets can strike our planet: A research suggests that a comet smashed into the Sahara desert some 28 million years ago. Also, scientists reported that a tiny pebble found in Sahara, named ‘Hypatia’ came from a comet’s icy core (or nucleus).

Fact 5: Comets are very many: So far, only about 4,000 comets have been discovered. Research suggests that there may be much more than this number of comets to be discovered, putting the figure at some hundreds of millions or trillions, perhaps.

Most nuclei are less than 10 miles across, and are irregularly shaped because, unlike planets and stars, their low mass does not exert enough gravitational force to make them round in shape.

Fact 7: All comets orbit the sun: Comets come are of different shapes and sizes, but, they all orbit the sun. Comets which complete their orbit around the sun within a short time come from the Kuiper belt. The Kuiper belt is a disc-shaped region of icy bodies located beyond Neptune’s orbit. It take less than 200 years to make a full orbit.

Long-period comets such as ISON originate from the Oort cloud. The Oort cloud is a swarm of objects that lies at some hundreds, or thousands of times farther than the Kuiper belt near the edge of the solar system. Comets from the Oort cloud can take millions of years to complete an orbit.

Fact 8: Comets have two tails, not one: As comets approach the sun, solar wind and the sun’s magnetic field sweep particles from the coma into tails that extend behind the comet’s head. Dust particles form a curved tail can stretch up to 60 million miles in length.

Comet ISON’s dust tail is observed to span about 57,000 miles. Ionized gases form a separate, blue-colored tail that points directly away from the sun and can stretch over a distance as long as 360 million miles.

Fact 9: Comets have been observed for millennia: Around 500 B.C, some Greek philosophers coined the word “komotes” which means “long-haired”. The term ‘komotes’ was used to refer to the comets they observed in the sky at that time. The most famous comet ever observed by Man, of course, is Halley’s Comet. Its orbit brings it near Earth once every 76 years.

It is said to have been first recorded by Chinese astronomers in 239 B.C. However, some people argue that it was spotted in Greece around 467 B.C. It was Edmund Halley who first concluded in 1705 that three comet sightings from 1531, 1607 and 1682 were most likely observations of the same comet. Interestingly, Halley’s Comet is set to appear in July 2061.

Fact 10: Comets have inspired some wild superstitions: From time immemorial, comet appearances have always been interpreted as signs of impending doom or indicators of good fortune.

Fact 12: Comets can become extinct or explode: Comets can lose their volatile materials and becoming small lumps of rock. The sun’s gravity can break them up into pieces when they pass a little too close to the sun

Fact 13: Comets are often referred to as ‘snowy dirtballs’ or ‘dirty snowballs’: This is because they are composed mostly of rock, ice, gas and dust.

Fact 14: Comets orbit the Sun in elliptical paths: The path of a comet on its orbit around the sun is elliptical, although it is far more elliptical than that of any planet.

Fact 15: A comet has four components: a nucleus, a coma, an ion tail and a dust tail.

Fact 16: The nucleus of a comet contributes the vast majority of its total mass.

Fact 17: Comets exhibit a halo when they move close to the Sun: The solar radiation vaporizes the ice and gas in the comet to give a halo around the comet. The halo is referred to as t8e comet’s coma.

Fact 18: The ion tail of a comet results from solar winds that blow the gas particles directly away from the Sun. This produces the elongated tail-like appearance of comets.

Fact 19: A comet’s dust tail is a trail of rocky material and rock materials that is left behind as it moves along its orbit path.

Fact 20: Comets are of two regions: Comets are believed to originate from either the Oort Cloud, or the Kuiper Belt, found beyond the orbit of Neptune and the dwarf planet Pluto.

Fact 22: The Kuiper Belt is a ring made up of dormant comets located just beyond the orbit of Neptune . The comets originating here have orbits lasting some hundreds of years or fewer.

Fact 24: A great comet is one which is bright enough to be visible from Earth without the need of a telescope. On average, about one great comet is sighted every ten years.

Fact 26: The closest point in a comet’s orbit around the Sun is called a “perihelion”. The most distant point from the sun’s position is called “aphelion”.

Fact 27: As a comet gets closer to the Sun, it loses some of its mass as it sublimes. If a comet orbits the sun at a very close distance to the sun for a long period of time, it will eventually break up. Comets also break up if they come too close to a planet in their orbits.

Fact 28: Comets are made of frozen water and super cold methane, ice, carbon dioxide and ammonia. Those are mixed with dust, rock and other metallic bits of solar system debris.

Fact 29: Comets have two tails: a dust tail (which can be seen with an unaided eye) and a plasma tail, (which is easily photographed, but difficult to observe with unaided eyes).

Fact 30: Impact with Jupiter: A comet named Shoemaker-Levy 9 spectacularly collided with Jupiter in 1994. The gravitational tug of the planet tore the comet into pieces. About 21 visible impacts were recorded for this collision.

A massive fireball rising to a height of about 1,800 miles was the result of the largest collision observed. The collision left a giant dark spot extending up to 12,000 kilometers in diameter. Scientists estimate that the collision had a force equivalent to about 6,000 gigatons of Trinitrotoluene (TNT)