What is a Valley?

The very common landforms on the planet are valleys. Valleys that exist today were formed by the geological conditions occurred thousands of years ago. They usually have rivers and habitat of various wildlife species. Flora and fauna in a valley are dependent on the location of the valley, weather condition, and amount of water available.

Valleys are depressed or low landforms scoured and washed out by the forces of water, ice, and gravity between two hills or mountains. They get created by running rivers, shifting glaciers, and separated earth’s crust. Generally, valleys take either V-shape or U-shape. 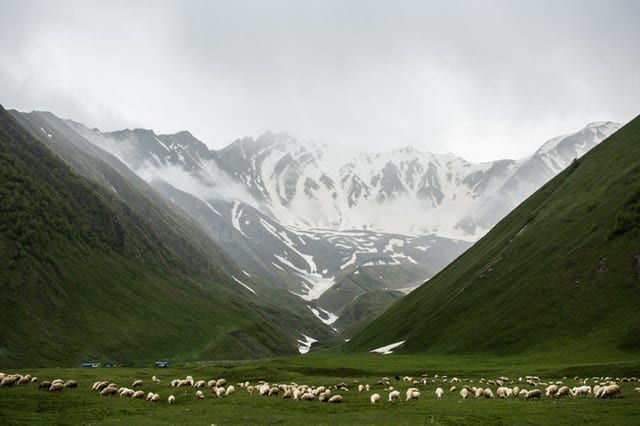 Some of the valleys tend to hang while others are hollow. However, every hole is not a valley. Valleys are long and sloping in a single direction. Usually, a river or stream is found running in the bottom of the valley but not always. Some are even found dry.

What is a V-shaped Valley?

How is a V-shaped Valley Formed?

These geological formations appeared by erosion over time. In the upper course of the river, vertical erosion is more dominant compared to lateral erosion. While flowing downhill quickly, rivers remove maximum sediments from the bottom floor of the river channel than from riversides. This process is known as downcutting. It could be better understood by an example of a knife cutting through a cake.

The river in their upper course carries rocks and stones in its water. The water force and the grinding of rocks and stones carve out a valley cutting down the river bed. A valley becomes more profound and broader over time. The river gradient that is how quickly it drops determines the steepness of the sides and the floor width of the valley. The steeper the river is, the deeper the valley it creates.

The water from rain, snow and melting ice flows down the mountain to create a valley. At the mountains, this water carves down the earth below for millions of years to form valleys. The valleys in the mountains usually have near-vertical steep walls and a narrow channel, but the slopes of those valleys remain shallow, and the channel at the bottom is broader on the plains.

1. Grand Canyon of the Colorado River

Grand Canyon is the most popular V-shaped steep-walled canyon of the Colorado River in Arizona, US. The Grand Canyon is more than a mile deep (6,093 feet or 1,857 meters), 277 miles (446 km) long, and 180 meters (590 feet) to 30 kilometers (19 miles) wide. It was formed when the Colorado River carved into a tall upward of sedimentary rocks exposing the Earth’s geological history of around two billion years.

Located in the Yosemite National Park in Central California’s western Sierra Nevada Mountains, Yosemite Valley is a famous V-shaped glacial valley. The valley is about 7.5 miles long and approx. 3000–3500 feet deep. The high granite summits such as El Capitan and Half Dome surrounds the valley. It contains a dense forest of pines.

Iao is a lush, river-cut V-shaped valley in West Maui, Hawaii located 3.1 miles west of Wailuku. Iao Valley is a popular tourist destination because of its rich history and natural environment. It was designated as a world heritage site in 1972.

4. Muretto Pass in the Swiss Alps

On the border between Switzerland and Italy, there is a high mountain pass in the Alps called the Muretto Pass. It connects Maloja in the Swiss canton of Graubünden with Chiesa in Valmalenco in Lombardy, the Italian region. The pass lies between Monte del Forno and Piz Fedoz and traversed by a trail.

Gunnison National Park’s Black Canyon is in western Colorado. It surrounds a portion of a deep, steep-walled gorge carved through Precambrian rock by the Gunnison River. The dramatic drops and the striated painted wall cliff of Black Canyon can be viewed from the roads and trails along the north and south rims. The wildlife includes elk, mule deer, and golden eagles.

The upper Inn valley or Inntal is the V-shaped valley around the Inn river in Switzerland, Austria, and Germany. It has a total length of 517 km. The valley is divided into the sections such as Engadin (Switzerland), Tyrolean Inntal (Tirol, Austria), Bavarian Inntal (Bavaria, Germany), and Upper Austrian Inntal (Upper Austria, Austria) based on regional and national frontiers. This valley contains around 40 ski resorts, and Serfaus-Fiss-Ladis is the biggest amongst them with the total slope length of 198 km.

The Napf is a mountain located on the border in the middle of the Swiss cantons of Bern and Lucerne. This summit of the Napfgebiet (Napf region) has an altitude of 1,408 meters (4,619 ft). The hilly Napf region is lying between Bern and Lucerne. The Brünig-Napf-Reuss line crosses the area.

The Zürcher Oberland or Zurich highland is in Switzerland. It is the hilly south-eastern part of the canton of Zurich, bordering on the Toggenburg, including the districts of Uster, Hinwil, Pfäffikon and also the Töss Valley, Winterthur district.

The Engadin is a long high Alpine valley region in the eastern Swiss Alps located in the canton of Graubünden in the extreme southeastern part of Switzerland. It extends to about 60 mi (100 km) from the Inn’s source by the Maloja Pass (5,955 ft [1,815 m]) northeast to Finstermünz (3,621 ft), near the border of Austria. About 25,000 inhabitants live in this valley.

The Rhine and the Mosel, these V-shaped valleys are now widely known as one of the most beautiful hiking destinations in Germany. The famous long-distance trail “Rheinsteig,” runs for 320km (199 miles) along the eastern bank of the Rhine, featuring the spectacular views across the picturesque Rhine valley. Another popular long-distance hike is the Mosel Valley’s “Moselhöhenweg” (Mosel High Route) that runs 390km (242 miles) along both sides of the river.

Fact 2: V-Shaped valleys are recognized from their V-shaped cross-section.

Fact 3: Glaciers often follow a river valley and change its shape from V to U-shape.

Fact 4: A river or glacier cannot create a valley when two plates do not touch completely.

Fact 5: Extremes of temperatures are usually observed in the valley in summer and winter. In deeper valleys, there is more fluctuation of temperature.

Fact 6: Valleys are often protected from strong winds and harsh storms, but most of them are vulnerable to flooding.

Fact 7: Valleys that are very narrow with side walls very high often referred to as gorges.

Fact 9: Grand Canyon of the Colorado River is the most famous V-shaped valley in Arizona.