How do Rainbows Form?

Rainbows are among the most beautiful nature’s displays. Neither it is a “thing,” nor does it exist in a particular “place.” A rainbow is rather an optical illusion or phenomenon that is not controlled by human beings and appears when sunlight and atmospheric conditions are just right and also the viewer’s position to see it.

A rainbow occurs as a result of the interaction between sunlight, water and air, and this is the reason why it is mostly visible when there is a sunny, rainy day. The formation of a rainbow involves physical phenomenon, which includes dispersion, refraction, reflection and total internal reflection. 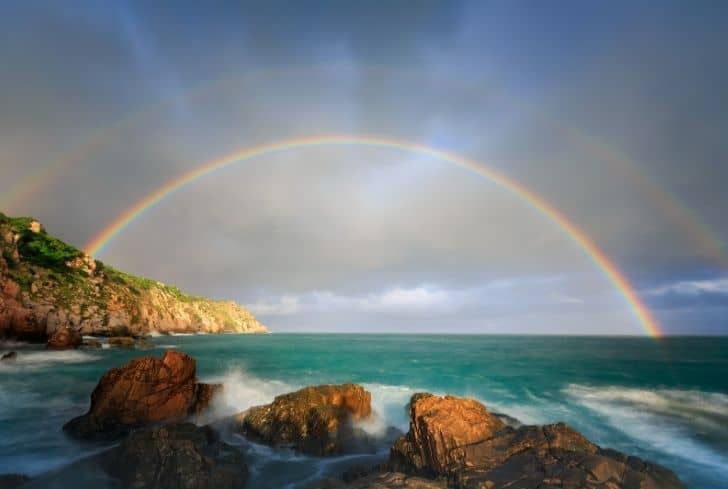 A Rainbow is formed due to sunlight and atmospheric conditions. Light enters a water droplet, slows down and bends as it goes from air to water, which is denser. The light reflects off inside the droplet separating into its component wavelengths or colors. When light exits the droplet, it creates a rainbow. This happens when the rays from the sun come into contact with the raindrop at a certain angle.

Step by Step Process of Formation of a Rainbow

The formation of a rainbow is described step by step below:

White light from the sun should hit the water droplets at a certain angle. The angle formed is very crucial since it determines whether the rainbow will be formed or not. Rainbows form mostly at dawn or late afternoon since it is best if the sun is fairly low in the sky and provides the ideal angle to form the rainbow. When the angle is not appropriate, we are not able to see the rainbow.

2. Some of the sunlight is reflected

When the rays from the sun strike or come into contact with droplets of water, the light from the sun is reflected. In the process, the light obeys the law of reflection. It can be better understood when we see through a glass window, but, at the same time, our own reflection can be seen. This is because the window both transmits and reflects light. Water can do this too.

3. Rest of Light Gets Refracted

The light that is not refracted crosses the boundary layer of air and water and slows down since water is denser than air. The reduction of speed makes the path of the light to bend, which is called refraction. This is the reason why the rainbow is always curved or bent towards the normal line.

White light is made up of a spectrum of colors, each having its own wavelength. Different wavelengths travel at different speeds while they encounter a change in the medium that is denser or less dense; the speeds are affected by the difference in amounts. Hence, the colors separate. This phenomenon is known as Dispersion. This is why the rainbow has got different colors.

5. Lights Get Reflected Behind the Rain Drop

As the light exits the raindrop, its speed changes. Since at this point, movement of the light is away from a denser (water) to less dense (air) medium, the speed is thus enhanced. The rise in the speed causes the light waves or path of the light to bend away from the normal line. This is another example of refraction. This refraction contributes to the shaping of the rainbow.

As the rays get refracted once more, the various wavelengths are affected to different extents and enhance the clear formation of the rainbow colors. With the further separation of the component colors of white light and refraction, the definite colors and shape of the rainbow are visible with dispersion.

Why Rainbow Appears After the Rain?

Three conditions must be fulfilled to see a rainbow. First, it must be raining because a rainbow requires water droplets to be floating in the air. That’s why it is visible right after it rains. Second, the sun must be shining. Third, the observer’s location must be between the sun and the rain.

The Sun must be at your back, and the clouds cleared away from the Sun for the rainbow to appear. In the sky, the lower the sun is, the higher is the arc of the rainbow.

How Does a Rainbow Get its Colors?

Isaac Newton established that due to refraction, white light tends to separate into its constituent wavelengths. Newton’s contribution gave a new understanding that white light is a mixture of colored light and that each color is refracted to a different extent. The different colors correspond to light with different wavelengths and are refracted to differing degrees. This process of separation of colors is called dispersion.

Once the colors in sunlight are separated by refraction, we are able to distinguish them in the splendor that is a rainbow, a spectacular ray of colors. Sunlight looks white, but it’s really made up of different colors like violet, indigo, blue, green, yellow, orange and red (VIBGYOR).

The sun creates rainbows when white sunlight passes through raindrops. Here, the raindrops work like tiny prisms that bend the different colors in white light, so the light spreads out into a band of colors that can be reflected back to you as a rainbow.

What do the 7 Colors of the Rainbow Mean?

Similarly, the other colors are also ordered as per their wavelength. Likewise, other waves of light are also reflected from the rainbow; however, these light waves are not visible to our naked human eye. Also, these invisible rays are found to be present on both sides of the rainbow.