Angel Falls is one of the most breathtaking natural wonders of the world. Located in the Guiana Highlands in Bolívar state at southeastern Venezuela, it is one of the major attractions of Venezuela. The falls is on the Churún River, which is a tributary of the 260 km long Caroní flowing through the southeast of Ciudad Bolívar. There is a dense forest surrounding the falls, and hence, if you want to get the best view, you need to take the aerial route. Here are some worth mentioning exciting facts about the natural landscape of the Angel Falls. 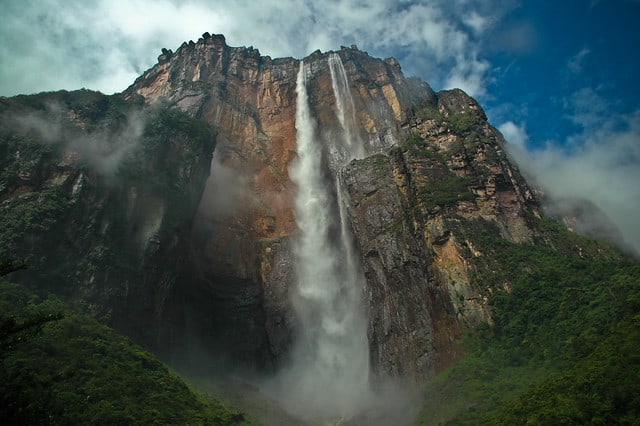 Angel Falls exists as the highest continuous waterfall in the world. It tumbles down from a cleft near the tabletop mountain Auyán-tepui’s summit into the 979 meters (3212 feet) Devil’s Canyon with the longest plunge of 807 meters (2647 feet).

Fact 2: Significance of the Name

In Pemon language, the falls is called Kerepakupai Meru meaning “waterfall of the deepest place,” or ParakupáVená, meaning “the fall from the highest point,” while in Spanish Angel falls is known as Salto Angel.

Fact 3: Origin of its Name

The falls were named after air-borne American gold prospector James Crawford (Jimmie) Angel. He first flew over the mountain in 1933 and accidentally discovered Angel Falls while searching for a precious ore bed. Charmed by the beautiful landscape, James again returned to the falls in 1937 accompanied by his wife and acquaintances.

Jimmie landed his aircraft successfully on the heart-shaped summit of Auyán-tepui, however, wheels of the plane were submerged in the mud and remained marooned until 1970. The group trekked across the rough terrain for 11 days, and thus, the world came to know about Jimmie’s discovery and the falls was named after Jimmie.

The rest is history, and Angel falls became the wonder tale around the globe. Jimmie’s plane is kept at the Aeronautics Museum of Maracay for display.

In late 2009 Venezuelan President Hugo Chávez announced that the falls should be given an indigenous name and be referred to as KerepakupaiMerú.

Angel Falls is part of the plateau located to the south of the Orinoco River. The plateau is estimated to be two billion years old and has significant geological transformations. It existed from the beginning of the Precambrian period dating back to the time of the formation of the supercontinent Pangaea.

Angel Falls was unknown to the world before the mid-1950s. The indigenous Kamarakotos Pemon tribe who inhabited the region alongside Auyán-tepui also found to stay away from the remote location of the Angel falls in fear of malign spirits.

The Angel Falls’ height (979 meters) is three times the height of the Eiffel Tower, the landmark of Paris.

The width of the waterfall is about a hundred and fifty meters at the base. It feeds into a river known as the Kerep.

Canaima National Park is the second largest national park of Venezuela and the gateway of Angel Falls. The park, which is almost the size of Belgium, was set up in 1962 and declared a World Heritage Site by UNESCO in 1994. The Canaima National Park has two segments – east and west. Angel falls lie in the western section.

The waterfall dives over the edge of the Auyán-tepui mountain in the Canaima National Park. It is located in the Gran Sabana region of Bolívar State. This park contains amazing tropical wildlife with its incredible vistas.

READ:  What is a Flood and What Causes Flooding?

An incredible variety of exotic wildlife surrounds the falls. It is the habitat for 500 species of birds, 500 species of orchids, ocelots, and others. It includes monkeys, poison-arrow frogs, and hundreds of species of orchids. Besides monkeys, one can rarely spot mammals in the area. However, giant anteaters, armadillos, porcupines, three-toed sloths, otters, jaguars, pumas, tapirs, and capybaras are seen sometimes.

Fact 11: Traveling to the Falls

Visitors generally fly from Ciudad Boliver, a colonial town, or Caracas, the capital city of Venezuela, to Canaima camp. After reaching the Canaima camp, tourists can start the expedition to Angle falls, which are 50 km away from it. They can proceed to the falls either by boat or by air.

Motorized canoes carry passengers from Canaima camp to Angel falls in an average time of five hours. The boat service is available from January to May. Trips to the Angel Falls can be booked with various tour operators in advance or through park lodges upon arrival at Canaima camp.

Visitors can trek through dense, lush jungles of Venezuela to different viewing points. There are options for hiking, boating and excursions to indigenous villages for an afternoon or few nights as per the hiking interests and abilities. These exciting tours can be booked in advance or upon reaching the camp.

Skydiving is a popular activity off Angle Falls. Adventure seekers also climb the mountain, sleep in hammocks, or stand at the bottom under the falls. Trekking to Roraima, the tallest tepui in the park measuring 2810 meters at its highest point is always favorite among crazy adventure lovers. It takes 5 days to reach its summit. When the flow is slow, travelers are allowed to swim in pools formed by the plummeting water.

There is a renowned walkway between Sapo (“Frog”), and Sapito (“Little Frog”) falls in the Canaima National Park. It gives a heart-throbbing opportunity to walk behind the curtain of water cascading down the mountain. The Kevác Canyon and its striking waterfall La Cueva located in the northwest of Kamarata is also worth watching.

The falls is accessible only through the Canaima National Park, which again can be reached only by air. There is no overland route to the falls. Rutaca and Avior airlines provide flight options for passengers from the Canaima camp’s airstrip. On the way, they will take you over the lush green dense forest, ancient mountains, rivers, waterfalls, and lagoons to witness this magnificent natural wonder. Those who can afford can even hire a charter or private plane to get to the Angel Falls.

During the rainy season, the falls create its weather. People can feel mists settled on their skin if they are within a one-kilometer radius of the falls in that time of the season.

The Venezuela government allowed tourism to Angel falls since 1990. The first visitors stayed in the Boulton camp, now known as Campamento Canaima.

The best time to visit is between the period of May and November when the falls is in full bloom. The falls dry to a dribble between December and April.

Angel Falls inspired Disney to create similar falls called the Paradise Falls in their 2009 animated film UP. The falls have been featured in 1990s film Arachnophobia and 2015 thriller movie Point Break.

Travelers must get themselves vaccinated against yellow fever before flying out to Canaima camp.

A range of tourist accommodation is available at a short jeep rides away from the camp. Please note that no camping is allowed at the Canaima National Park. But, there is also the miniature-indigenous run resort providing few thatched huts with a small shop, tiny airstrip, and accommodation for guest.