Amazon River is the largest in Latin America which originates in the Andes mountain of Peru and then flows through the states of Ecuador, Columbia, Venezuela, Bolivia, and Brazil before it finally meets the Atlantic Ocean. The river is the source of life to humans and animals living on its banks, the bed of adventure, spine chilling stories, and many more. You must have watched movies based on the Amazon River and its surroundings. Let’s have a look at some amazing facts related to the Amazon River. 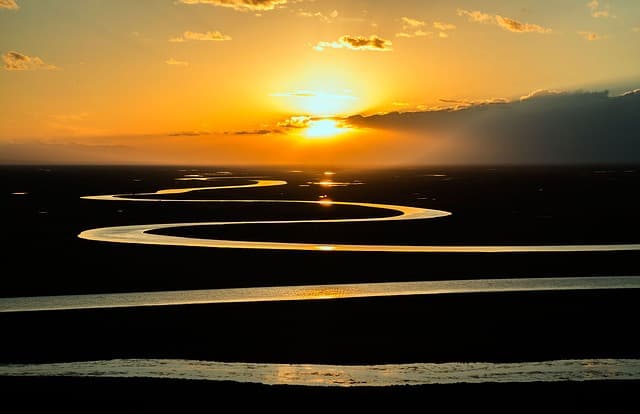 20+ Amazing Facts About the Amazon River

Fact 1: In terms of length, Amazon is the second largest river just after the Nile. It originates from Mantaro River, discharges 209,000 cubic meters of water and empties in the Atlantic river.

Fact 2: Since the majority of the Amazon River runs through rainforests, and not cities, there is no bridge over the Amazon River. The river distinctly divides the entire continent into two halves.

There were very few cities, like Macapa in the North shore of the delta, where almost half a million people thrive, but you won’t get a single road that connects the rest of Brazil. The only direction that will lead you out of the forest is driving north via French Guiana.

Fact 3: The total discharge of the Amazon River is more than that of the seven largest rivers (following Amazon) taken together.

Fact 4: Amazon is regarded as the largest drainage basins of the world, spanning over 7,05, 000 square kilometers, which accounts for over one-fifth of the total river basin of the world.

Fact 5: When dry season approaches, the width of the Amazon River ranges between 1.6 to 10 kilometers and during the wet season, the same vary till 48 kilometers.

Fact 6: The Amazon River enters the estuary that has a width of 240 kilometers with the primary mouth spanning over 80 kilometers in diameter. The estuary is often referred to as ‘The River Sea’ because of its immense width.

READ:  What Do Clouds Taste Like? (And Can You Eat a Cloud?)

Fact 7: The Amazon River is known by several names in various countries. As such, in Brazil, while at the confluence, the Rio Negro is known as Solimoes.

Fact 8: In Latin America, while the river flows through the Spanish speaking countries like Ecuador, Columbia, and Peru, it’s known as Amazon downstream.

Fact 10: Protection of the Amazon rainforest surrounding the Amazon River still remains an issue. Deforestation has been reduced, while areas of conserved land have increased over the last 10 years.

Almost 7900 square kilometer area has been removed of the greenery between August 2017 and July 2018, which is an area approximately five times that of London. Amazon river basin, which is also known as the lungs of the earth, will face dangerous consequences if this sort of deforestation continues.

Fact 11: More than 3,000 species of fishes can be found in the Amazon River basin. Noted amongst them are the Arapaima, Tambaqui, Candiru, Red-bellied piranha, armored catfish, Electric Eel, pancake stingrays, Bullshark, Payara vampire fish, and Tucunare peacock bass. Some of the most dangerous species amongst them are the green anaconda and piranha.

Fact 12: Almost 20% of the freshwater that comes from the earth’s crust enters the Amazon River. The freshwater being lighter flows above the sea water. This freshwater tends to dilute the salinity of the sea water, and it changes the color of the ocean surface over a span of about 1,000,000 square miles.

While the set season commences, the flooded area of the Amazon River basin rises to 350,000 square kilometers. The ocean-going ships have navigated its water where it meets the sea.

Fact 13: Amazon River dumps sediments from the sea directly to the ocean. There is the presence of high current, and that confirms why the Amazon can never form a delta at the confluence of the ocean at its mouth.

Fact 15: Amazon River has a total of 1,100 tributaries. Out of all these, 17 are longer than 1500 kilometers. Floods occur in the Amazon River basin each year, and this phenomenon is known as ‘pororoca.’

It’s also known as the longest surfable wave in the world. A tidal bore present in the huge Amazon is famous, but you can surf only twice during the year.

Fact 16: Amazon rainforest surrounding the Amazon River is considered the densest forest in the world. It covers an area of 5,400,000 square kilometers. Almost 25% of the pharmaceutical products of the world are based on the ingredients obtained from the Amazon rainforest. There are more than 3,000 fruits present in the Amazon rainforest, out of which only 200 are consumed by the people of the western world.

Fact 17: About 30% of the carbon emissions of the world come from burning the plants of the Amazon rainforest.

Fact 18: The Amazon River originated as a transcontinental river somewhere in the period 11.8 to 11.3 million years back in the Miocene epoch age. The river took its current shape about 2.4 million years back.

Fact 19: The Amazon rainforest is one of the densest forests of the world, and there is a thick canopy which results in permanent darkness. When raindrops fall, it takes about ten minutes to reach the ground. So you can imagine how much dense the forest could be.

Fact 20: River Amazon shelters one of the deadliest species which can be life-threatening. You may get injured by the orifice attacking leeches, which can even get inside the human skin penetrating deep and causing death. There are also malaria-bearing mosquitoes which could be lethal to humans.

Candiru is reportedly a penis burrowing fish that can swim into the urethra, bladder, anus or vagina and is difficult to get rid of unless it retracts or pulls backward. Resulting yellow fever causes vomiting, chills, and headache and can potentially kill a person in no time. So, to your imagination, the Amazon River basin can be no lesser than a death trap.

Fact 21: Scientists from NASA have discovered that the sand from Sahara desert, Africa flows to the Amazon River basin, thereby enriching its nutrition content.

Fact 22: The Amazon River used to flow in the opposite direction 15 million years before. The content of the river was emptied into the Pacific Ocean. But later it changed its route and lakes were formed, which took almost 5 million years. Now, the content is drained into the Atlantic river.

Fact 23: Amazon is home to a very rare species of dolphin which appears pink after it blushes.

Fact 24: The mighty Amazon River flows across a tract of 4300 kilometers and has around 500 tributaries. But due to its toxicity, the water is unfit for human consumption.

Amazon is no lesser than a mystery. It’s the source of life as well as a trap for death, with so many deadly species waiting for its prey. Conversely, the world’s solution to fatal diseases can be found over here. Amazon is a rich source of atmospheric oxygen and considered as the lungs of the planet.

While the savannah grasslands of Africa shelter wildlife, Amazon is the mother to various endangered species, both plants, and animals. An adventure trip to the Amazon River basin can also be a lifetime experience.

15 Facts About the Amazon River That’ll Blow Your Mind