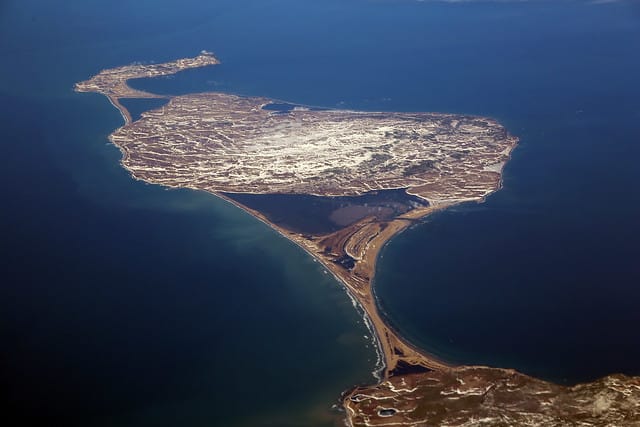 Thus, after several millions of years, the continued deposition of solid deposits by volcanic activity and other geologic events, which in turn lead to an increased solid land form continues to grow. Tectonic plate movements at the sea bed contribute to a gradual fusion of the separate land forms at the sea bed, as the solid deposits gradually move towards each other to form a continuos body of solid landform.

However, this processes lead to the formation of an isthmus when the land formation takes the nature of narrow strip laid between two larger pieces of land. The tectonic plate movements, volcanic activity and other geologic events which eventually lead to the fusion of the separate land forms at sea, results in the formation of a continuos narrow strip of land, which is bounded on either side by a body of water.

READ:  What is a Fossil: Formation, Types and Facts

This continuos strip is also formed as a result of the collection of sediment by the separate, solid deposits at the sea bed. As the spaces between the solid deposits at the sea bed fills up, the land form becomes more prominent, although, being submerged in sea water, it would not be able to completely obstruct the easy flow of sea water above it.

Furthermore, some volcano may lead to the formation of chains of islands over time.  The solid landforms within the body of water usually form slowly over a very long period of time. The time required for a complete formation of an isthmus landform may range from a few thousand years to some millions of years, for example, the Isthmus of Panama was estimated to have being completely formed about 4 million years ago, whereas, it had been discovered for as long as about 19 million years ago. block a channel and collect sediment, which over time, leads to the formation of an isthmus.

However, a drop in sea level may be required for a proper exposure of the narrow strip of land formed as a result of tectonic plate movement, volcanic activity and other geologic factors over  a long period of time.

In addition, a similar landform to an isthmus is a ‘tomobolo’. The processes of forming a ‘tombolo’ is quite similar to the formation of Isthmus landforms described above. The only difference between an Isthmus and a tombolo lies in the fact that, a tombolo landform is a narrow piece of land that connects a larger piece of land to a smaller piece of land.

Other ways by which an isthmus landform could be formed include

An isthmus can be found as a link between two larger pieces of land. It is usually found as a narrow strip of land bounded on each side by a body of water.

The following are some examples of isthmus landforms:

1. Isthmus of Kra: It is the narrowest point on the Malay Peninsula, in Thailand, directly south of the Myanmar-Thailand border. Kra lies at the head of the estuary of the Pakchan River, which forms a segment of the border.

2. Isthmus of Panama: It is a narrow strip of land which connects North and South America, comprising the Republic of Panama. The Caribbean Sea and Costa Rica binds it on the Northern side and on the South, it is bound by the Gulf of Panama, the Pacific Ocean, and Colombia. ‘Isthmus of Panama’ is occasionally used to refer only to the region of the Panama Canal. The isthmus was discovered by Spanish explorer Rodrigo de Bastidas in 1501.

3. Isthmus of Suez: It is a neck of land, located in Northeastern Egypt, 116 km (72 mi) wide, connecting the continents of Asia and Africa and separating the Mediterranean Sea from the Red Sea. The isthmus consists of a sandy, low, and stony desert, with the lowest depressions occupied by salt lakes and marshes. Fresh water is very rare.

4. Isthmus of Tehuantepec: It connects Southern Mexico and Central America with the rest of Mexico and North America.

5. Karelian Isthmus: Located in northeastern Europe, between the Gulf of Finland on the west and Lake Ladoga on the east. It connects Finland with Russia.

8. Boothia Peninsula: The peninsula is bordered on the east by the Gulf of Boothia and on the west by James Ross Strait and Franklin Strait and is joined to the mainland by the Isthmus of Boothia in the south.

The Isthmus of Panama stands out among other isthmus examples, as it is of major historical significance, The process involved in its formation over a period of about 19 million years has an enormous impact on the Earth’s environment and climate.

Economically, isthmuses are very important landforms, this is because they are very powerful tourist attraction sites. In most countries in which an Isthmus landform exists, a lot is usually spent on improving the appearance of the spectacular landscape. Such efforts include: Proper maintenance of the bodies of water on either side of the isthmus, to preserve an amazing view of the landscape, as well as construction of tourist parks around the isthmus. Again, Isthmuses are important to people because, they make travelling by land easier, and since they directly connect two land masses, they ease the migration of man and animal.