What is a Cliff?

We have many times seen pictures of a huge mass of rock standing almost vertically along the ocean or riverbanks. These are nothing but cliffs, which are a common form of landscape. Cliffs are erosional landforms that usually exist in the form of vertical or nearly vertical rock exposures. A cliff is a high steep rock or ice face. Apart from the ocean or riverbanks, cliffs can also be seen in the high mountains, walls of canyons and valleys. Waterbodies tumble over cliffs to form waterfalls.

The term ‘cliff’ applies especially to a rock face which extends along a coastline. An escarpment is a steep cliff or slope formed by a fault or by erosion. An escarpment is also called a scarp. Fault scarps are formed by a fault, which is a fracture or break in the earth’s crust, along which one side is raised and the other is forced downward. Erosion scarps are formed by the unequal erosion of gently sloping or horizontal layers of rock. An escarpment results when underlying, softer rocks are eroded more rapidly than the upper, more resistant rocks. 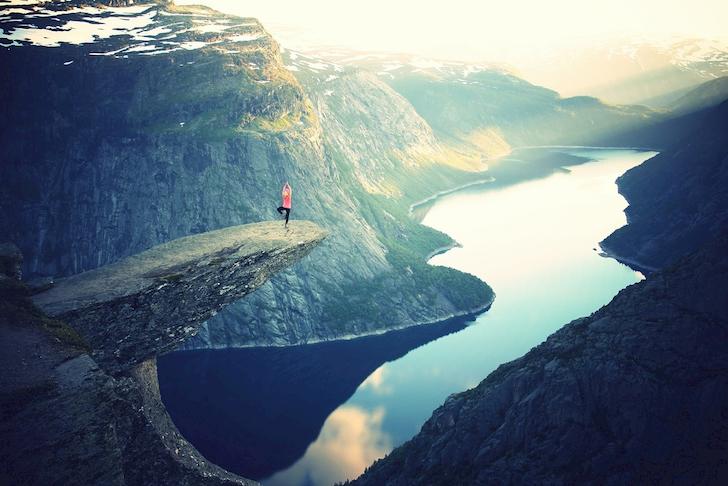 “In geography and geology, a cliff is a vertical, or nearly vertical, rock exposure. Cliffs are formed as erosion landforms by the processes of weathering and erosion. Cliffs are common on coasts, in mountainous areas, escarpments and along rivers.”

How are Cliffs Formed?

Usually, cliffs can be formed by several natural phenomena. Such a phenomenon includes the formation of cliffs from tectonic activity. Under the ground, the earth consists of large tectonic plates that shift around over time. If two of these plates meet at any point, extreme pressure is created which sometimes forces one or both of the plates upwards over time. It results in the creation of mountains and cliffs.

However, the most violent episodes of tectonic activity can result in earthquakes, which can create tears in the earth and form cliffs. Major sedimentary rocks that form a cliff are dolomite, sandstone, and limestone. Some types of igneous rocks which form cliffs include granite and basalt. Major processes involved in the formation of a cliff are discussed below.

1. Formation Through Water and Erosion

At least, one point of weakness is created when waves from the sea hit the land leading to a cut known as a Notch. This Notch formed erodes further to develop a cave. The cave develops hollows along the land leading to a mass of hard rock. As time goes, more erosion from weathering takes place making the overhanging hard part of the cave to collapse into the sea.

In some instances, cliffs are also formed along a river. In this case, as the river water flows with velocity, the water begins cutting the earth. The cliff’s walls are consequently formed on either side of the river like the Grand Canyon. When the water level gets higher during the rainy season, the speed of water increases. This leads to an expansion of the cliff.

2. Formation by Movement of Glaciers

Although the process took place a long time ago, it is believed that some cliffs were formed from glaciers. It is also believed that during the ice age, mammoth glaciers covered the earth. Due to global warming, the glacier began moving across the earth. Because of the great weight and velocity of glaciers, it formed some depressions as it flowed across the globe.

Expanse cliffs were therefore created since glaciers have tremendous weight. These types of cliffs are scattered with rock outcroppings as the main feature. In fact, glaciers lead to the formation of triangularly shaped cliffs which are broad hence known as truncated spurs.

3. Formation of Cliffs Through Tectonic Activity

Beneath the earth’s surface, there are huge tectonic plates. The plates shift from time to time. When the two plates come into contact with each other, huge pressure is created forcing one of the plates to move upwards and protrude. Although the process may take time, mountains and cliffs are created. As the tectonic plates meet and exert extreme pressure on each other, we may experience earthquakes leading to tears on the Earth’s surface. A cliff’s amount of wears and tears can be extreme enough to form a cliff.

Escarpments are common types of cliffs that arise out of the movement of a geologic fault or occurrence of a landslide. Since rocks have varying degrees of hardness, which makes some rocks become incompatible leading to differential erosion of the layers. The erosion leads to the formation of a cliff. Over time, wearing-off occurs through agents such as water or wind leading to one side being more eroded than the other. The coastal cliffs can also be classified as steep escarpments that form when the sea levels rise

Many sea cliffs are an outcome of volcanic eruptions. The island of Santorini, Ustica in the Tyrrhenian Sea or Krakatau, in Indonesia are good examples of cliffs that were formed due to volcanic outbursts. 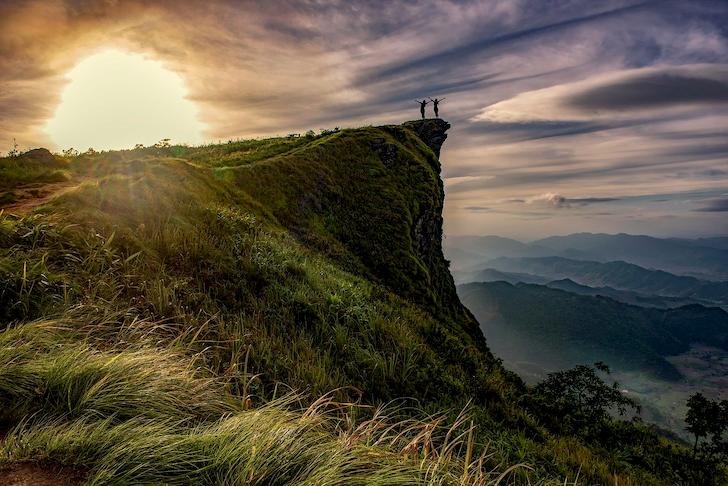 20 Magnificent Facts About the Cliffs

The word cliff originates from an old English word “clif,” which meant a large body of vertical or near-vertical rock visible from the surface.

Fact 2: The Rocks that form Cliffs

The sedimentary rocks that are found in cliffs are actually sandstone, dolomite, and limestone. On the other hand, igneous rocks that form cliffs are basically granite and basalt.

Cliffs are sometimes covered with loose pebbles or gravels on the slope. This is known as Scree. Talus, on the other hand, is usually larger than Screes and often includes house size rocks. The surface of the Talus can be so large that trees and vegetation grow on the slope.

Fact 4: The Highest Cliff in the World

The Rupal Flank is the highest cliff in the world which lies in the Nanga Parbat, a mountain in the Himalayas. The Rupal Flank has a height of 4,600 meters (15,092 feet) from its base. The cliff is in Pakistan.

Fact 6: The Tallest Cliff in the Solar System

The Verona Rupes, situated in Miranda, a moon of the planet Uranus, is considered the tallest cliff in the entire solar system. Its height is around 10 km (6.2 miles).

The world’s steepest cliffs are mostly found under the seas. These cliffs are called oceanic trenches.

Fact 8: The Highest Cliff in Europe

The Troll wall, located in Norway, is the highest cliff in Europe. The cliff is popular among jumpers for its vertical inclination.

Fact 9: Famous Cliff in the USA

The Kalaupapa cliff in Hawaii, the USA, is a large cliff with 1,010 meters vertical wall. This cliff attracts adventure lovers and tourists alike because of its features and lies 2000 feet above the Pacific Ocean.

Fact 10: Most Popular Cliff in Ireland

Cliffs of Moher are the most popular tourist attraction in Ireland. It draws around one million visitors each year. The Cliffs of Moher range from 120 to 214 meters in height above water level and lies along 8 kilometers. It is made of sedimentary rock, especially shale and sandstone.

READ:  11 Most Famous Glaciers in the World That Will Leave You Spellbound

Fact 11: Examples of some famous Cliffs

The Colorado River in Arizona, United States, created the cliff of Grand Canyon, which is 446 km long, 29 km wide and 1857 meters deep.

Most sea cliffs are considered a “work in progress” as they are continuously changing and retreating, owing to weathering and water erosion.

The cliffs and caves allure explorers and adventure lovers leading to flourishing cliff tourism business. Exploring the caves and climbing rocks, therefore, have become two major attractions for tourists around the world.

The morphological features of the sea cliffs make them danger prone. Their steepness and height are responsible for rockfalls and landslides. The rockfall is a common incident in the case of sea cliffs, and it is dangerous as it can cause injuries. Landslides are a feature mostly visible during the rainy season. Moreover, the coastal cliffs can be loose as they are made of sand, silt, clay, marl, and chalk. These loose cliffs are at higher risk of erosion and rockfall.

The majority of the cliffs are a place of residence for a large variety of animals and plants. Birds find cliffs very safe as there is the absence of predators. For humans, cliffs offer a wide opportunity for tourism and adventure sports business.

Fact 17: Threats to the Cliffs

The coastal erosion and environmental degradation along many coastal areas are causing damage to flora and fauna of the cliffs. Increased tourism and related human activities are also contributing to coastal erosion.

To prevent quick erosion of coastal cliffs, different techniques are applied. Some of them are:

In the United Kingdom, the Nature Conservancy and later the Nature Conservancy Council, both government agencies, initiated work to improve the status of sea cliff habitats around the island during the 1970s and 1980s. By the late 1980s and early 1990s, they published a “Sea Cliff Management Handbook” which provided a summary of the ecology of the cliffs and mentioned its important management methods.

In conclusion, cliffs are one of the most fascinating features one could find in our physical environment. They are often very steep, vertical and overhanging faces of rock, ice or earth; whichever form or composition they possess, the magnificent structure of cliffs is nothing but beauty to behold!