Why Do Some Rivers Change Their Course?

Rivers are natural water bodies that flow from one place to another. However, at certain time intervals, rivers change their course and move in different directions. There are some evident reasons why this happens, and some unknown reasons are there that lead to the change of course.

In this article, we will be discussing why rivers change their course over a period of time. There are some other questions related to rivers that need to be answered. So, let’s get started.

What Causes Rivers To Change Course?

Over a period of time, rivers tend to change their course due to the rocks present at the shores. It is quite simple to understand that in plain areas, rivers will take the easiest and least resistant route. The pathway that is easier to erode and cut through will be the path for the river. The speed of the flow of the river is changed due to the obstruction in the river bed.

This further gives rise to the meandering process, wherein the river flows faster, there will be less sediment deposition. When water is flowing faster, small curves will be formed. On the slower side of the river, more sediments will be more. It will cause the meander to grow.

The bend will start growing with time, making the river’s slower side get slower and the faster side even faster. The process will continue until the curves become sharp, allowing the river to cut through and re-create a straight path. It is the time when the river will change its course and start flowing in a different direction.

Such change majorly happens at the time of flooding wherein the river has more energy to join the ends. It will cut off from the main channel making the river flow independently.

Do Rivers Get Deeper Over Time?

Yes, it is found that rivers get deeper as they get old. During the youthful days of the river, it causes erosion that leads to deepening the valley. The hydraulic action will loosen and dislodge the rocks that will further erode the river bed.

READ:  The World’s 13 Most Famous Deserts You Probably Didn't Know

It will eventually deepen the river bed and make the sides steeper that will be later weathered. The river also gets deeper when the high vertical erosion completely erodes the river bed, and chunks of sediments get transported by traction.

When the banks and beds of the rivers are eroded, the river gets wider and steeper. That’s why you can witness that the old rivers are deeper than the young ones.

The erosion can take place in different time periods, so you cannot particularly decide the depth of the river by its age. You may never know what other factors have affected the depth of the year.

Over time, rivers go through plenty of change, and these changes can impact their depth. The input from other water bodies, including rain, snowmelt, seepage, groundwater, etc., will lead to deepening and widening the river at a given point in time.

What Are The Two Ends Of River Called?

There are two ends of a river; one from where it starts and the other where it ends. The direction of a river is determined by determining the ends of the river.

What is The Deepest Part of A River Called?

As mentioned earlier, the river has different parts, so evidently, there will be a part where it will be the deepest. Thalweg defines the deepest channel in the river system. It is the length of a stream bed in the downward slope.

This deeper part can be changed according to the depth of the river. Thalweg is also a term used to depict a subterranean stream that subsides under the surface. However, thalweg is still the deepest part of the river that gives you the measurement of the stream from the deepest point.

What Do You Call A River That Flows Into a Lake?

It is essential to understand that a tributary will never fall into the ocean directly. It will drain the main stem river and surrounding basin of the surface before merging into the sea or ocean.

It is because of its tributaries that some rivers are longer than usual. The tributaries are then merged with the ocean after traveling a long distance.

What Is It Called Where A River Meets The Ocean?

The river lives on a watercourse where its end goal is to merge with the ocean. Right from its youth days to old age, a river has a single aim to connect with the ocean.

There is a place where a stream or a river meets the ocean. The estuary is where the freshwater connects with the saltwater. The estuary is also called bay, slough, lagoon, or sound. In an estuary, you can see water circulating in and out.

When the freshwater meets the ocean, it turns blackish and salty. There are many beautiful estuaries in the world where you can witness the enchanting amalgamation of the river and the ocean.

There are different types of estuaries in the world that are segregated into different categories. There are 4 major categories that include coastal plain, tectonic, fjord, and bar-built estuaries.

Just like the ocean ecosystem, there is an estuary ecosystem as well. These environments provide a safer and healthy environment for shellfishes, small fishes, migrating birds, and some shore animals.

The water in estuaries is highly rich in minerals and nutrients like bacteria and plankton that sustain a diverse ecosystem. For instance, the decomposing of plant matter makes a healthy food source for many species.

Not only for animals, but estuaries can also become a great community for humans. The freshwater is hygienic for drinking; also, the access to both ocean and river can pave the way for development.

What Is It Called When Two Rivers Meet?

Not only rivers and oceans meet, but two rivers also meet and then travel to the ocean together. The merger of two rivers is called confluence. It is the process that defines the amalgamation of two flowing bodies. In confluence, two rivers will join to form a single channel that travels to the ocean.

Even two tributaries can meet confluence depending on the intensity. A confluence may occur in various configurations. Some notable confluences across the globe can grab your attention. 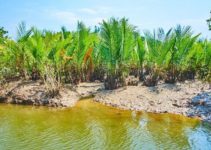