What are the Clouds?

Clouds are composed of ice crystals or water drops suspended and drifting in the sky at considerably high altitudes. The water droplets are very minute with a diameter of roughly a hundredth of a millimeter. This means that each cubic meter of air is made up of about 100 million droplets. The composition of ice crystals or water droplets depends on the atmospheric temperature and the height of the clouds from the ground. 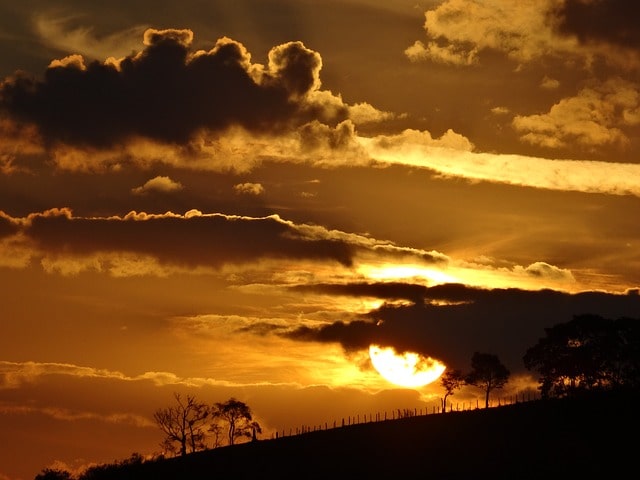 Wikipedia defines the Cloud as,

“A cloud is an aerosol comprising a visible mass of minute liquid droplets or frozen crystals, both of which are made of water or various chemicals. The droplets or particles are suspended in the atmosphere above the surface of a planetary body.

On Earth, clouds are formed by the saturation of air in the homosphere (which includes the troposphere, stratosphere, and mesosphere) when air cools or gains water vapor. The science of clouds is nephology which is undertaken in the cloud physics branch of meteorology.”

How Do Clouds Form?

Clouds are formed when water vapor in the air condenses into ice crystals or water droplets at relatively high altitudes or cold areas such as mountain tops. This does not simply occur but it undergoes a distinctive process through the water cycle. The process begins with the evaporation of water which turns into atmospheric vapor and rises to the higher altitudes where condensation takes place.

Evaporation occurs when water changes from its liquid state to a vapor or gaseous state. In most cases, solar radiation and additional causes such as the wind, vapor pressure, atmospheric pressure, and air temperature influence the amount of natural evaporation in different geographical regions.

Evaporation occurs over the surfaces of the water bodies such as oceans, streams, and lakes. It can also occur on raindrops, rocks, snow, soil or vegetation. When evaporation happens, anything present in the water such as salts and minerals is left behind. Thus, evaporation purifies the water.

Condensation is the process whereby the water vapor changes from its gaseous physical state to liquid or crystal solid. The water vapor condenses on minute air particles due to the cooling of the air, freezing temperatures or increased vapor amounts to the point of saturation in the upper stratospheres. The condensed vapor then forms clouds.

These are high clouds that are freely spaced in the form of white and flimsy filaments. They are mostly made up of narrow bands or white patches and might have fibers and at times silky sheen visual aspects. Cirrus clouds are at all times made of ice crystals and their transparent nature depends on the degree of the crystals saturation.

Most of the time, when the cirrus clouds cross the sun’s disk their brightness stays for relatively long durations. Cirrus clouds are mostly red or bright yellow before sunrise and after sunset. They are lit up earlier than other clouds and takes a longer time to disappear.

These are high clouds with thin sheets and white patches, or superimposed clouds without any shading. Cirrocumulus clouds are made up of very small components in the form of somewhat regularly arranged ripples.

Ordinarily, cirrocumulus represents a corrupted state of cirrostratus and cirrus clouds of which may change into them later. They are also the most uncommon clouds and they contain ice crystals since they are high altitude clouds.

Cirrostratus clouds are high transparent and whitish veil clouds with hair-like and smooth appearance. Cirrostratus clouds often form in sheets and are broad in scope which means they usually end up covering the entire sky. Because they are high clouds, they occasionally contain ice crystals.

Altocumulus clouds are mid clouds of white and sometimes gray patches or both. They contain layered sheets and are in most cases composed of plates in the form of rounded masses. Sometimes altocumulus clouds are partly fibrous. A corona appears when a narrow semitransparent patch or edge of altocumulus passes in front of the moon or sun.

The corona usually exhibit a red color on the outside and blue color in the inside and it takes place within a few degrees of the moon or sun. Predominantly, it occurs with several other clouds in layers and appears at different levels.

Altostratus clouds are in the category of mid clouds. They appear bluish or gray in layers of fibers (hair-like shapes) or in sheets. They may partially or completely cover the sky and they are adequately thin to often reveal the sun’s brightness as if seen through semitransparent glass.

However, they do not produce a halo effect. At times virga is seen suspending from altostratus and it may sometimes reach the ground inducing very light precipitation.

Nimbostratus clouds are mid clouds and they are ones that bring continuous rains. They occur as a result of the thickening of altostratus. They are dark gray in color and are normally diffused by precipitation such as rain and snow. Nimbostratus are very dense and thick hence, they bring about darkness by blocking away the sun’s brightness from reaching the earth surface.

As precipitation continues, the nimbostratus cloud base lowers towards the ground. Besides, low and furrowed shaped clouds are regularly seen below the nimbostratus which occasionally merges with its base.

Cumulonimbus clouds are categorized as low clouds. They are mainly associated with thunderstorms. They are also heavy and dense clouds in the structure of a mountain with the upper section smoothed, striated and almost always flattened in the shape of an anvil.

The base of this cloud is most of the time very dark coupled with low furrowed shaped clouds that might or might not merge with the base. Cumulonimbus clouds are also associated with precipitations, at times in the form of virga, and can produce tornadoes and hail.

Cumulus clouds are generally detached dense clouds with acute outlines that arise vertically in the form of rising towers or domes with their upper parts bulging to resemble a cauliflower. The bases of these clouds are relatively dark in color and horizontal while the sun lit parts are mostly shining.

Over land, cumulus clouds occur during days with clear skies primarily influence by daytime convection. Typically, they appear in the morning and grow denser as the day progresses then slowly grows less dense as evening approaches. Cumulus clouds are categorized as low clouds.

Stratocumulus clouds are low hanging clouds with whitish or gray patches. They are also layered clouds or in sheets with dark honeycomb appearance as well as rounded masses. Stratocumulus clouds are non-fibrous and might or might not be merged with the base. Also, they have regularly arranged components with an evident width if more than five degrees.

Strati are grouped as low clouds and are generally gray and dark in color with a uniform base. If the base of stratus cloud is thick enough it may produce ice prisms, drizzle, or snow grains. Whenever the layers of stratus clouds break apart a blue sky is seen; and when the sun is visible through the clouds its outline is clearly observable.