Rivers are geographical phenomena where freshwater flows through dry land from one place to another. They also serve as natural drainage systems. Rivers occur naturally in all continents around the world, including Antarctica.

Rivers play quite an important role in daily life and activities of man, as well as the vegetation and resident organisms within and around. Most ancient civilizations were discovered to have been situated along large rivers, which served as an inexhaustible source of fresh drinking water and also a means of transportation between destinations. Such civilizations include; Rome, India, China, and Egypt.

Every river has its distinguishing feature, as well as similarities. For one, they all flow downhill with regards to the law of gravity (they do so at either a high or low speed depending on slope, wind and water current). Every river has its source (river origin which includes streams, springs, and others) and mouth (drains like; sea, ocean, lake, another larger river, or a dessert).

The elevation of a river’s source and its mouth are factors that determine its size and speed. The Amazon River is one example, as it is the largest river worldwide (recorded to discharge up to 55 million gallons of water every second) and one of the fastest flowing. its source is the high Andres Mountains of Peru and drains into the Atlantic Ocean.

Many rivers tend to have several sources including lakes, snow, smaller streams, brooks, and glaciers. Some large rivers even have their source from multiple smaller rivers convergence. One of such is Ohio River, getting its source from the confluence of Monongahela and Allegheny rivers. Rivers can be characterized by their length, width, speed, and location.

Over 165 large rivers as well as thousands of small ones exist in the world currently. The longest of these is the River Nile, located in the Middle East stretching over 4,100 miles. The shortest is the Roe River, located in central Montana stretching over 200 feet. Some people assume that all rivers run from north to south or towards the equator, this is a misconception as some rivers flow east to west and vice versa.

Some major types of rivers include; 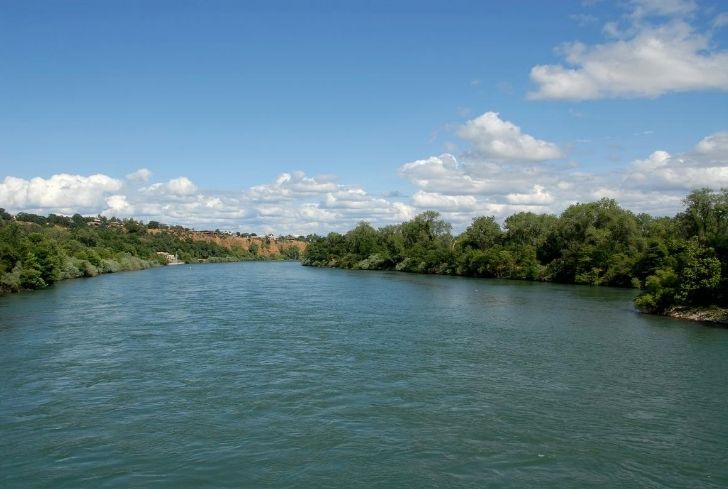 A perennial river is also called a permanent river. This means that it never runs dry but continues to flow all through the year. The height and flow-rate of a river are influenced by seasonal change ( heavy rains or long drought). Perennial rivers most often have stable sources that ensure their continuous flow.

We find that most at times, Perennial rivers are dammed to restrict their flow, create reservoirs, serve as hydroelectric plants, irrigation, and also improve navigation. The first known dam ever built can be traced back to ancient Mesopotamia around 3,000 BC.

Sadly, the flow-rate and depths of some of the world’s perennial rivers have been decreasing in the last couple of decades. This is due to climatic factors and the increasing manipulation of the rivers by man for commercial and industrial use, as well as irrigation. 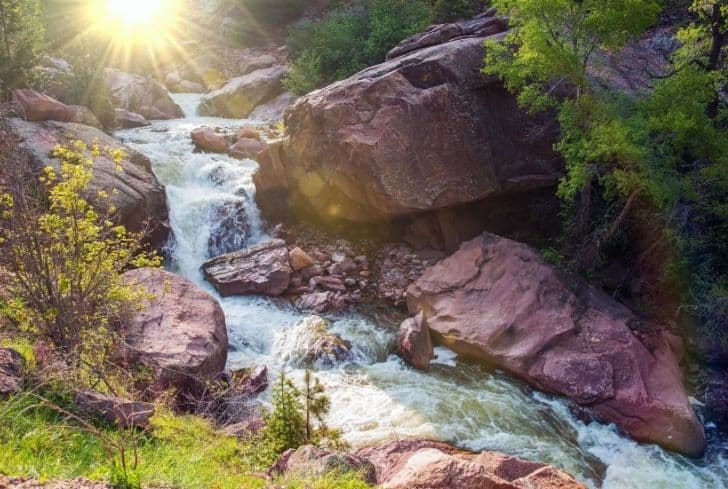 Periodic rivers are also known as intermittent rivers. Rivers that do not flow throughout the year but at intervals. Generally speaking, they may only flow from one quarter to three-quarters of the year, and often just for a few days at a time.

Periodic rivers usually have well-established banks and beds, and at times have water beneath them. Their beds remain dry until a significant amount of rain or melted snow increases the amount of water, either at the source of the groundwater under them.

Periodic rivers tend to have a predictable seasonal flow that remains the same throughout the years. They at times have water pools within their banks even when the rivers don’t flow.

Periodic rivers may be very short or quite long. One of such is the Ugab River in Southern Africa; it stretches up to 310 miles in length. These rivers have increased in count over the period fifty years as a result of environmental and human factors (such as climate change, human manipulation of perennial rivers, and a host of other). 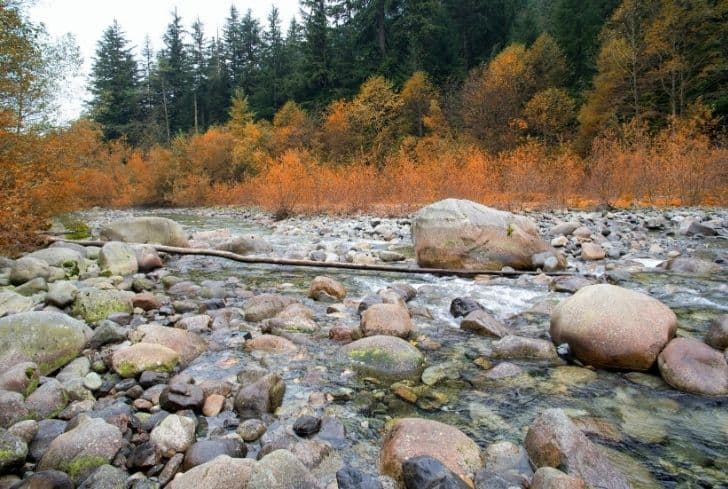 Episodic rivers only flow after a particular event (or episode as the name implies). These events may include; heavy rains, early snow melts and expanded river runoff channels. They can be either perennial and periodic rivers in the sense that they do not have a stable source, groundwater, and are very much depend on climate conditions for their water.

Although Episodic rivers can flow for short periods in a year, they are commonly known to remain dry for years and or even decades at a time. One example of such is the Nossob River in the Kalahari region of Southern Africa over 450-mile long. It has not been seen to have significant flow since the late 1980s. 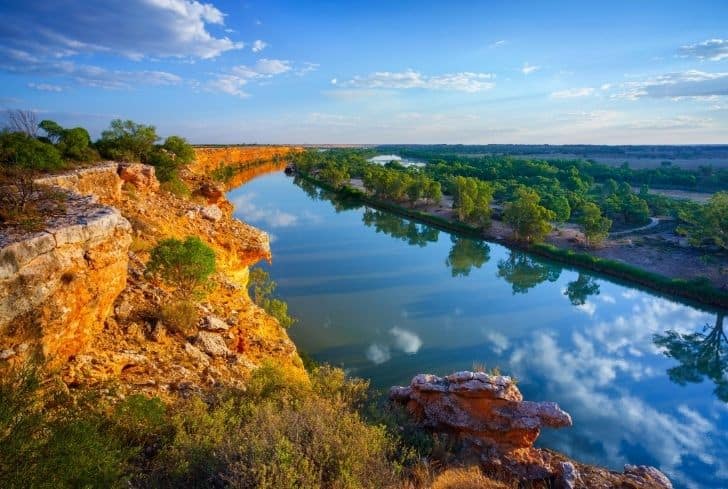 Exotic rivers are rivers that flow through dry environments where little or no freshwater exists. These rivers, source from humid or mountainous areas and flow through extremely arid regions (desert). Exotic rivers may either be perennial or periodic rivers.

Exotic rivers have also played crucial roles in some of the world’s most important civilizations; providing drinking water for man, livestock, and the irrigation of barren lands for food production.

Ancient civilizations Sited along the banks of exotic rivers include Egypt (River Nile), Mesopotamia (Rivers Tigris and the Euphrates), and China (Rivers Huang and Wei). These days, exotic rivers are for transportation and electric power generation via hydroelectric plants. 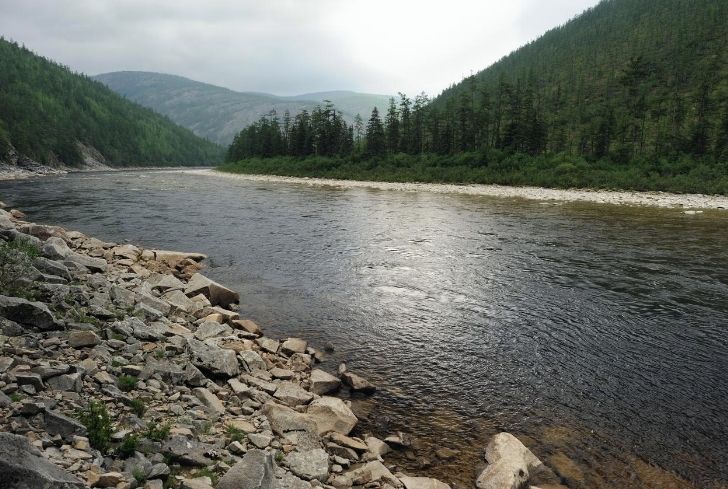 Tributary rivers, also known as affluents. They do not drain into oceans or seas, but rather into lakes or another river. Many major rivers in the world today are tributaries of other rivers.

An example of such is the River Missouri. It is the longest and most powerful river in North America stretching over 2,340 miles. It flows from the Rocky Mountains of Montana to St. Louis, Missouri, where it drains into the Mississippi River; making it a Mississippi tributary. 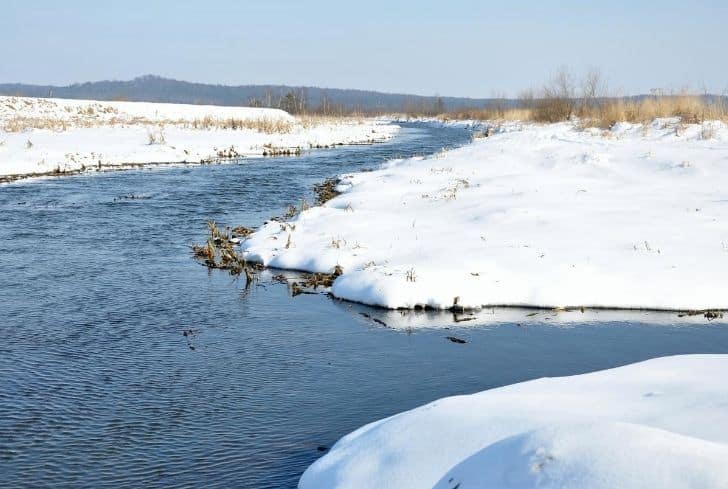 The distributary rivers tend to have steeper grades than their source, which may cause them to flow or drain faster.  Often, these rivers once again meet their mother river in the long run or drain somewhere else. One example is the Atchafalaya River in Louisiana, which is a distributary of the Mississippi. 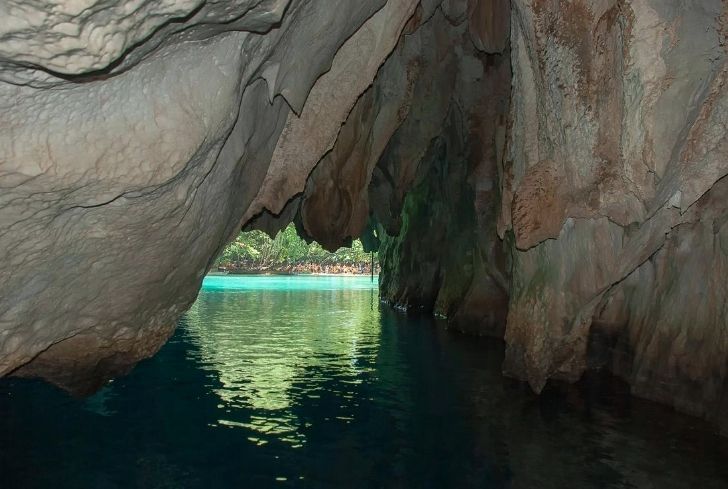 Underground rivers, also called subterranean rivers. These are rivers that have their banks and beds under the earth’s surface. They usually source from an above-ground river and travel a distance beneath the earth through caves. They may disappear into sinkholes to continues their course underground and later appear above ground.

The longest underground river ever recorded is the Sistema Sac Actum, which stretches 95 miles through the Sac Actum cave system in Quinta Roo. Another of such rivers is the Puerto Princesa Subterranean River in the Philippines known to be a popular tourist site. 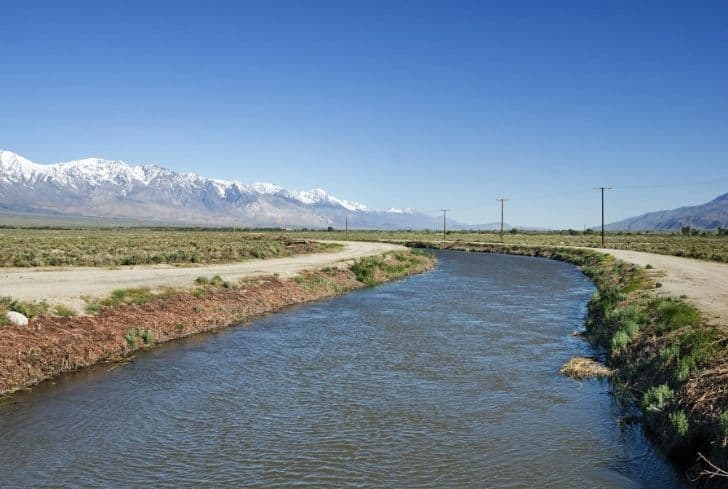 Aqueducts are man-made rivers that carry freshwater from a source (such as a lake, natural river or reservoir) to where ever it’s needed. They are constructed to irrigate large farmlands or supply cities with drinking water. Aqueducts can be found in cities such as; Egypt, India, Rome, China, and South America, and can deliver over 400 million gallons of water per day depending on their scale.

Pipeline rivers though not very common, are manmade structures used to transport fresh water over long distances. One very good example is the Great Pipeline River in Libya. It begins from the Nubian Sandstone Aquifer running underground through the Sahara Desert and covers over 1,700 miles.

It supplies over 1,500 wells along its route and transports over 1.5 billion gallons of water per day for irrigation and drinking purposes. It supplies millions of Libyans in the cities of Tripoli, Sirte, Benghazi, and the surrounding areas, as well as a dozen small towns and villages. 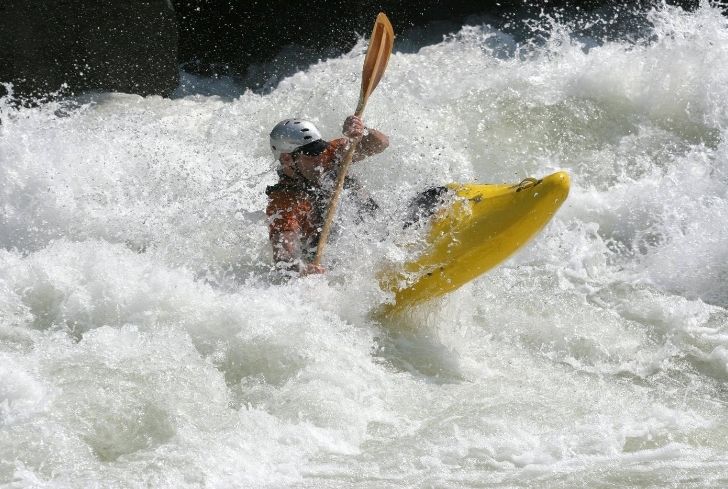 Rapids (Whitewaters) are river sections that flow way faster than other sections due to the steep grades of the river bed. They are formed due to flowing water splashing over rocks along the river bed, causing bubbles to form; turning the river white.

According to the American Whitewater Association rapids are of six-class International Difficulty scales. From Class 1; being mild rapid, and can accommodate strong swimmers, to Class 6; being potentially deadly, imploring the use of rafts.

Rapids of varying severity are found in rivers all over the world, and will often run either continuously or intermittently for many miles. It is not uncommon for a single river to have dozens of stretches of rapids which vary in severity and classification. 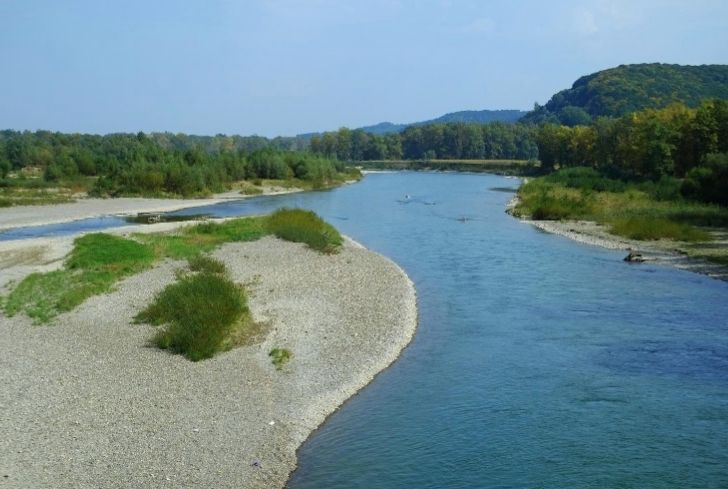 Winding river sections are close opposites of rapids and are usually slow-moving with very gradual downward grade beds. They are mostly seen in plains and lowlands. Winding river sections occur closer to the mouth of a river than to its source where the land levels off as they approach sea level.

Man manipulates the bending rivers by installing dams, sluices, levees, and diversion channels in densely populated and low-lying areas to prevent flooding. And at the same time, they serve business and agricultural purposes. 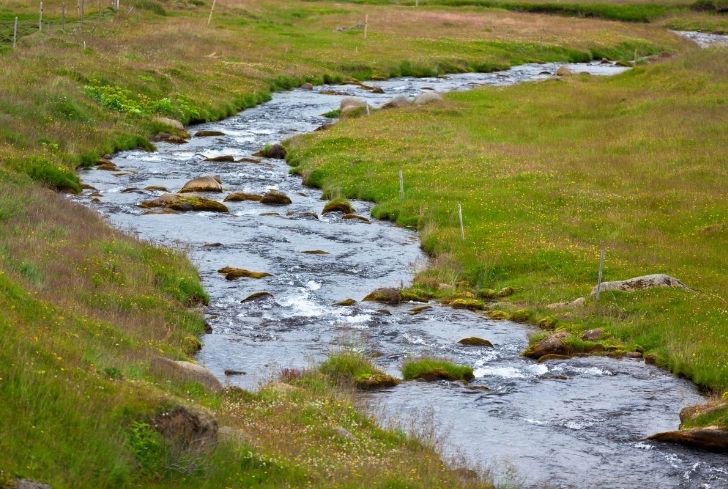 Although there are no standard specific definitions for rivers. Creeks, streams, and brooks are, however, basically referred to as small rivers. These river types could either be perennial, periodic, episodic, tributary, or even distributary, and they also have well-defined banks and beds. At times their confluence may even be a source for a major river.

Creeks, brooks, and streams can be quite small or even very long and may serve as important sources of freshwater. The Australian Billabong Creek (though the longest of its kind) covering over 350 miles serves as a major tributary of the Edward River. Another example is the Lodgepole Creek, in the United States.

An inland waterway may refer to a river, a portion of a river, or the collection of rivers used for the transportation of people and cargo by boat, or other floating vessels.

Inland waterways are wide and deep enough to accommodate the hulls of the vessel, as well as have slow motion. They mustn’t have rapids or waterfalls to prevent damage to vessels.

One example is the inland waterway system in the United States covering over 25,000 miles of rivers and lakes. The largest of which is the Mississippi River System is used extensively for transportation of about a half-billion tons of oil and gas, grain, coal, and other cargo each year.