What is the Panama Canal?

Panama Canal is one of the Seven Wonders of the Modern World and the most famous artificial lock-type waterway that connects the Atlantic and Pacific oceans. In 1513, Spanish explorer Vasco Nunez de Balboa became the first European to discover the Isthmus of Panama, the shortcut that inspired a search for a natural waterway connecting the two oceans. But after that, no serious attempt was made until the 1880s.

In 1881, a French company first started building a canal for ships that can carry cargo between the Atlantic and the Pacific Oceans, involving less distance, cost, and time. Then the US took over the construction, and finally, the canal started operation on August 15, 1914. 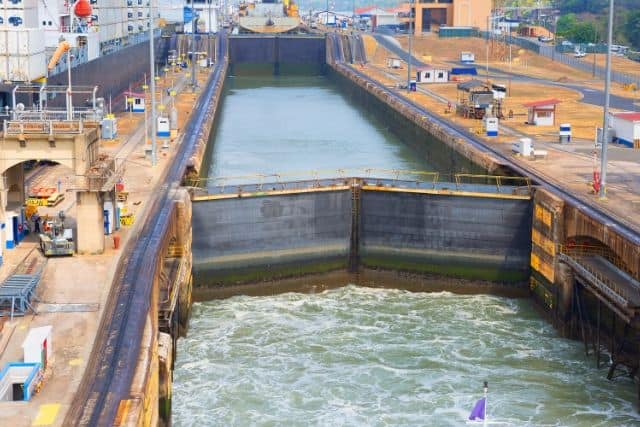 How Does the Panama Canal Work?

It is an 82 km (51 mi) artificial waterway in Panama that passes over the Isthmus of Panama connecting the Atlantic Ocean with the Pacific Ocean. The Isthmus of Panama was a very narrow strip of land between the two oceans where it was easiest to build the canal.

However, it’s a huge and complex engineering project. The canal comprises of artificial lakes, several artificial channels, and three sets of locks. Alajuela Lake, an additional artificial lake, acts as a reservoir for the canal. A number of locks are used on each side to lower and raise ships allowing them to pass between the Atlantic Ocean and the Pacific Ocean.

For traveling through the canal from the Atlantic to the Pacific, the Canal locks lift ships up to, an artificial lake called Gatun Lake, 26 m (85 ft) above sea level, which was created to reduce the amount of excavation work required for the canal, and then lower the ships at the other end. The locks have huge concrete walls and giant steel gates of over 6 feet thick and 60 feet tall. The width of the original locks is 34 m (110 ft) and 1,050 feet long.

A third, wider lane of locks was built between September 2007 and May 2016. On June 26, 2016, the expanded canal began commercial operation. The larger, neo-Panamax ships are allowed due to the new locks and are also capable of handling more cargo.

Surprisingly no pumps are used in the Panama Canal. The entire operation depends on the principles of gravity to move the water and on the fact that water seeks its own level, in equalizing the water levels between the locking chambers. When the water levels of two adjacent chambers are equal, the water stops flowing from the water culverts automatically.

Who Owns the Panama Canal?

France started the construction of the canal in 1881, but the construction stopped due to engineering problems and the mortality rate of the workers. It led to the death of more than 20000 workers due to tropical diseases or accidents. After that, the US took over and resumed work in 1904. It took 10 years and USD 400 million to complete the canal, and it was opened on August 15, 1914.

Now ships can travel between the two oceans in half the time than what required earlier and more safely because of the canal. The US was in charge of the canal and surrounding Panama Canal Zone until 1977 Torrijos–Carter Treaties allowed handover to Panama. In 1999 the Government of Panama took control of the canal, and now the government-owned Panama Canal Authority manages and operates the canal.

Why is the Panama Canal Important?

The Panama Canal was a huge boost to world trade and economy. It is an important canal for international maritime trade. This canal is 82 km (51 mi) long. If there were no Panama Canal, a ship had to travel around the whole continent of South America covering 20,000km or 12,000-mile trip that took 67 days.

Undisputedly, this project is among the largest and the most arduous engineering projects ever undertaken by any country. The shortcut of the Panama Canal greatly reduced the time for ships to travel between the Atlantic and Pacific oceans.

Now it takes between 8 and 10 hours to pass through the Panama Canal, which is otherwise more than twice the time if they had to travel around the southern tip of South America. Besides, it becomes helpful to avoid the long, hazardous route of Cape Horn around the southernmost tip of South America via the Drake Passage or Strait of Magellan and the other less popular route through the Arctic Archipelago and the Bering Strait.

READ:  How Do Rivers Make the Soil Fertile?

However, it can take several days to get through when a ship arrives without a reservation. Since it opened in 1914, the traffic of ships has increased annually from 1,000 to 14,702 in 2008, carrying over 200 million tons of cargo. In the fiscal year 2017, a total of 13,548 vessels passed through the canal, carrying 403.8 million tons of cargo. The vessels, over 1 million, have transited the canal since it opened. At present, 9000 people work for the Panama Canal.

20 Interesting Facts About The Panama Canal

Fact 1: The territory of the Panama Canal was originally Columbian, then French, then American, and finally Panamanian.

Fact 2: This canal crossed 100 years, and 2014 marked the 100th anniversary of the opening of the Panama Canal.

Fact 3: Vasco Nunez de Balboa, a Spanish explorer, was the first person to envision the canal in the 16th century.

Fact 4: During the California gold rush, prospectors in the mid-1800s used this route. They sailed from the Atlantic to Panama, crossed the isthmus either on foot, mules or boat, and took another ship to reach California.

Fact 5: In 1878, Columbia first granted the right to building the canal to a French adventurer named Lucien Napoleon Bonaparte Wyse.

Fact 6: The French adventurer sold the rights to a French company headed by Ferdinand de Lesseps, a former diplomat who developed the Suez Canal of Egypt. The company eventually went bankrupt.

Fact 7: After that, the US gained canal project’s control and decided to build a canal with locks, unlike the French, who had only planned for a sea-level canal. Locks work as water-filled chambers that can be raised and lowered to move ships from one level to the next.

Fact 10: The locks are 110 feet wide and 1050 feet long. Modern ships that are wider or longer than these locks cannot use the Panama Canal.

Fact 11: It takes between 8 and 10 hours to pass through the Panama Canal, which is less than half of what it would take if there would be no Panama Canal.

Fact 12: A dam was built to help provide water for the canal in the 1930s called the Madden Dam.

Fact 13: It costs about USD 400 million to build the canal and a period of ten years.

Fact 14: During construction at one point in time, more than 45,000 people were used to work on the canal.

Fact 15: In 1915, the canal was closed for several months due to a landslide.

Fact 16: Every ship has to pay a toll to cross the canal based on the ship’s size, type, and volume of cargo set by the Panama Canal Authority. If it is a military ship, the toll is based on the weight and Cruise ships pay based on the berths, i.e., the number of passengers in beds. Tolls for the largest cargo ships can be around USD 450,000 but is still cheaper to go all way around South America.

Fact 17: Annually, $2 Billion in Tolls are collected from the Panama Canal.

Fact 20: The Panama Canal may have to undergo significant changes in the near future to accommodate super-sized ships that are being built today such as Maersk’s Triple E class ships, which are the planet’s biggest container ships measuring 194 feet wide and 1,312 feet long, with a capacity of 18,000 20-foot containers. Currently, these will not be able to fit through the canal.