It nurtures American life and boasts a long-standing history and numerous cultural relics – the Mississippi River is regarded as the second-longest river in the U.S. It also serves as the unofficial dividing line between the eastern and western halves of the country.

While all this might be considered general knowledge, the winding waters of the Mighty Miss have many mesmerizing facts that you might not know. Here are 25 of the most amazing facts of the Mississippi River that will stir your curiosity. 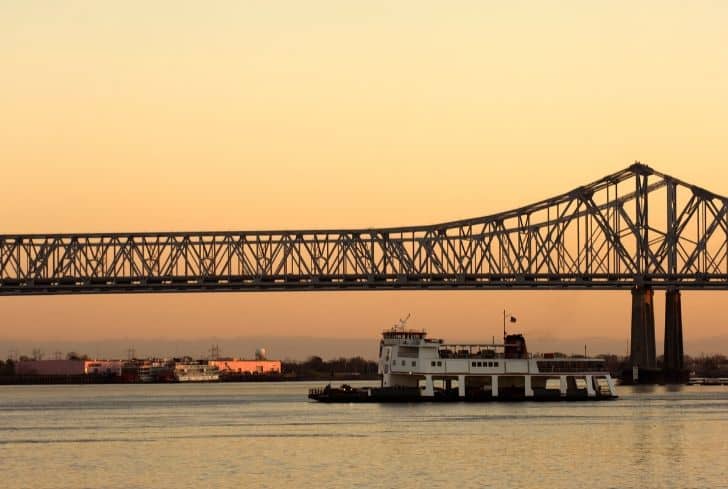 25 Mesmerizing Facts About The Mississippi River

Fact 1: The name comes from an Anishinaabe word

Its name comes from “Misi-ziibi,” an Anishinaabe word meaning “great river”.  Anishinaabe is a group name Odawa, Ojibwe, Potawatomi, Oji-Cree, and Algonquin tribes living in the northern parts of Canada and the United States. The name Mississippi, which we use today, comes from “Messipi” the French rendering of “Misi-ziibi”.

Fact 2: The Mississippi is also called as ‘Father of Waters’

Algonkian-speaking Indians called the river “Mech-e-se-be”, which is translated as “Father of Waters” or “Great Waters”. Robert Cavalier Sieur de La Salle was the first to draw a map calling the ‘Father of Waters,’ the Mississippi River, in 1695.

Fact 3: The French are credited with the first permanent settlement on Mississippi river

Geological studies estimate the Mississippi’s age to be 60,000 years. The earliest inhabitants were Stone-Age hunter-gatherer Native Americans. With radical changes in climate, gradually the tribes replaced their nomadic culture with the settled life of agriculturalists and traders.

Fact 5: Hernando De Soto was the first European to reach the Mississippi

Hernando De Soto, a Spanish explorer, was the first European to reach the Mississippi. Following De Soto’s path, French explorers Louis Jolliet and Jacques Marquette also traveled south down the river in the 17th century. Soon after, the race started between Britain, Spain, and France to settle the river’s shores. However, in 1812, the mighty river officially and permanently became a part of the USA.

Fact 6: Mississippi is the second-longest river in North America

Stretching for 3778 km (2348 mi), the Mississippi is the second-longest river in North America after the Missouri River, which is 3,767 km (2,341 mi) in length.  Meandering through ten states, the Mississippi starts at the glacial Lake Itasca in Minnesota, snakes southward and empties into the Gulf of Mexico, part of the Atlantic Ocean.

Fact 7: It is called the “mother fauna” of North America

The Mississippi River is perhaps the largest and most complex river ecosystem in the Northern Hemisphere, says the U.S. National Park Service. It is home to an amazingly diverse species of fish, birds, amphibians, and mammals: a vast majority of which are native, with the remainder being introduced or migrated species.  Hence the name ‘Mother Fauna’ of North America.

Along its way to the Gulf of Mexico, the Mississippi river touches and borders Louisiana, Mississippi, Arkansas, Tennessee, Kentucky, Missouri, Illinois, Iowa, Wisconsin, and Minnesota states; serves as the present-day water source of 110 counties and 60+ cities. That equates to 18million+ people.

Fact 9: The river is the reason behind the nickname ‘The Bayou State’

The Mississippi state is named after the Mississippi River. But did you know why the state is nicknamed “The Bayou State?” Because of the slow-moving streams that wander through marshes and lowlands along the mighty river.

Fact 10: It is the fourth-longest watershed in the world

With an area of 3.2 million square kilometers, the Mississippi watershed is the largest drainage basin in North America. But did you know that when combined with the Missouri river, it finishes fourth after the Amazon, Nile, and Yangtze Rivers on the list of ‘World’s longest watersheds’?

Fact 11: One of the world’s longest swims

Back in 1930, Fred Newton became the first person to conquer the Mississippi river. It took him about five months to swim the entire length of the river from Minnesota to New Orleans; the historical swim stood for 70 solid years in the Guinness Book of Records as the longest swim. In 2002, Martin Strel, a Slovenian long-distance swimmer took on the Mississippi River and conquered it in 68 days.

Since the river is 2,348 miles long, a single drop of water entering into the Mississippi from Lake Itasca in Northern Minnesota takes 90 days to reach the Gulf of Mexico.  The average speed recorded is 1-mph.

Fact 13: The world’s first floating McDonald’s was on the Mississippi River

Until it was decommissioned in 2000, St. Louis’ floating McDonald’s ruled the banks of the Mighty Mississippi for 20 years.

Fact 14: The longest bridge over water bridge (continuous) is on the Mississippi River

Louisiana’s Lake Pontchartrain Causeway, a 24-mile twin bridge is the world-record holder for the longest bridge stretching continuously over water.

Fact 15: Water skiing was invented on it

On July 22, 1922, Ralph Samuelson, a Minnesotan adventurer strapped two pine boards on his feet and taught the world to water ski. The place was Lake City, Minnesota, on Lake Pepin, a 21-miles long naturally occurring lake on the Mississippi River. The rest, as they say, is history!

Nicknamed ‘The Muddy’, the Mississippi River is not that muddy as it seems; its brown color comes from tannins, the decaying riverside vegetation, and the many hundred million tons of sediment depositing into the river on its journey south.

The muddy waterway and its people have long been an endless source of inspiration for many –  Mark Twain’s infamous memoir, “Life on the Mississippi,”,  George Caleb Bingham’s paintings at the Saint Louis Art Museum and Oscar Hammerstein II’s “Ol’ Man River” to name a few.

Fact 18: The Great River Road is an adventure like no other

Dubbed ‘The Best Drive in America’, The Great River Road, is the National Scenic Byway along the Mississippi River. The 3000 miles from northern Minnesota to the Gulf of Mexico is full of iconic stopovers including the hometown of one of the USA’s most beloved authors, Mark Twain.

Fact 19: The mighty river is humongous, and also tiny

At Lake Itasca, the river’s origin, you can cross it on foot, where it is only 18 inches deep and 20 to 30 feet wide.   The widest stretch of the Mississippi is near Bena, Minnesota where it forms the Lake Winnibigoshish, where it is about 11 miles wide.

READ:  20+ Ocean Facts For Kids That Will Stir Your Curiosity

Flowing backward is nothing new for the Mississippi River. More than once in her history, she has actually flowed backward as a result of earthquake and hurricane; the first time was in 1812 when a massive earthquake hit New Madrid fault in Missouri; the second time during Hurricane Katrina in 2005 and a third time for an incredible 24 hours when Hurricane Isaac slammed into Louisiana.

Fact 21: The Mississippi has seen the world’s most catastrophic floods

Throughout its history, the river has faced its fair share of disasters – hurricanes, tornadoes, floods, and fires. But the most destructive one was when she burst her banks in 145 places. And, what began as unusually heavy rainfall during the summer of 1927 took 250 lives and left 600,000 people homeless.

Fact 22: The Sultana burst into flames along the Mississippi

On April 27, 1865, the United States experienced the deadliest maritime disaster ever in U.S. history. In fact, records say that sinking of the Sultana in the Mississippi river claimed more victims (close to 1,800 Civil War Union soldiers) than the Titanic.

Fact 23: Over $400 billion is the river’s contribution to the US economy

For most of its history, the Mighty Miss served as an important trade route. Today, it powers a significant segment of the economy in the upper Midwest. Directly and indirectly, the river basin represents,

Fact 24: And, the largest tonnage port district is along the Mississippi

Sprawled approx. 54 miles along the Mississippi River delta, the Port of South Louisiana is the largest tonnage port district in the world. It is also one of the largest volume ports in the US; it sees over 500 million tons of shipped goods and 4000+ oceangoing vessels.

The Eads Bride (6442 feet long) is the first bridge to span the Mississippi River at St. Louis, in 1874. This the world’s first steel-truss bridge is also the first bridge,