Right below the lithosphere, there’s yet another layer known as the asthenosphere. This is a weak, hot, and fairly deep part of our Earth’s mantle.

In a way, our lithosphere creates a conductive lid right above the mantle. This, in turn, reduces the transport of heat via Earth. But where is the lithosphere and what are its different types? Keep reading to know more! 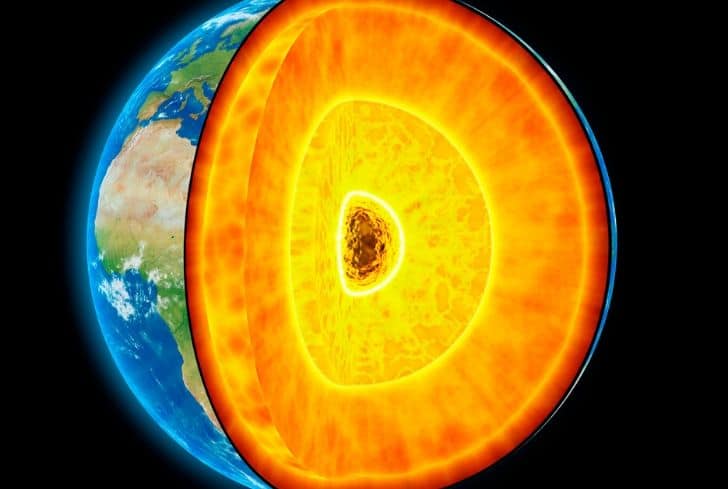 Did you know the term lithosphere was created from a Greek term? Yes, in Greek ‘litho’ refers to rocky and ‘sphaira’ refers to the sphere. Since our earth’s outer layer is but a solid crust, the given name was coined by scientists.

If you thought the lithosphere was a single entity, you’re mistaken. This layer is classified into two types namely, the Oceanic Lithosphere and the Continental Lithosphere. The Oceanic lithosphere is widely associated with our oceans’ crusts and they are found in the basins of oceans. These types of lithosphere usually have a thickness of 50 to 100 km.

Continental lithosphere, on the other hand, is heavily associated with our earth’s continental crust. Their thickness may range from 40 km to a whopping 200 km.

The usual tectonic activities happen at the boundaries of the tectonic plates. As a part of the process, they can tear apart or bump and slide into each other.

READ:  What Causes Seasons and What are Different Seasons?

If you’re wondering how the tectonic plates move, the answer is simple: thermal energy or heat exuded from the mantle makes it possible. The same heat increases the elasticity of the lithospheric rocks.

The most striking part about lithospheric tectonic activities is the fact that it can end up transforming the entire lithosphere. Our oceanic and continental lithospheres have extremely thin rift valleys and small oceanic ridges. The lithospheres are internally and externally shifting each other at these same across these valleys and ridges.

Yes, our oceanic lithosphere is gradually thickening. This is an extensive process that happens due to aging. The lithosphere might also get thicker as it shifts away from our mid-oceanic ridges.

The thickening happens with timely conductive cooling that transforms the hot asthenosphere in a lithospheric mantle, eventually causing the lithosphere to get dense. The more it ages, the denser it becomes.

While the Oceanic lithosphere might be less thick than our asthenosphere for several million years, after meeting a timely threshold, it will get incredibly thicker, often surpassing the asthenosphere.

Fact 8# The Oceanic Plate is the First One to Sink

Every time a continental lithospheric plate collides with the oceanic zone, the latter will always sink below the former. This is perhaps best apparent in a subduction zone.

Fact 9# The Oceanic Plate is Younger

Newer oceanic plates are constantly created at all oceanic ridges. The plates are eventually sent back to the mantle at a subduction zone. That is one of the many reasons why the oceanic plate is much younger than its continental counterpart. While some segments of the continental plate are more than a billion years old, the oldest oceanic plate dates back to (just) 200 million years.

As you already learned in the beginning, the lithosphere is but a solid shell. But do you know why it gets this hard? Well, this is primarily attributed to its flow motion. Due to the low-intensity, extensive stress driving the tectonic motion, our lithosphere becomes a solid shell. It changes only after breaking or brittle failure. The asthenosphere, however, is softened by heat and eventually adjusted by plastic-like changes.

Yes, diamonds are created at Lithosphere’s base, right under the older continental plate that witnesses thinning. Diamonds are created from kimberlite eruptions, and as with most eruptions, they are supremely fast! The magma travels the entire way across the Lithosphere without any halts. The same volcanic sources can also bring lithospheric xenoliths that can be studied to understand more about the lithosphere’s consistency and chemical composition.

Fact 13# Lithosphere and the Other Spheres

The brittle and cool lithosphere is responsible for shaping our Earth’s environment. It does this by interacting with the other spheres, namely- the biosphere (the living things of the earth), the cryosphere (the frozen areas of the earth), the hydrosphere (the liquid water of our earth), and the atmosphere (the layer of air that surrounds our planet). These different spheres collectively interact for influencing diverse elements like the salinity of the ocean, the creation of a landscape, ecological balance, biodiversity, and more.

Fact 14# The Concept of Lithosphere Was First Discussed by A.E.H Love

As with most other discoveries, the discovery of the Lithosphere was made possible by an iconic scientist called A.E.H Love. A mathematician by profession, he first introduced the idea of our earth’s structure having an external layer. This was published in his monograph called ‘Some Problems of Geodynamics’ in the year 1911. So, before 1911 people didn’t even consider the possibility of our earth being surrounded by different layers.

Fact 15# Joseph Barrell and the Lithosphere

While Love introduced the concept of an outer layer, another geologist Joseph Barrell decided to explore it further. After extensive research, he recognized that our continental crust has a solid crust as well as an underlying, semi-molten layer. The semi-solid layer was coined as asthenosphere and the solid crust at the top was called the lithosphere. His theories were based on the idea that there were several gravity-based anomalies on the continental plate of the earth.

Fact 16# Crust, Mantle, and Everything in Between

Our oceanic lithospheric plates are made of crust (mafic) and mantle (ultramafic). The mafic crust contains silicate materials that have high levels of iron, magnesium and a range of other elements. The crust, on the other hand, has Peridotite that contains pyroxene and olivine. Note that it has less than 45% silica.