How Were the Himalayas Formed?

The lofty Himalayas are among the most dramatic and visible creations of plate-tectonic forces. The Himalayas and Tibetan plateau trend east-west and stretch 2,900 km along the border between India and Tibet. The collision of two large landmasses, India and Eurasia, driven by plate movement started the formation of this immense mountain range between 40 and 50 million years ago. 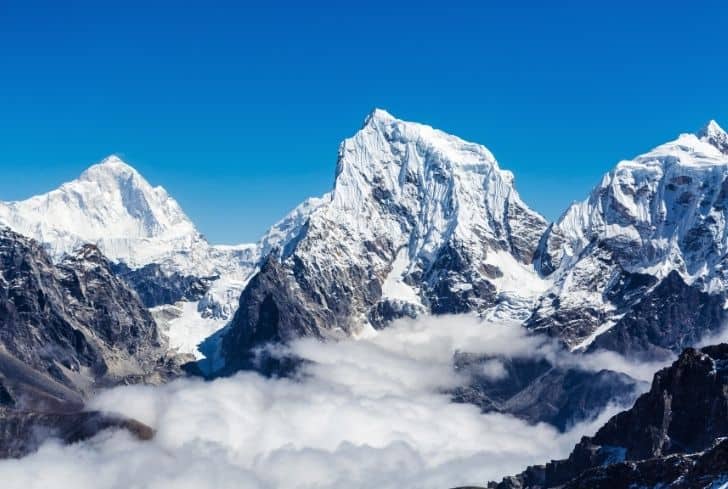 Having the same rock density as plate of one continent could not be subducted under the plate of other continents, the pressure of the impinging plates could only be released by thrusting skyward, contorting the collision zone, and creating the Himalayan peaks.

It was about 225 million years ago when India was a vast island located off the Australian coast and separated from Asia by a vast ocean known as Tethys Ocean. When supercontinent Pangaea broke apart about 200 million years ago, India began to forge northward towards Asia.

About 80 million years ago, the location of India was roughly 6,400 km in the south of the Asian continent, sliding northward at a rate of between 9 and 16 cm per year. It was during this time that the floor of the Tethys Ocean would have been subducting northwards beneath Asia, making the plate margin to be a Convergent oceanic-continental similar to the Andes today.

At present, the movement of India keeps on putting enormous pressure on the Asian continent, and Tibet, in turn, presses on the landmass surrounding it to the north. The result of plate-tectonic forces acting on this geologically complicated region is to squeeze parts of Asia eastward toward the Pacific Ocean.

One serious consequence of these processes is tremendous stress, which is called the deadly “domino” effect, build up within the Earth’s crust. These are relieved by earthquakes periodically along the numerous faults that scar the landscape. This continuing tectonic process caused some of the world’s most destructive earthquakes in history that began around 50 million years ago, the time when the Indian and Eurasian continents first met.

Were the Himalayas Formed by Subduction?

The evidence of the mineral majorite in the rocks of the Himalayas have overturned scientific theory related to the birth of the Earth’s tallest mountains.

The aspects of the collision between Asian and Indian landmasses that formed the Himalayas about 57 million years ago were long debated among Geologists. The collision of continents closed an ocean between them. The Asian plate forced the Indian plate down toward the Earth’s mantle in a process called subduction, which is still connected to the denser ocean crust.

The study, titled “Evidence of former majoritic garnet in Himalayan eclogite points to 200-km-deep subduction of Indian continental crust,” was published in the May 2010 issue of the journal Geology. The principal investigator of the study was Anju Pandey of the National Oceanography Centre in Southampton, England.

A thin section of rocks known as eclogites were examined. The samples that were collected in the Ladakh region of northwest India near Tibet at an altitude of about 15,000 feet contained garnet. The garnets held chemical evidence of majorite that is formed only under extreme pressure at depths of 185 to 200 kilometers. The distance is more than twice previously accepted (90 kilometers) regarding the depth the Indian crust sank during the continental collision.

Eclogites are metamorphic rocks formed in subduction zone complexes in mountain belts at the meeting point of two continents. Minerals found in the eclogites formed by extreme pressure give geologists ideas of the movement and history of the formation of the mountain. As mountains continue to develop, taking millions of years, the eclogites move back up to the surface where geologists can easily access samples.

These findings will change scientific models regarding the age of the mountains radically and also the rate and angle at which the Indian plate continues to collide with the Asian plate while forcing up the Himalayas.

What Was There Before the Himalayas?

When the floor of the Tethys Ocean was completely subducted, the thick sediments on the Indian margin of the ocean were mostly scraped off and accreted onto the Eurasian continent. This is known as an accretionary wedge.

Do the Himalayas Have Volcanoes?

The Eurasian plate was crumpled in part and buckled up above the Indian plate, but because of their low density/high buoyancy, the continental plate could not be subducted. This thickens the continental crust due to folding and faulting by compressional forces pushing up the Himalaya and the Tibetan Plateau.

Oceanic crust is just 5 – 30 km thick. The average thickness if the continental crust here is twice at around 75 km. This thickening of the continental crust marked the end of volcanic activity in the region as magma cannot penetrate this thick crust; therefore, there are no volcanoes, although the magma stays in the crust. Any magma moving upwards would solidify before reaching the surface.

Are the Himalayas Folded Mountains?

The mountain chain of Himalayas is the youngest in the world. During the Permian Period, 250 million years ago, a supercontinent known as Pangaea broke out. Its northern part consisted of current North America and Eurasia (Europe and Asia) known as Laurasia or Angaraland or Laurentia. The southern part of Pangaea consisted of today’s South America, Africa, South India, Australia and Antarctica. This landmass was called Gondwanaland.

There was a long, narrow and shallow sea in between Laurasia and Gondwanaland, known as the Tethys Sea. There were many rivers that were flowing into the Tethys Sea, and sediments brought by these rivers were deposited on the floor of the Tethys Sea.

READ:  Top 13 Highest Picturesque Waterfalls in India That Will Make You Fall in Love With Them

Are the Himalayas Growing or Shrinking?

The mountain range of the Himalaya, of which Everest is part, is to date growing as the Earth’s continents are moving, pushing India further north and the Himalayas even higher. Each year Himalayas are growing about an inch as a result of this process.

The rise of the Himalayas and the Tibetan Plateau to the north occurred very rapidly. The peaks such as Mt. Everest have risen to heights of more than 9 km in just 50 million years. The impinging of the two landmasses has not yet ended. The Himalayas continue to rise more than 1 cm a year with a growth rate of 10 km in a million years!

If that is a fact, the Himalayas should be higher! According to the scientists, the Eurasian plate could now be extending out rather than thrusting up, and such stretching would result in some subsidence due to gravity.

Scientists in India are again ready for an expedition to measure the height of Mount Everest to determine whether a massive magnitude-7.8 earthquake in Nepal in April 2015 really shrank the world’s tallest peak, which is officially 29,029 feet (8,848 meters) tall.

In April 2015, after that earthquake in Nepal, the capital city Kathmandu rose vertically by about 3 feet or 1 m, while satellite imagery suggested Mount Everest became about 1 inch (2.54 centimeters) shorter.

That finding was controversial because conventional theories said that such quakes that shove earth to the surface when two tectonic plates collide should be building mountains. So the new survey may find that the mountain has grown since the last measurement, and any shrinkage due to the quake would be drowned out. Also, given the limits of the measurement accuracy and all the possible unknowns, a new survey may not answer the question of whether Mount Everest shrank.