The Alps are the most populated, highest and most extensive mountain range in Europe. This range of mountains is a collection of great mountain systems of south central Europe, forming an arc some 1200 km (approximately 750 miles) long from the Gulf of Genoa to the Danube River at Vienna.

Furthermore, the Alps are a complex, fold-mountain system. In the ancestral Tethys Sea sedimentary deposits of vast thickness, mainly limestone and dolomite, were laid down during the Triassic and Jurassic periods. Subsequently, enormous pressure generated by a collision between the African and Eurasian plates thrust these rock strata upward and northward to form recumbent folds (known as nappes), which in the process of movement became detached from their roots. 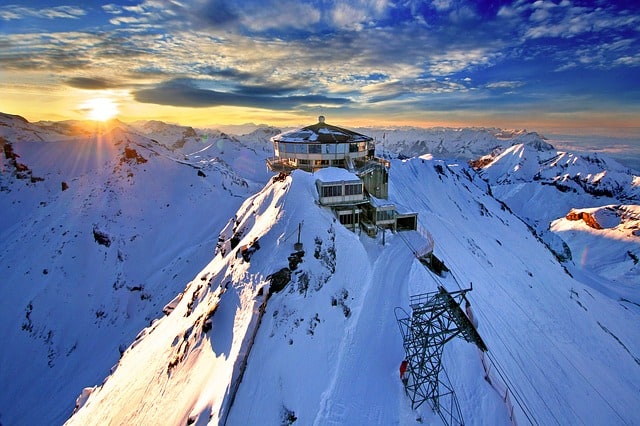 The glaciations of the Quaternary period (beginning about 2.5 million years ago) were of great importance in the making of the Alps. Vast ice masses moved through the valleys, transforming them into deep troughs with steep walls; the overflow of ice across the mountain divides shaped the passes. Glacial deposits in the form of moraines dammed the streams and rivers and produced the region’s many lakes, the two largest of which are Bodensee (Lake of Constance) and Lake Geneva.

The Alps receive a high amount of precipitation on the windward (N) side, about 3000 mm (about 120 in) annually. This precipitation sustains the forests, and the runoff feeds several of the large rivers of Western Europe, such as the Rhine, Rhône, and Po rivers and the tributaries of the Danube (Inn and Drau rivers).

The Alps are the highest and most densely settled mountain belt of Europe, occupying an area of about 200,000 sq km (about 80,000 square miles) and inhabited by some 20 million people. More often than not, annual settlements usually exist on the valleys of Alps Mountain and dwellers make use of the flatter upland tracts which comprises pastures and seasonally inhabited settlements, and the zone above the timberline serves pasture and recreation purposes.

Elevation and exposure to maritime air masses and to the sun’s rays are the prime variables that influence vegetation. Hornbeam, Oak, and pine trees dominate the warm foothill zones. The sheltered valleys opening onto the Upper Italian Lakes abound with subtropical vegetation.

A region of beech forest surrounds the cooler zone and grades at higher elevations into the fir and spruce belt. Mountain maple, spruce, and larch extend to the timberline. The treeless zone of the Alps exist from an altitude of above 1800 m (about 5900 ft), a realm of Alpine tundra and Alpine flora that extends to the permanent snow line and includes rhododendron, edelweiss, rock flora, creeping pine, sedges, rowan and dwarf shrubs.

This zone is very beautiful during the short summer growing season of three to four months. The fauna of the Alps Mountains occupy the solitary heights below the snow line. The dominant species in the alps mountain ranges are the chamois, ibex, woodchuck, snow grouse, snow mouse, and Alpine jackdaw.

Important economic activities peculiar to the Alps mountain range include dairy farming, forestry, production of hydroelectric power, and tourism. With its important pass routes between central and southern Europe, the Alps have been an important area of transit trade since ancient times.

Which Countries Does Alps Pass Through?

The Western Alps are on average about 1000 m (approximately 3300 ft). They are much higher, narrower and more rugged than the Eastern Alps. The Jura Mountains are a northwestern outlier of the French Alps. From Lake Geneva, the Alps mountain ranges curve northeast and become more widely separated, attaining a width of 250 km (155 mi) in the center of the arc.

The ranges of the Eastern Alps separate and finally plunge into the Danubian Basin near Vienna. Popular mountain chains of the Bavarian Alps and the Eastern Alps include: Niedere Tauern in the north and the Dolomite and Carnic Alps in the south, Allgäu Alps and Hohe Tauern.

The following are a collection of phenomenal facts about Alps Mountains.

Fact 2: A mummified body, believed to have been 5000 years old was found in the Alps at the Austrian / Italian border in 1991

Fact 3: The Alps was found to maintain a permanent blanket of snow over 9000ft (approximately 2,750 meters) above sea level

Fact 4: Exotic wildlife and plant forms exist can be found in the Alps. About 13,000 species of vegetation and 30,000 species of wildlife inhabit the Alps mountain ranges.

Fact 5: The Alps can be found in Germany, Austria, Italy, France, Monaco, Slovenia, Liechtenstein, and Switzerland.

Fact 8: The Alps mountain area contains about a hundred peaks higher than 4,000 meters (Approximately 13,123 ft). These are commonly referred to as the ‘four – thousanders’.

Fact 9: Fourteen million people live in the Alps region. The area has been found to attract an average 120 million visitors every year.

Fact 10: Crystals are found throughout much of the Alps mountain region. Such crystals found include:  amethyst, cinnabar and quartz.

Fact 11: Lifestyle in the Alps has significantly improved. This has made the Alps one of the most important tourist destinations in Europe, particularly during winter.

Fact 12: The Alps mountain region has a strong cultural identity. The traditional culture of cheese making, woodworking and farming is not extinct in Alpine villages.

Fact 13: The biggest city in Alps is Grenoble, which is popularly referred to as the Capital City of Alps. About 500,000 local people live in Grenoble

Fact 15: The Alps maintain a permanent snow blanket over 2750 meters (9,000 feet) above sea level, and have many glaciers.

Fact 16: The Alps occupy more than 200 kilometers (125 miles) at their broadest point between Garmisch-Partenkirchen, Germany, and Verona, Italy.

Fact 17: They are geographically important. They represent about 11% of Europe’s total land surface and heavily influence climate.

Fact 18: The Alps are a good source of minerals. Mineral have been mined from the Alps for thousands of years.

Fact 19: The Western Alps are higher, but their central chain is shorter and curved; they are located in France, Switzerland and Italy.

Fact 20: Alps are adorable sites for vacation and recreational purposes

Fact 21: Up to 90% of water supply to lowland areas, particularly arid areas in Europe comes from the Alps, despite the small land area (about 11% of Europe’s total land area) they occupy.