15 Plants That Can Grow Near Rivers and Streams

Rivers and streams, including lakes and ponds, are part of the freshwater biome and are home to diverse plants. The freshwater plants also called “Riparian Plants” are an essential part of freshwater ecosystems that help regulate the delicate ecosystems of rivers and streams by adding oxygen to water, detoxifying it, serving as a source of food, nourishment, and shelter to fish, aquatic animals and wildlife dwelling in surroundings while others are aggressive weeds.

Let’s talk about 15 plants that can grow near rivers and streams. 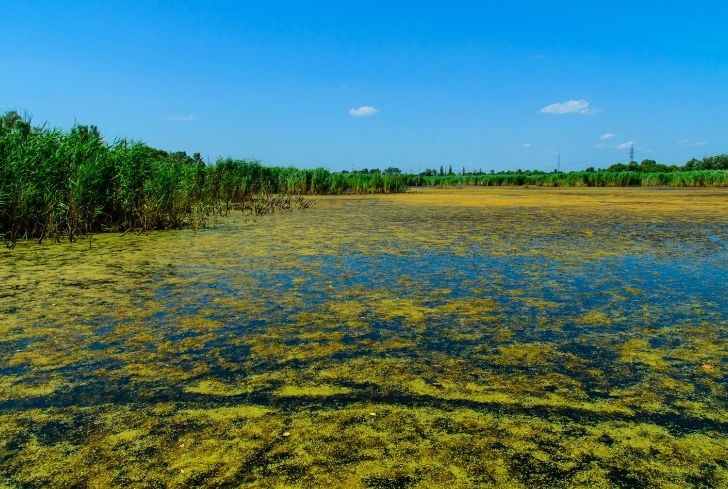 Algae of varied types populate streams and rivers, however, only in specific locations. Generally, it grows up near the middle of the river or stream; when water temperature decreases, the water slows down, and the banks draw farther apart.

It is hardly found near their mouths where water is more transparent and colder and often faster moving. Though algae is a simple plant and provide oxygen to the water, it populates as well as serve as food to animals living in it. 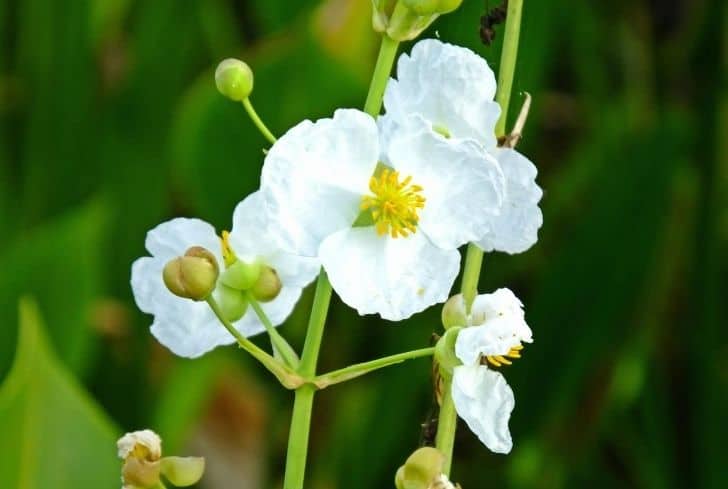 This aquatic plant grows in significant numbers in the shallow edges of the river and streams. The leaves have a distinct arrow form, with two lobes that project backward from the larger forward-pointing main lobe. Arrowhead can grow up to 4 feet and produces flowers that have just three white petals.

Also known as duck potato, it has large edible tubers that occur on the rhizomes that develop under the mud of these plants in the river and stream environs. These arrowhead tubers are a popular food of animals such as muskrats. People can also cook the tubers and eat them. 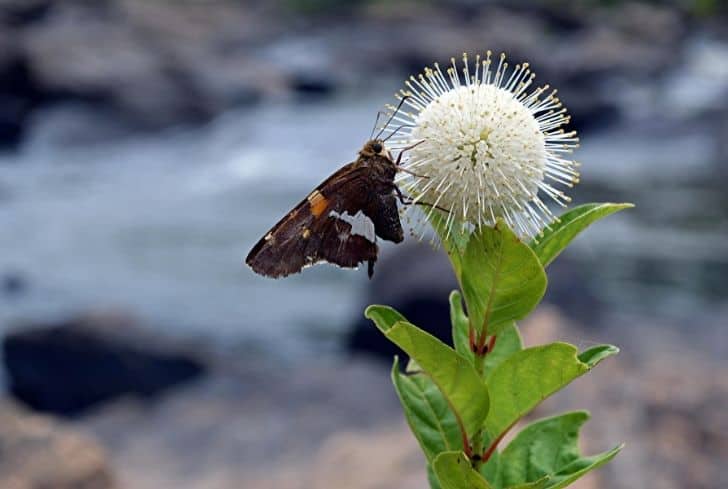 Aquatic trees are adapted to the often-flooded bottomlands near rivers or the wet, marshy banks of streams. Among them, Buttonbush (Cephalanthusoccidentalis) is a deciduous shrub that proliferates along riverbanks and in flood zones.

Black willow (Salix nigra), on the other hand, prefers the moist margins of rivers, streams, ponds, and lakes. Although many plants balk at standing water, these trees readily adapt to it. 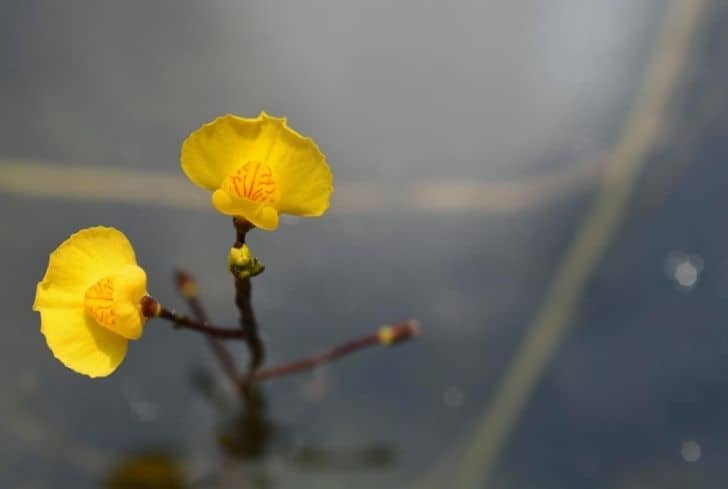 Common bladderwort (Utriculariamacrorhiza) is a rootless carnivorous water plant. Instead of roots, each bladderwort plant has several small bladders that catch and digest small water animals and obtain nutrients.

Utricularia is a Latin word which means “little bag.” Bladderwort features a large stem, from which large yellow or lavender flowers emerge. It grows throughout the hardiness zones. 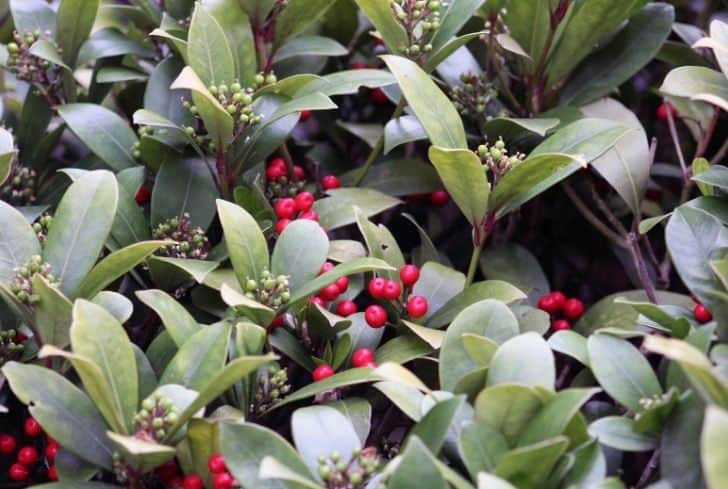 Many wild berry species make the banks of rivers and stream their habitat where the fertile soil that accumulates produces abundant crops. Some of these berries, such as blue elderberry (Sambucusmexicana), are enjoyed by humans too.

These deciduous shrubs grow up to 15 feet or more in height and sport massive cream-colored flower clusters in spring that produce dark blueberries in summer. If you can stop the birds to the berries, they can be used in pies and preserves. 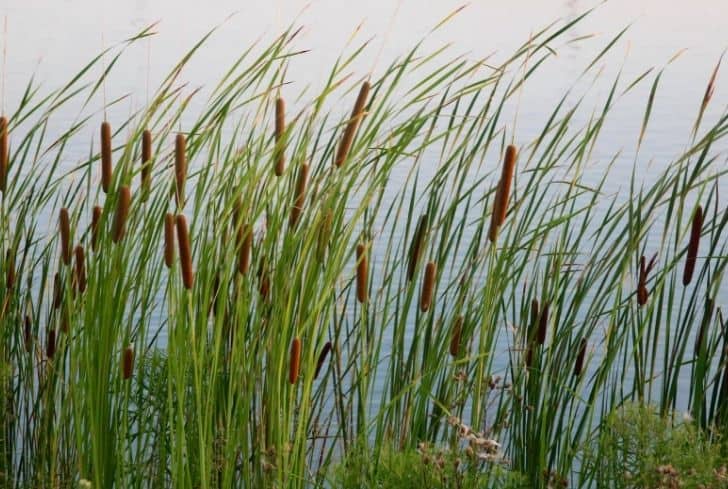 The common cattail (Typalatifolia) is a hardy plant that grows in the backwaters of rivers and streams. The cattails (Typhus spp.) are common in ponds and lakes as well as on the shores of slow-moving streams and rivers. There are also dwarf cattail (Typha minima), called bulrush, miniature cattail, and least cattail.

These primarily grow in shallow waters, and their roots penetrate deep into the moisture and mud. The upper part of a cattail emerges from the water with a sharp, pointy spike and sword-shaped leaves. It may remove pollutants from the water and provides both shelter and nourishment to wildlife. Cattails can also become invasive in many aquatic environments. 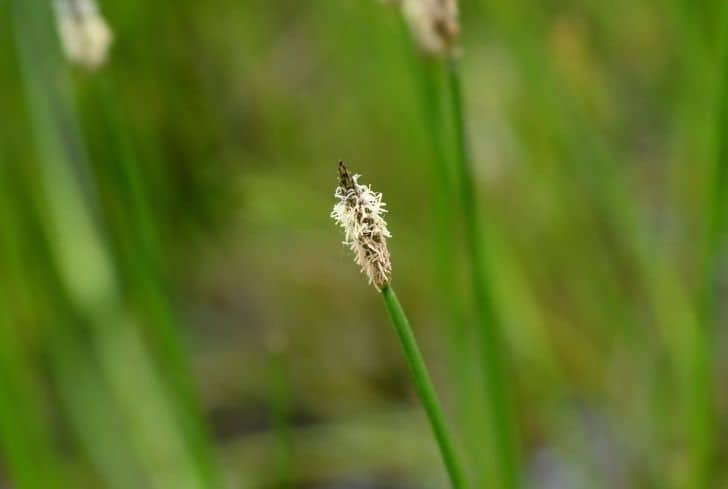 Dwarf spikerush (Eleocharisparvula) is named after its multiple long, spiked stems. Spikerush grows in hardiness zones, primarily along the shallow marshes of rivers and streams. The plant produces neither berries nor flowers but provides a dense habitat for fish. It is frequently transplanted for use in home aquariums.

READ:  Ecosystem - Components and Threats To an Ecosystem 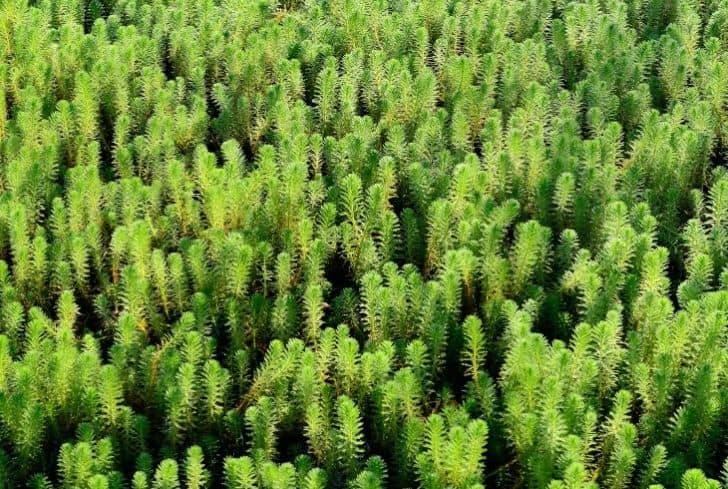 Hydrilla (Hydrillaverticillata), originally from Korea, is an intrusive plant that grows in rivers and streams and also in other water bodies. Hydrilla initially grows horizontally on the bottom of a river or stream and spreads outward, which forms a dense mat.

As it is a noxious plant, it prevents other plants from growing close to them. They have four to eight sets of sharp, pointy leaves. As it flourishes in all zones, hydrilla is on the invasive plant list for which control, as well as eradication efforts, are underway in some states. 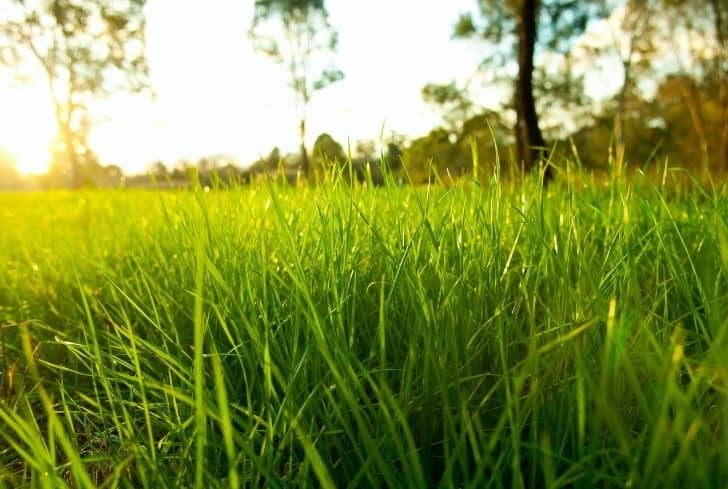 The ample soil moisture along river banks helps many kinds of grass to grow, which would be considered as reeds, rushes, or sedges by botanists. The majority of these plants are spread by underground rhizomes to form extensive colonies.

They not only hold the soil in place but also absorb polluted runoff. However, this plant typically covers to the extent the moisture is available and is nearly impossible to eradicate. 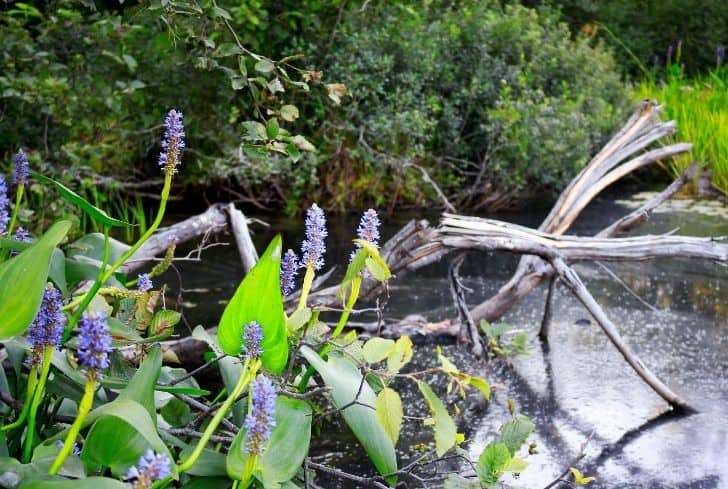 Pickerelweed is a marginal plant that grows in the shallows of rivers and streams. Pickerelweed can grow up to 4 feet high and produces tiny blue flowers on spikes, which rise over foliage shaped like arrows. It grows in colonies along the shore in water deep enough for fish to find shelter in it. The seeds and the young greens are edible. Insects such as damselflies lay their eggs on the plant. 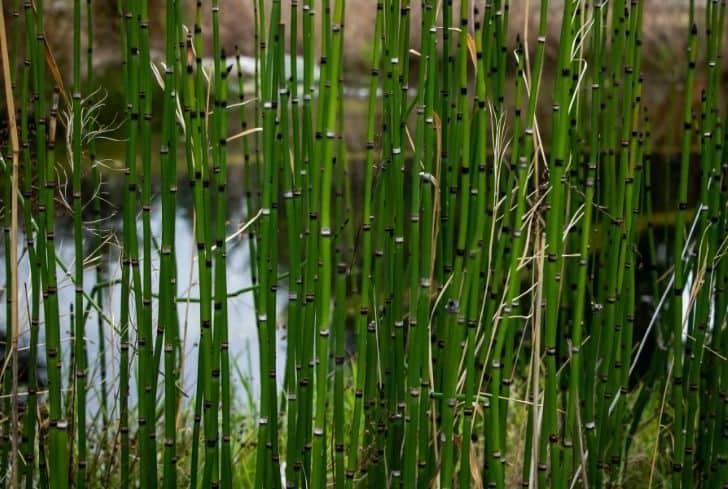 Rushes are quite common in freshwater streams. The winter scouring rush (Equisetum hyemale), also called rough horsetail is commonly found growing on the edges of larger water bodies, including lakes, rivers, and ponds. Except for somewhat better behaved typical rush (Juncus effuses), it can pose a nuisance in smaller water bodies and on home properties as well. 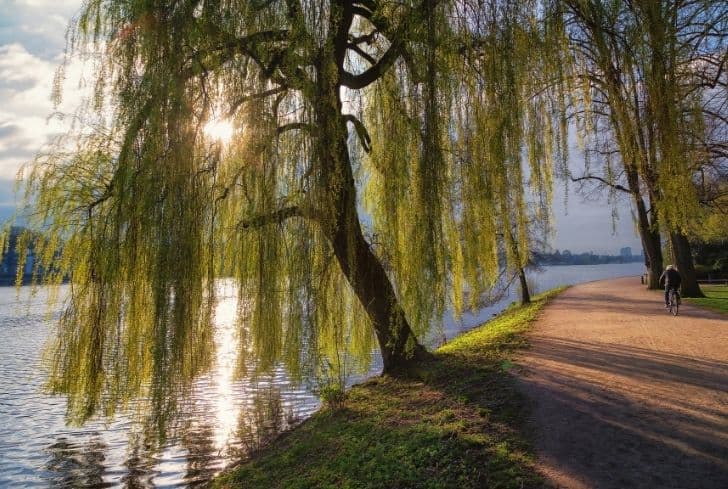 Weeping willow (Salix babylonica), which grows, is a classic example of a riparian tree. These trees live along river banks, and their extensive root systems hold the soil in place while anchoring them to the bank during floods. These are useful for poorly drained areas in the landscape where other tree species cannot survive.

READ:  Do Plants Attract Flies? (And How to Prevent Flies)

However, plant them at least 20 feet away from foundations, driveways, patios, and sidewalks and minimum 50 feet away from septic fields or drain lines so that their water-seeking powerful roots don’t wreak havoc or clog the lines causing costly damage. 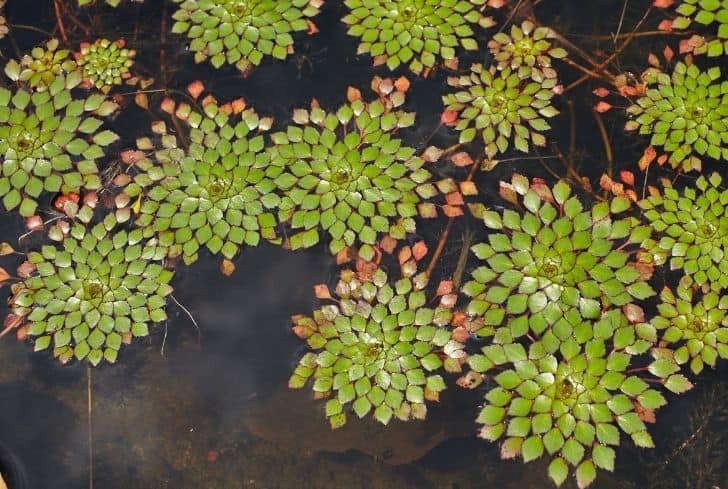 Water chestnut usually grows in sluggish, shallow streams with leaves both above and below the surface. It has triangular foliage that floats on the surface, and the plants can develop stems as long as 16 feet. It is named after the nuts the flowers it produces, which ripen by August and sink into the bottom being capable of sprouting new plants for more than 10 years.

This plant is not a major source of food for wildlife; instead, it can prevent other plants from growing in rivers and streams. Boaters and swimmers consider this species a nuisance. 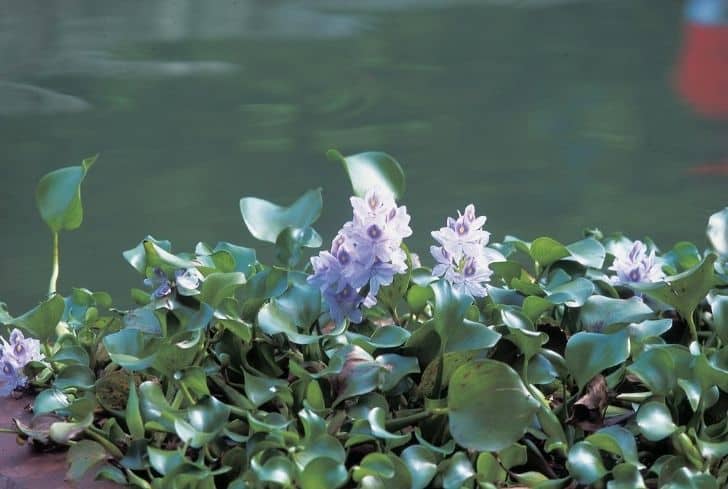 Water hyacinth is a free-floating species of plant, with roots not attached to the bottom. Instead, the roots absorb nutrients right from the water. They look attractive, with a light blue flower.

In river and stream portions that have slow-moving currents, water hyacinth can cause problems. The reason is that it becomes so dense in those areas that it even reduces the oxygen content beneath it, clogging rivers and streams and also making fishing and boating activities difficult. It is said that water hyacinth removes harmful toxins from polluted areas. 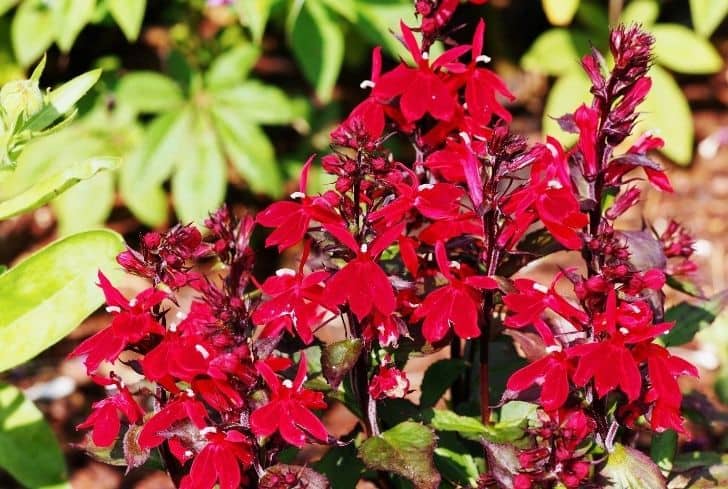 Wildflowers proliferate in a place wherever a little sunlight penetrates through the trees to a riverbank. Riparian wildflowers are full of life, and they offer habitat to many native creatures such as birds, butterflies, and dragonflies, that are all likely to be there as well, for nectar, laying their eggs, and sipping the freshwater.

The cardinal flower (Lobelia cardinalis), also called red lobelia, with intense crimson-colored flower stalks rising above dark green foliage, is one of the most stunning variants of these. This species tolerates sun or shade and grows quickly. 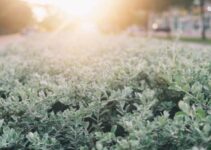 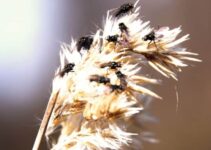 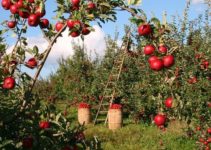