What is a Forest?

Simply defined, a forest is a large group of trees. According to the Food and Agriculture Organization (FAO), a forest is a land with tree crown cover of more than 10 percent and area of at least 0.5 hectares.

Forests cover about 30 percent of the earth’s surface and contain about 3 trillion trees. They exist in dry, wet, freezing cold, and scorching hot climates. A forest ecosystem is a community of organisms living in a forest.

There are different types of forests, categorized largely based on their distance from the equator. And if we understand the importance of forests, then we would know that a treeless world could spell doom for all lifeforms, including humans.

In that light, we look at some of the major benefits of forests. Before that, however, let’s explore the various types of forests. 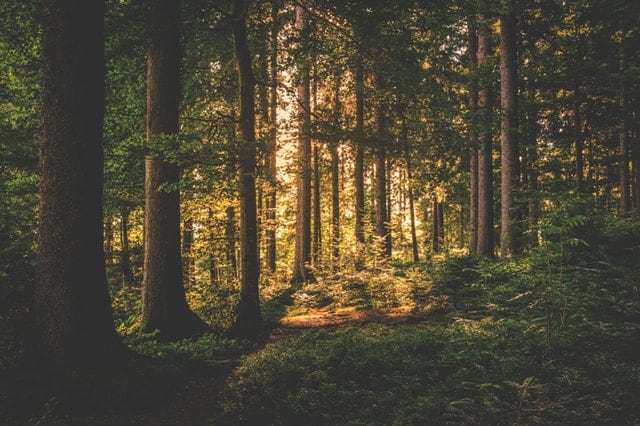 There are broadly three major types of forests – tropical, temperate, and boreal forests. They are classified according to latitude. Also, these major types are divided farther into more specific categories.

Shall we have a detailed look at the major types of forests?

The tropical rainforests are found between latitudes 23.5o N and 23.5o S. The temperatures in these forests range between 68o and 77o Fahrenheit throughout the year.

Tropical rainforests boast the great diversity of species of all ecosystems on earth. They don’t experience winter and normally receive 100 inches of rain annually.

Decomposition happens at an incredibly fast rate in these forests, thanks to the high temperatures and moist air. High levels of rainfall normally result in leaching of nutrients from the soil. This explains why soils in tropical rainforests are nutrient poor.

Tropical rainforests are dominated by broad-leafed trees, which grow between 82 and 115 feet tall. Other vegetation includes vines, ferns, mosses, orchids, and palms.

The sun hardly reaches the lower levels of the forest, thanks to dense-growing trees that create a thick canopy. So, most animals that inhabit tropical rainforests are adapted to living in the trees. You can find a wide variety of birds, snakes, bats, and monkeys in these forests.

Different categories of tropical forests include:

Temperate deciduous forests can be found in China, Japan, Western Europe and parts of Russia, as well as in the Eastern United States and Canada. They experience four distinct seasons and precipitation falls all year long.

Precipitation comes in the form of rain in spring, summer, and fall. It snows in the winter. Temperate deciduous forests receive between 30 and 60 inches of rain annually. And the soils there are very fertile.

You should expect to find ferns, mosses, and wildflowers on the floor of these forests. The forests are dominated largely by oak, maple, and birch trees. You can also find some evergreen trees such as fir and pines in temperate deciduous forests.

Most of the animals that inhabit these forests are adapted to cold winters. Some of the species you will find in temperate deciduous forests include hawks, red fox, cardinals, and woodpecker.

Temperate coniferous forests are characterized by moist climate and a prolonged growing season, thanks to high levels of precipitation. The forests receive between 50 and 200 inches of rain per year. Soils are mostly rich with a thick layer of decaying matter.

These forests are dominated by evergreen conifers. The trees grow very tall. That is credited to the high precipitation levels and moderate temperatures.

You should expect to find trees such as cypress, cedar, pine, Douglas fir, redwood, and spruce in temperate coniferous forests. Some deciduous trees like maple, as well as ferns and mosses,  are also common.

Taiga forests are characterized by short summers and long winters. They receive between 15 and 40 inches of precipitation annually, most of which comes in the form of snow. These forests normally have thin soil, thanks to the cold temperatures that undermine the rate of decomposition.

Trees in Boreal forests are largely evergreen. Examples of the trees include pine, spruce, and fir. The forest floor has limited vegetation, thanks to the dense canopy.

Animals that live in these forests normally have thick fur and are adapted to long, cold winters. You should expect to find animals such as deer, elk, snowshoe hare, caribou, moose, lynxes, wolves, and wolverines.

Now that you know the main types of forests, let’s look at the importance of forests.

The world’s forests play an integral role in not only the wellbeing of their inhabitants but also in the overall health of other lifeforms on the planet, including humans. Some of the major benefits of forests include the following:

READ:  What is Soil, its Importance and What Are Different Layers of Soil

Forests contribute greatly to the Earth’s ability to maintain its climate, thanks to the effects of photosynthesis. They help in averting climate change as they take the greenhouse gas carbon dioxide away from and release oxygen into the environment.

In that way, they help in purifying the atmosphere and controlling the increasing temperatures.

Forests help avert soil erosion by minimizing the force of rainfall on the soil’s surface. They also absorb water, preventing runoff that would otherwise wash topsoil away.

Moreover, forests act as water filters. They collect and store water in addition to replenishing underground aquifers. Forests also enhance the atmosphere’s humidity through perspiration, which affects rainfall and temperature.

No other biome on earth contains a greater range of biodiversity than forests. This explains why it is only a fraction of species found in forests have been studied. A vast range of trees and plants found in tropical forests encompass especially intense biodiversity.

We obtain numerous benefits from forest ecosystems. Many communities around the world survive on vegetation and animals found in the forests.

Most medicines and pharmaceuticals are products of plants that have been derived from forests. Many manufacturing industries get their raw materials from forests, such as wood and paper. Other beneficial forest products include gums, spices, and dyes.

Forests also add to the aesthetics of our environment and promote ecotourism.

Forests are large areas covered in trees and they occupy about a third of the earth’s surface. The benefits of forests to their inhabitants and to the diversity of life are endless. They uphold climate stability, promote biodiversity, and contribute to economic development. And they are the world’s largest storehouses of carbon after oceans. Hence, it imperative that forests are protected from deforestation and other detrimental effects of human civilization.