Ecological pyramid came into existence due to famous scientist such as Charles Elton, G. Evelyn Hutchinson, and Raymond Lindeman. It has numerous names like Eltonian pyramid after Charles Elton, energy pyramid, trophic pyramid, and food pyramid. 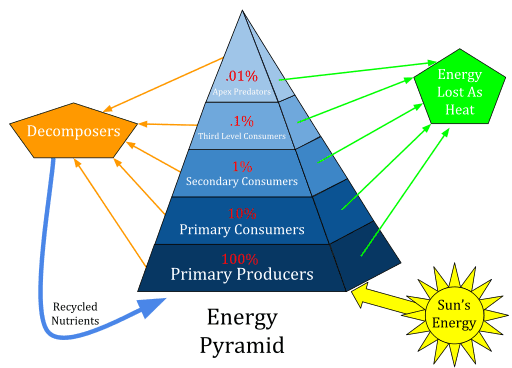 Pyramid of numbers represent the total numbers of individuals(population) present in each trophic level. The term “pyramid of numbers” was first coined by Elton in 1972. This pyramid is quite convenient especially when it comes to counting the number of organisms. Counting is a simple task and it can be done over the years to determine the changes in a specific ecosystem. Nevertheless, some organisms are hard to count, particularly when it comes to young forms.

Pyramid of numbers is divided into two different forms depending on the number of organisms: upright and inverted.

In the Upright pyramid of numbers, the numbers of organisms mostly reduce from bottom to top. It usually occurs in pond and grassland ecosystems where plants occupy the base of the pyramid.  The next levels of the pyramid include the consumers.

An inverted pyramid is actually the opposite of the upright pyramid. It can closely be observed in tree ecosystem, where trees are the producers and insects are the consumers.

The population of higher tropic individuals usually become continuously lower because of food wastage during eating, wastage of food during digestion and finally use of food in the process of respiration and physical activities.

Amongst the three ecosystem pyramids. The pyramid of number is the most incorrect, as it does not take into consideration the exact population. Hence, it cannot completely elaborate on the trophic structure in a system.

This pyramid ignores the biomass of species and it doesn’t show the energy transferred between individual groups.

Pyramids of numbers are not very functional as they do not give a clear or true picture of the food chain.

They do not indicate specifically the absolute effects of the geometric, food chain, size factors of specific organisms.

Before we talk about the pyramid of biomass, lets first know what biomass is. We can define biomass as the amount per unit area product of the living material existing in an individual or a number of individuals at in particular trophic level.

This pyramid indicates the total mass of organisms in a particular trophic level. A pyramid of numbers shows the relationship between the amount of food available and how much energy is being passed at each trophic. Biomass consumed by animals mostly is either converted to living tissue, converted to energy or remain as undigested products.

The pyramid is usually larger at the bottom but as it goes up it reduces in size and becomes smaller. There is always a reduction of biomass with an increase in trophic level.  Approximately 10% to 20% of the biomass is passed from one trophic level to the other.

Just like the pyramids of number, the pyramid of biomass has two forms inverted and upright pyramids.

An example of an upright pyramid is the terrestrial ecosystem. It has a large base mainly consists of primary consumers, the smaller trophic levels are located at the top. So, how do we find biomass? Biomass at a certain trophic level is calculated by multiplying the number of individuals within the trophic level with the average mass of an individual in a particular area.

This pyramid can be used to solve the particular issue in the pyramid of numbers because it shows the exact representation of the amount of energy present in each trophic level. When there is a reduction of biomass with a rise in trophic levels, it signifies wastage and consumption of biomass at every transfer level.

How do we benefit from it? Biomass acts as a source of renewable energy, replacing fossil fuels. Therefore, helping in improving climatic conditions as well as being utilized as fuel reducing wastage and costs.

It also has some limitations, since it’s actually impossible to measure the mass of every single individual. Only a sample is taken, this leads to mistakes. Also, the specific time of the year when data is taken should be put into consideration, since breeding seasons in different organisms differ.

Sometimes biomass can indicate energy value, but it fails to show the amount of energy trapped at each energy level.

Pyramid of energy is an upright pyramid that illustrates the flow of energy from producers to consumers. Furthermore, it indicates the actual role played by various organisms in energy transfer. Energy pyramids indicate how much energy is required in the next trophic level as it flows upwards.

The pattern of energy flow in this pyramid can be described based on the law of thermodynamics which states that energy is neither created nor destroyed it is only transformed from one form into another.

The rate at which food material passes (in form of energy) through the food chain determines how energy pyramids are constructed. Some of the organisms have smaller biomass, but the total energy they take in and pass on is considerably greater than that of organisms with larger biomass.

Energy pyramids are usually slopping because there is less energy being transferred from each trophic level than what was placed into it. If we consider cases such as in open water communities, producers have less bulk biomass than the consumers.  But energy stored and passed on should be greater than the next level.