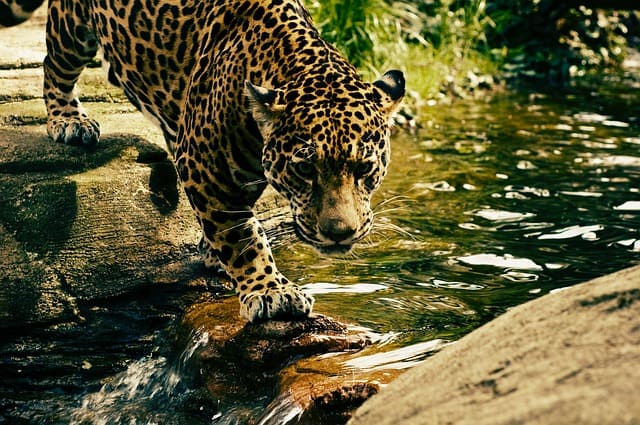 Let’s look at some other examples before we explore the functions of tertiary consumers.

Many organisms, both in terrestrial and aquatic ecosystems, are considered to be tertiary consumers. Here are some of them:

Humans are largely omnivorous. They eat both plants and animals. Moreover, they have a wide-ranging diet and hence consume foods from virtually all trophic levels. We even consume decomposers such as mushrooms.

If you choose to be a vegetarian, you would be considered to be a primary consumer, thanks to the fact that you only consume plant materials. But if you also choose to eat chicken that only feeds on grain, you would fit in the secondary consumer category.

However, if the chicken also feeds on insects, then you would be a tertiary consumer. In light of the fact that humans can kill any animal using weapons, they are of considered as apex predators.

Lions, tigers, leopards and other big cats are classed as tertiary consumers. Except for the leopard, the big cats are also apex predators. While the cats have no predators in their natural habitat, leopard is sometimes predated by lions and tigers.

The big cats exhibit various characteristics of apex predators, including:

Big cats feed on animals from all trophic levels below them. These animals include herbivores that stay in herds such as zebras, wildebeest, and buffalo. Secondary consumers such as hyenas and foxes are also part of their menu.

Furthermore, the big cats sometimes feed on large animals such as crocodiles. They prey on crocodiles when on land because crocodiles have an upper hand when in the water and may attack the big cats instead.

The polar bear is the leading predator in the Arctic. It is a tertiary predator in light of the fact that it kills fish, seals, and penguins.

However, if a polar bear consumes a seal that has eaten a penguin that has eaten a fish, it may not be considered a tertiary predator. This is because several trophic levels have been passed in the process. Nonetheless, this complexity is normally ignored and polar bears are classed as tertiary and apex predators.

Secretary birds are renowned snake hunters. They hunt, kill, and consume various reptiles and small mammals. In fact, venomous snakes such as adders and cobras are their favorite meal.

Adult secretary birds are endowed with exceptionally strong legs, which can break your bones with a single strike. This powerful weapon makes this bird virtually invincible.

Secretary birds are apex predators, but their chicks could be eaten.

Crocodiles rule the waters. They are exceptionally powerful when in the water. They are one of the animals with the strongest jaws in the animal kingdom.

That means they boast one of the most powerful bites. Even the big cats such as tigers and lion can’t beat crocodiles if they enter the water.

Pythons can effortlessly kill wildcats and foxes. But they would have a hard time beating predators such as big cats and adult crocodiles.

These giant snakes can also kill young big cats and crocodiles. Anacondas normally prey on caimans, which are much smaller than crocodiles.

7. Other Examples of Marine Tertiary Consumers

Marine ecosystems also have a substantial share of tertiary consumers. Phytoplankton, the primary producers in the aquatic environment are normally fed upon by microscopic organisms knows as zooplankton. Hence, the numerous animals that consume the zooplankton are secondary consumers.

These animals include fish, crustaceans, and jellyfish. Tertiary consumers, on the other hand, include:

Some of these organisms are apex predators, such as orca whales and the great white or tiger sharks. Moreover, many seabirds such as shearwaters, penguins, and gulls are tertiary consumers.

In freshwater ecosystems, predatory fish like spike eat smaller fish and other secondary consumers such as snakes, birds, frogs, and small mammals.

At the top trophic level, we normally have tertiary consumers, which are not predated by any other animals. And hence the name Apex Predators.

Nonetheless, energy is expended and is lost as heat as it is passed through every trophic level. This leads to a limited energy in the higher trophic levels. Therefore, it is common to only have four trophic levels. And the tertiary consumer is left to play the ecological role of the apex predator.

Organisms in the topmost trophic levels play an integral role in ecosystems. Besides controlling the population of species at lower trophic levels, they also alter their behavior.

When the population of animals in the lower trophic levels are limited, it eases the pressure of grazing or predation on the trophic levels below them. When this happens, the ecosystem dynamics remain balanced.

Let’s use foxes, hares, and hawks to illustrate this phenomenon. When a population of foxes becomes too large, it would put pressure on the populations of hares. By predating on the foxes, a hawk regulates their populations and hence reduce the number of hares that are eaten by the foxes.

That phenomenon is known as a trophic cascade.