Why Do Animals Attack Humans and Ways to Prevent it?

From bees to elephants, more and more animals are turning on humans. Estimates of animal attack deaths vary year-to-year so it’s difficult to find a concrete global number. Some animal attacks are because us humans do dumb things, while other attacks are purely based on instincts and never because of provoking or specific reasons. Either way, when getting attacked by animals are scary. 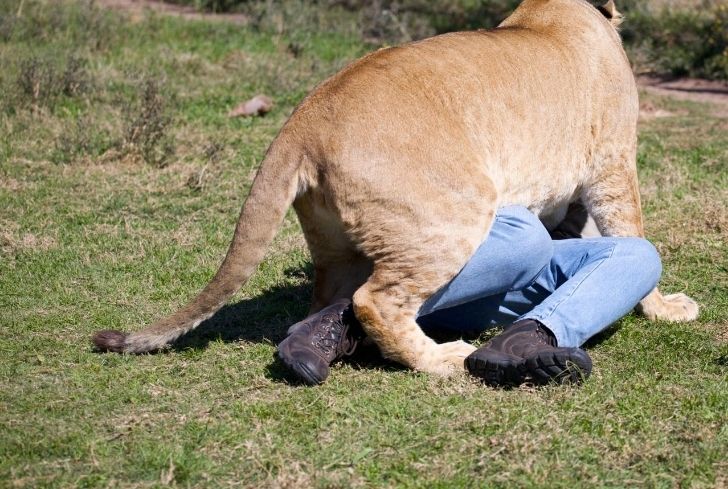 These are just a number of cases out of thousands across the world. The questions that then arise are what’s behind deadly animal attacks? How to stay safe around animals and not be a victim? Read on for a lesson in human-animal conflict.

Reasons For Attack by Animals

Animals will attack humans for a variety of reasons. Knowing ‘why’ can help understand what not to do.

Most animals face the threat of predation. To avoid the risk of being injured or killed, animals employ tactics to fool predators – in some cases that’s us, the humans. In the event those strategies fail, their ‘killing’ instinct kicks in and launches attacks.

Cape Buffaloes (aka Black Death) is the best example. Cape Buffalo is most aggressive when it has been wounded, or if they detect a threat to the young ones in the herd. Lions could attack humans out of fear to defend themselves when they are approached at close range.

When a carnivorous animal attacks a human, wildlife experts often point to the absence of wild prey species. According to a study in the journal Human-Wildlife Interactions, researchers at the Berryman Institute of Utah State University analyzed leopard attacks in and around Binsar Wildlife Sanctuary in India. They concluded that leopards had been forced to kill livestock in that is due to the low population of their natural prey. In certain cases, leopards also become man-eaters.

Sometimes animals attack humans because they have to, or they are forced to. Since time immemorial, humans have attacked wild animals, caged, or killed them. This left animals with a deep-seated fear for humans, and an increased urge to attack if they feel stressed, anxious, or frightened by our mere presence.

Animals are super protective of their young. The animal kingdom has most devoted dads like lions, Arctic wolves, gorillas, and golden jackal and moms like elephants who will stop at nothing to rescue their young ones from harm. And that includes driving away or killing humans.

Due to the population explosion, the world needs to build billions of new homes every year. With increased household demands, it’s inevitable that the human race will continue moving into new places. As we do, we become instrumental in deforestation and threaten wildlife. The result – wild animals hunting people who threaten their home.

A good example is hippos. They kill more people than any other animal. Most of the hippo attacks are out of fear of losing their territory. The chances of deliberate attacks are high especially when humans get between hippos when they are in the shallows, cut off from the safety of deep water.

Over the years, we humans have effectively removed ourselves from the food chain. This is good in one way because we don’t have to go on hunting parties to get food or fight for territories and survival with other animal species as wildlife.

But the downside is that it makes humans easy prey. We’re so unused to being hunted that when things go south, we panic instead of fleeing or fighting and end-up being the prey.

Some studies on tiger attack patterns show that the animals can develop a taste of human blood and flesh after trying it once. That explains a lot about individual tiger attacks in villages and areas close to the forest.

One of the most common reasons behind shark attacks. They often think we’re food because they can’t really see us very well and differentiate from their natural prey. Surfers are more likely to be in danger zone because the surfboard makes them look like a seal, which is the favorite meal of many shark species.

In most cases, humans get attacked for their own fault. Seeing wildlife up close and taking pictures are fascinating. But there’s a huge difference between keeping a safe distance and approaching them closer for a selfie or video. Unfortunately, many people venturing out for wildlife holidays don’t know that. They simply invade animals’ homes and space and get attacked in return. 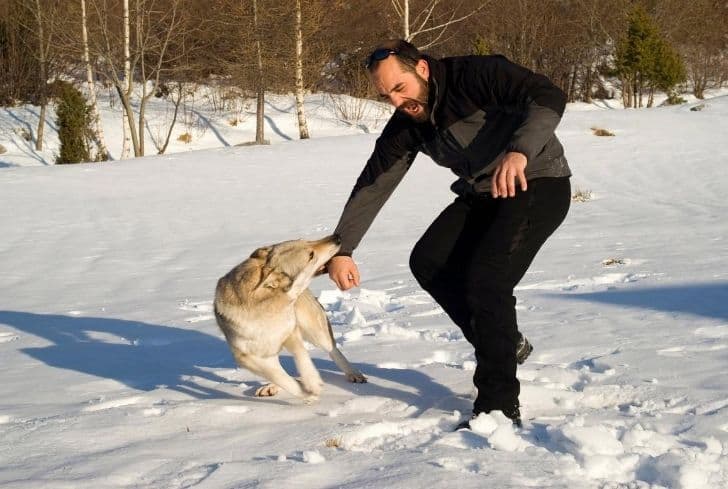 What Can Humans do to Prevent Those Attacks?

Preparation is key to safety in the wild and to escape from animal attacks. Here’s what to do:

It goes without saying that wandering off into the wilderness without some basic research is a strict no-no. Before pursuing the passion for the outdoors, take a bit of time to familiarize yourself with the terrain and the potentially dangerous native animals. It is also important to know the hot spots one should avoid.

Wildlife guides and experts also say that walking into the animals’ world with fear is bad. Today, basic prep is easier than ever, thanks to numerous YouTube videos and guides available. Most national parks have websites listing all info one would need.

Screaming, running or any other form of panic is the worst enemy. When humans do that, animals will consider them either as prey, competition, or something in distress that threaten their life.

Yes, it’s quite impossible to predict how we will behave during a close encounter with a dead animal but keeping a cool body language is important. Most of the time animals do not do any harm until they get stressed or feel threatened.

3. Stay Away Even if an Animal is Friendly

Unless there’s trainer or vet to assist, don’t approach animals even if they are cute, friendly, or seem tame. Most of the wildlife attacks in parks and wildlife sanctuaries reported so far are ‘unexpected’ and from tamed animals. Always remember: avoid close encounters especially when Elephant, Giraffe, Kangaroo, Zebra, or Hippopotamus are involved.

Big cats are known for deliberately stalking their victim. They will follow viable prey until they find the right moment for a kill. They generally don’t attack humans traveling in a group. If found stranded and encounter a big cat do not run; stand tall, never take eyes off the animal, turn the back or crouch down. This will buy you some time.

When exploring or hiking in an area where bears are common, make as many loud noises as possible. They can hear humans before even we see them and they will avoid the source of loud noises. Backpackers and mountain hikers often carry tin cans to keep bears away.

Sprays will dissuade wild animals like bears from getting anywhere close to humans. Bear sprays will make animals’ eye burn and suffocate.

When out camping, keep the area clean. Seal uneaten food in airtight containers and don’t leave food lying around. Never feed animals such as squirrels or deer – it may attract cougars and other predators.

Also, avoid pungent-smelling or raw food as it will lure the wild animals into the camp area which is dangerous. Therefore, always use packed food whenever going for camping.

8. Don’t go out of Your Safari Vehicle

If you are on a wildlife safari, stay in your car or jeep. A major reason for this is that safari animals are used to safari vehicles with tourists. The moment animals see people out of the vehicle, they feel threatened and launch an attack.

Sometimes out of excitement or by seeing the friendly nature of animals, people try to feed them. This can turn out to be a dangerous mistake, especially during wildlife tours. Wildlife experts say feeding animals may hamper their natural instincts of hunting for food.

This is one of the reasons for animal attacks on a wildlife tour. Though guides advice to turn mobile and camera flashlights off, many visitors hardly pay any attention to it. Flashlight scares wild animals and they turn violent and eventually attack visitors.

Most of the wildlife sanctuaries and parks have rules to wear camouflage clothes or neutral colors, especially for walking tours. This is because wearing bright colors may attract animals, and hence, a greater risk of unexpected attacks.

One shouldn’t have a misconception that deadly animal attacks are subjected to predators like big cats and reptiles. The truth is that even a harmless farm animal can also cause fatalities.