What are the Tasmanian Devils?

The Tasmanian devil (Sarcophilus harrisii) is a small marsupial from the Dasyuridae family with ratlike features. It is characterized by its stocky and muscular build, coarse black or brown fur, pungent body odor, a keen sense of smell, and sharp teeth. It is 20 to 31 inches (51 to 79 centimeters) tall and weighs only 9 to 26 lbs. (4 to 12 kilograms). Their front legs are slightly longer than their back legs, and they can cover short distances in 13 km/h (8.1 mph). It may be small but has one of the most powerful bites in the animal world because of its muscular jaw. Tasmanian devils store additional fat in their tails, and healthy ones have fat tails. 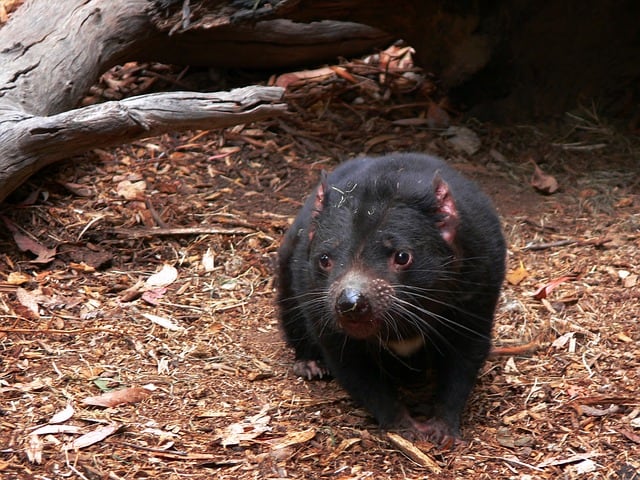 As the Tasmanian devil is a marsupial, female devils have pouches in which they carry their young. With the help of this pouch, the Tasmanian devil mother feeds and protects its newly born devils. The pouch contains four teats for which she can look after four little devils at the same time.

The Tasmanian devil is strictly nocturnal; it sleeps during the day and is awake at night. However, they like to rest in the sun. During the night, they many times travel up to 10 miles (16 km) to hunt, according to the San Diego Zoo. Tasmanian devils may be awkward on the ground, but they are good tree climbers and swimmers.

There is one thing common between cartoon Tasmanian and the real creature: the poor temperament. When devils feel threatened, they make spine-chilling growls, lunges, and bare teeth in a maniacal rage and also make devil-like deafening and disturbing screech. It may be due to this kind of temperament that the Tasmanian devil is a solitary creature.

What Do Tasmanian Devils Eat and Where Do They Live?

The Tasmanian devil is the largest living carnivorous marsupial in the world, according to National Geographic. It is a nocturnal and crepuscular hunter. It spends the days in dense bush or a hole, and it may have become nocturnal to avoid predation by eagles and humans. The devil is found to be most active at dawn and dusk. However, their diet is widely varied and depends on the availability of food.

Tasmanian devils are opportunistic, and feast on dead carcasses called carrion more often instead of hunting live prey. They can take prey up to a small-sized kangaroo, but the devil favors wombats because of the ease of predation and high-fat content. Usually, they feed on all small native mammals like bettong and potoroos, domestic mammals (including sheep), birds, reptiles, fish, tadpoles, frogs, insects, and vegetable matter.

When the thylacine was extant, the Tasmanian devil ate thylacine joeys left alone by their parents in dens while away for hunting. They are also found hunting water rats by the sea and forage on dead fish, which have been washed ashore. Devils even dig to forage corpses.

Devils cannot run down a wallaby or a rabbit because of their relative lack of speed, but they can attack animals that have become slow due to illness. They can sniff flocks of sheep from a distance of 10–15 m (33–49 ft) away and attack when the prey is ill. To defend themselves, the sheep stamp their feet in a show of strength.

Many times while converging on one carcass by many devils, fighting ensues, and they are known for their ferocity when feeding. Tasmanian devils do not waste any part of the animal, be it the bones, hair, organs, and muscle of their prey.

An adult devil of around 10 kg of weight eats up to 1 kg of food per day. The devils can consume up to 40% of their body weights in one go, particularly in the case they are unsure of when they will find their next meal.

The island of Tasmania in Australia, an area of about 35,042 square miles (90,758 square kilometers), including very small east-coast Maria Island where there is a conservation project with disease-free animals, is the prime habitat of the Tasmanian devil.

According to National Geographic, Tasmanian devils can live anywhere on the island like a wilderness area, National Parks, forest, farmland, and coastlines; however, they prefer coastal scrublands and forests. Despite the area of the island they inhabit, they sleep under rocks or in caves, logs, or burrows.

Why Are Tasmanian Devils Endangered?

The Tasmanian Threatened Species Protection Act 1995 and the Australian Environment Protection and Biodiversity Conservation Act 1999 listed the species as vulnerable in 2005 and in 2006. It implies that in the “medium-term,” the Tasmanian devil is at risk of extinction.

The International Union for Conservation of Nature’s Red List of Threatened Species (IUCN) classified the Tasmanian devil in the category of lower risk/least concern in 1996. However, in 2009 they reclassified it as endangered as their numbers were declining. The IUCN estimated that the population might have been around 25,000 adults.

The devils, which were initially seen as implacably vicious, were also seen as a threat to livestock by the farmers and the animals that are hunted by humans for fur. That is why they were hunted and became endangered in Tasmania. In the late 1800s, the efforts to eradicate Tasmanian devils were nearly successful. Since 1941, they have been officially protected by the government. Thankfully, their numbers have grown steadily since then.

While the thylacine was existing, it preyed on the devil as they used to target young and unattended thylacine cubs in their dens. It may have expedited the extinction of the thylacine.

In the mid-1990s, a catastrophic illness discovered that killed tens of thousands of Tasmanian devils. It is cancer called devil facial tumor disease (DFTD) that has drastically reduced the Tasmanian devil’s population since the late 1990s, and by at least 60 percent since 2001.

DFTD causes tumors or large lumps to form around the facial area and head of the creature, making it very difficult for them to eat. Eventually, the animal starves to death. It is rapidly spreading and a rare contagious cancer threatening the survival of the species, which was declared to be endangered in 2008.

Localized populations of devils have also been severely reduced by collisions with motor vehicles, mainly when they are busy eating roadkill. 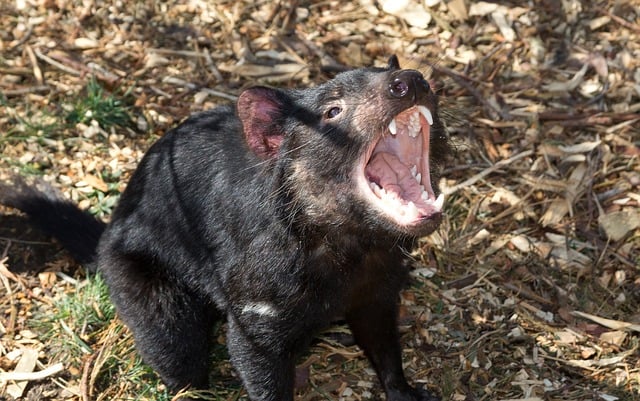 Solutions to Save the Endangered Tasmanian Devils

The Tasmanian devil is not only the iconic symbol of Tasmania but also the logo of many reputed products, groups, and organizations of the state. It is used as the emblem of the Tasmanian National Parks and Wildlife Service. They attracted the worldwide attention of tourists to visit Tasmania through the Looney Tunes character of the identical name.

READ:  35+ Extraordinary Facts About Sea Turtles That You May Not Know About

From the year 2013, Tasmanian devils were sent to zoos worldwide as part of the Australian government’s Save the Tasmanian Devil Program. Zoos Victoria, through Healesville Sanctuary, is a partner in this program. They aim to breed and manage a maximum of 50 Devils as part of the long-term insurance program.

In 2013, 2015 and 2017, devils were released from Healesville to locations like Maria Island and the Tasman Peninsula that are free of the tumor disease. Zoos Victoria also helps with monitoring animals and conducting research in the wild, in the lab, and in the captive program.

It includes taking an initiative to conserve a group of healthy devils in captivity, isolated from the deadly DFTD. Savage River National Park in North West Tasmania has been extending its valuable support as wildlife refuges and providing hope for their existence and survival.

Animal health experts are resorting to sequestration to safeguard the devil populations where DFTD has not yet found. They are also focusing on captive breeding programs to help protect the species from extinction.

Developing Awareness Against the Culling of Animals

Devils are not dangerous. Despite attacking people, they rather defend themselves if they are attacked or trapped. Devils may look fierce, but they prefer escaping than fight.

Scientists have argued that earlier beliefs that the Tasmanian devils posed significant threat to livestock were not only overestimated but also misplaced.

Tasmanian devils play an essential role in keeping the ecosystem of the state in balance, where they belong to the top of their food chain. So what would happen if the species become extinct? Moreover, they also eat sick and dead animals. They control the population of other predators, such as foxes and feral (wild) cats.