Every year, June 16 is celebrated as the World Sea Turtle Day. But what exactly are turtles? Are they the same as our regular turtles? Sea turtles or marine turtles are reptiles of the order Testudines. These fantastic creatures are under threat due to the dumping of 8 million tonnes of plastic in oceans every year.

Out of the total seven sea turtle species, six are threatened with extinction due to human activities. WWF tracks sea turtles to know more about their movements and routes from feeding to breeding grounds to other activities. As you keep reading, you will learn about 35+ amazing facts of these mysterious and coolest surfers in the sea. 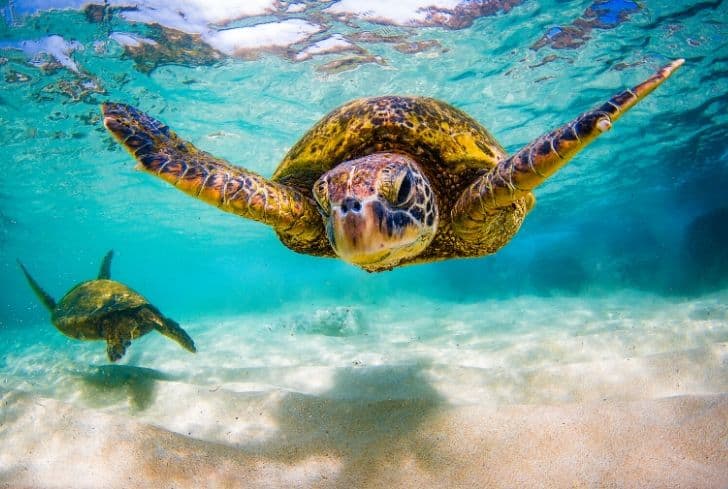 Fact 1: Where do these creatures live?

Sea turtles live in almost every five ocean basin worldwide from the cold waters off California to the Coral Triangle’s warm beaches, nesting on tropical and subtropical beaches except the Arctic Ocean, which is too cold. They can be found mostly in coral reefs. Males never leave the ocean, while females come ashore to lay their eggs on sandy beaches during the nesting season.

Fact 2: Six out of seven species are on the Endangered Species List

Seven species of sea turtles live in waters all around the world, except in the extreme north and south regions. They are flatback, green, hawksbill, Kemp’s Ridley, leatherback, loggerhead, and Olive Ridley. The flatback found only in the area around Australia, and Papua New Guinea is considered vulnerable. Others are on the Endangered Species List of the U.S. Most commonly seen types by divers are the first three.

Fact 3: They are Ancient

The oldest sea turtle fossils found date back to about 150 million years, which means they existed on Earth even around 150 million years ago. This alone makes them one of the oldest beings on our planet. If you’re wondering how old that is, here’s a fact: dinosaurs went on to be extinct almost 65 million years back.

Fact 4: How long they live?

The actual age of any species of sea turtle is challenging to know. We only know that sea turtles live for a long time, and that ranges from 35 to 80 years and can have similar lifespans to humans, although some individuals have exceeded 200 years. Green sea turtles are probably the longest living with an average life span of 80 years. The hawksbill and the flatback have the shortest life span of 35+ years.

Most marine turtles take decades between 20 and 30 years to mature and remain actively reproductive for another 10 years.

Male sea turtle spends his entire life at sea. Unlike females, they don’t have to return to land to lay eggs. Therefore males rarely leave the ocean. The tracking of the population of male sea turtles becomes difficult for this.

Fact 7: They come to the surface to Breathe

Sea turtles are reptiles; therefore, breathe air. And they breathe air into and out of their lungs through their nose and mouth like humans. Every time they need to go to the surface of the water to breathe, but they can hold the breath for several hours, depending on their level of activity.

Fact 8: These creatures are Colorful

READ:  Causes and Effects of Oil Spill on Our Environment

Sea turtles have limbs called flippers adapted for swimming. Moreover, they cannot retract or hide their head and legs inside the shell-like other land turtles.

The Kemp’s Ridley and Olive Ridley are smallest sea turtles that weigh between 66–110 pounds and reach about 55 to 75 centimeters.

The largest of all sea turtles is the leatherback. Mature leatherbacks grow up to 2 m in length and 1 m width and can be as heavy as weighing more than 1000 pounds. The largest recorded was 3 m long and weighed 2,019 pounds.

Fact 12: They Gorge on Jellyfish

Sea turtles and some leatherback turtles thrive on jellyfish for sustaining their population. Since plastic looks like jellyfish at the outset (when it floats in water), several hundreds of these turtles end up dying by ingesting plastic and plastic-like materials. This is all the more why water pollution should be brought in check.

Fact 13: Not all have Hard Shells!

Sea turtles mostly have a hard shell made of more than 50 bones joined together, but the leatherback lacks that hard shell, and instead, it has leathery skin with a mosaic of bony plates underneath. That is why they are called leatherback.

Sea turtles aren’t consumed by the majority of the aquatic predators. That is why they don’t have the necessity of protecting themselves from these creatures. This is also the reason why they don’t have the ability to retract their flippers and their head right inside the shells. Thanks to their anatomy, they are extremely agile in the aquatic environment. They are, however, extremely vulnerable when they breed, nest, and hatch.

Leatherbacks are no less either. They are believed to withstand extreme cold (often dropping below forty-degree Fahrenheit). Unlike the Loggerheads, they prefer living near Chile and Alaska.

Many researchers have observed that the eggs of the female turtle resemble tennis balls. Sadly, they aren’t, so avoid playing with them when you spot them at a beach. The female usually lays 150 eggs in a tiny nest. Over time, some of these eggs are either destroyed by predators or taken away by the waves.

The relative temperature plays a vital role in assessing the sex of the hatchling. At the time of incubation, warm temperature around eighty-five degrees Fahrenheit or higher will result in female hatchlings and vice versa. The balance needs to be delicate, as excessively high temperatures might end up destroying the eggs.

It is worth noting that the kind of sand used for building nests has a role to play in sex determination. As per a study conducted in 2013, sand beaches that are more lightly colored result in around 70% females, while dark-colored sand (the ones that strongly absorb heat) result in more females around 90% or higher.

Fact 18: They Have Varying Sizes

One of the defining aspects of sea turtles lies in their size. Unlike other creatures, their size tends to vary, as per their species. For instance, Kemp’s Ridley has been deemed the smallest specie and it barely weighs around eighty to a hundred pounds. The massive leatherback, on the other hand, can weigh up to a whopping thousand pounds.

READ:  Why Do White Rabbits Have Red Eyes? (Albinism)

If you didn’t already know, sea turtles are but a type of marine reptiles. It is worth noting that our planet has only a few marine reptiles. Almost twelve thousand among them are extant and another hundred remain scattered in various marine habitats.

Along with sea turtles, crocodiles and sea snakes belong to this exclusive group of marine reptiles.

The female turtle lays plenty of eggs every season between two to five years. After two months, the baby turtles or hatchlings, head out from their nests (which is often near the bay) and start moving toward the ocean.

At the juvenile stage, these turtles spend their years in an open ocean. Over time, they shift to estuaries and bays.

Fact 21: Varied Seafood is the Diet

Greens are primarily herbivores, therefore eat seagrass and algae. Leatherbacks have stiff spines in their throats and feed on slippery prey like jellyfish and soft-bodied animals. Loggerheads eat heavy-shelled crustacean animals such as crabs and clams; hawksbills eat sea sponges, and other invertebrates and the Kemp’s Ridley prefers crabs.

Sea turtles can hold their breath for a very long time and remain submerged for hours as long as up to 7 hours. Green sea turtles can stay up to five hours underwater. Some turtles hibernate in colder water temperatures for several months. 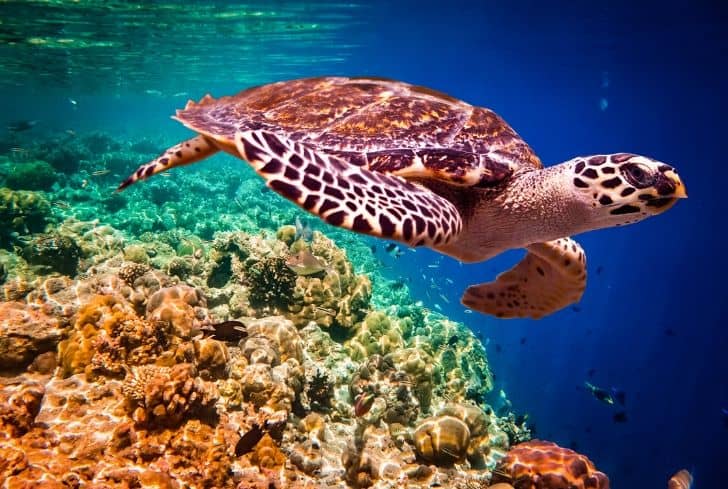 Leatherback sea turtles are able to dive up to 3000 feet deep and can swim as fast as 22 mph (35 km/h), according to the San Diego Zoo.

Leatherback sea turtles hold the record for traveling an astounding 16,000 kilometers or more each year in search of jellyfish. It made them cross the entire Pacific Ocean from Asia to the West Coast of the U.S. to forage off the coasts of Washington, Oregon, and California.

Some sea turtles usually migrate between foraging and nesting grounds, and also to warmer waters seasonally. Leatherbacks and loggerheads can cover the distance of thousands of miles every year.

Some loggerheads migrate more than 9000 miles from Japan to Baja California Sur, Mexico, and a record holder female leatherback swam nearly 13,000 miles over 647 days from Indonesia to the west coast of America!

While most sea turtles enjoy gorging on jellyfish, it isn’t always their favorite. For instance, the Sea Green turtles prefer seagrass over jellyfish and the Loggerheads are more fond of crustaceans. The Hawksbill, on the other hand, almost entirely prefers sea sponges.

Sea turtles have unique eyes and feature eyelids. They have glands that help to release excess salt from their eyes, and it appears as if they’re crying.

Fact 28: The Home is Where the Heart is

A female sea turtle returns to the beach where she was born when it is time to lay her eggs. In this 10 to 20 years between hatching and first nest, they travel vast distances. The amazing ability of sea turtles to navigate develops as they can detect the Earth’s magnetic field that helps them go back to the place they were born to lay eggs.

Olive Ridley species practice nesting in large groups of as many as 200,000 individuals and this exciting event is known as arribadas. The spectacular event can be seen in five places, including Mexico, Nicaragua, Costa Rica, Panama, and India.

In the first few years, the period could be up to 20 years between when the hatchlings emerge until they return to shallow coastal waters to forage. This period largely remains a mystery to humans as they are difficult to track during this period and are often referred to as the ‘lost years.’

The gender of sea turtles, like other reptiles, depends on the temperature of the sand where the eggs are laid in the nest. The required temperature is around 82 degrees F (29 degrees C), which can vary by species and location. Warmer temperatures tend to produce more females, cooler more males, and very high temperatures usually kill the eggs.

Fact 32: Survival of the Fittest

As estimated, only one out of a thousand hatchling will make it to adulthood. The female adults can lay thousands of eggs over their lifetimes, but few of them survive to maintain the species. They have many natural predators, including dogs, birds, crabs, fish, and mammals like raccoons.

Scientists launched a massive relocation effort after the 2010 Deepwater Horizon oil spill in the Gulf of Mexico. Scientists were worried about sea turtles hatching on the Gulf beaches of Alabama and northern Florida that would swim out into deadly oil.

They shipped 28,000 eggs via FedEx between June 25 and August 18, moving them to Kennedy Space Center on Florida’s east coast. The rescue succeeded. Around 14,000 hatchlings, mostly loggerheads were released into the Atlantic Ocean in July, August, and September.

Fact 35: The Most Dangerous Turtle

The Alligator Snapping Turtle is most scary as it sounds. It is entirely carnivorous, weighs over 200 pounds, and their bite force is 1,000 pounds.

Fact 36: Why are sea turtles Endangered?

Humans pose the biggest threats to sea turtles contributing to problems such as accidental capture, entanglement in fishing gear known as bycatch, loss of habitat, and feeding sites like coral reef due to coastal development, hunting for eggs, shell, and meat, poaching and ocean pollution including plastic. Artificial light from houses and other buildings also attracts hatchlings away from the ocean.