Kids know Disney’s The Lion King very well. This majestic animal is called the ‘king of the jungle’ or ‘Simba’ in the Swahili language. These royal beasts are known for their roars, golden mane, royal gait, fiery eyes, ferociousness, strength, and a highly sociable attitude. As lions are portrayed extensively, they are most recognizable among all wild animals. Here are some fascinating facts that will certainly help your kids know this animal called Lion better. 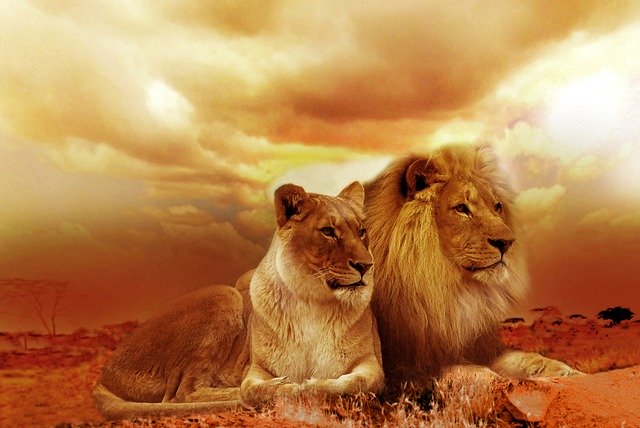 Fact 1: Why are Lions the King of the Jungle?

The lion holds the top position of the food chain as it is an alpha or top predator. That means there is no predator naturally that can hunt it down. It is, therefore, a keystone predator that plays a vital role in the maintenance of the population of other animals in ecology.

Fact 2: Lions do not live in Jungles!

Although Lions are called the king of the jungle, they actually do not live in jungles or dense forests. Lions live for 10 to 14 years in the wild like savannas, open woodlands, scrubs, and grasslands, and for 20 to 25 years in captivity. They are not found in rainforests and other dense forests.

Fact 3: The Most Interesting Species!

The lion’s scientific name is Pantheraleo, and it is the world’s second-largest cat after Tiger. Lions belong to the Felidae family and are called felids or felines, which is a pedigree of meat-eating animals commonly known as cats. They are the strictest carnivores or may be called Hyper-carnivores that survive on the flesh of animals, only comprising more than 70% portion of their diet.

Fact 4: What are their Names?

A lion has a strong, muscular, and slender body with a small round head, a deep chest, retractable claws, and powerful, flexible forelimbs. It has specially transformed cranium and dental system for a vigorous bite. The male lion has a prominent shaggy mane, unlike females, and the color of its coat usually ranges from golden-yellow to yellowish-brown. The body weights, sizes, and appearances of the male lion are different from a female lion.

Fact 6: The Story behind Lion’s Mane

An interesting characteristic of the male lions is that they have prominent mane around their neck and head. The length and the color of a lion’s mane is not only a good measure of its age but also indicates their behavior, skill, and bravery. The mane usually becomes darker with age and falls off.

While walking, the heels of a lion do not touch the ground.

An adult male lion’s roar can be heard up to 8 km away from its source. In case of any danger, lions roar to communicate with the pride’s other members.

READ:  How Can Animals Drink Dirty Water? (Any Why They Do Not Get Sick)

The male lion’s heart comprises only about 0.45% of his body weight, and because of this, it lacks stamina and can run at its top speed only for short distances.

It can run at the speed of 80 km/h or 50 mph for short distances and jump up to about 36 feet while running faster. However, lions cannot keep running at top speed for long distances as they lack stamina. Trees are the best place to hide when chased by lions because they can’t climb trees.

Lions are known as the most social cats and live in groups called pride. A pride consists of 1 to 4 male lions, several females, and their offsprings and 15 numbers in total on an average. The territory of each pride is fixed, covering from 13 to 100 square miles. The largest pride ever observed was comprised of 30 lions.

Fact 12: How do they distribute their Jobs?

Male and female lions have specific responsibilities in pride. Male lions mostly protect their territory and pride from outsider lions. They patrol regularly and keep watching vigilantly. Lionesses are responsible for arranging food for pride by hunting, and males participate if required. Females also look after the cubs.

Male lions are single hunters and do not hunt in groups. The security is the primary responsibility of male lions in a pride. They guard their territory and always patrol in a particular way to keep out other pride and predators that might affect their food supply.

They don’t even hesitate to lose their lives in the fight but never let their territory be occupied by other pride. They protect the cubs while their mother’s hunt. When they usurp any other pride, they kill all the members except the females of the pride.

Fact 16: The Lifeline of the Jungle King

The habitat of the lion usually decides its lifespan that whether they live in the wild or captivity. The regular availability of food and protection from natural threats and diseases helps them live longer in captivity than in the wild. The average lifespan of lions recorded in the wild is 10 to 14 years, the maximum being 18 years. However, very few attain this age. In captivity, Lions live for 20 to 25 years.

Lions usually eat at the place where they kill; however, sometimes they pull the kill into a covered location. In case they are unable to eat all at one time, they wait for a few hours and then continue eating. In hot seasons, after hunting, the whole pride often goes back to shadow, and one or two male lions guard the kill against scavengers like hyenas and vultures.

An adult male lion requires an average amount of 15 pounds (7 kg) meat per day to survive, while for a female lion, about 11 pounds (5 kg) is enough to stay alive. A fully grown male lion can eat up to 66 pounds (30 kilograms) of meat at a time.

Lions use short distances to attack the prey and with all their strength, catch the prey with a quick and final jump. They normally strangulate the prey, blocking oxygen supply to the body (asphyxia) or causing a condition of insufficient blood supply to the brain (cerebral ischemia). Lions generally hunt at night, and a single lion is able enough to bring down prey twice its size alone.

Fact 21: Lioness is in charge of Hunting!

Female lions are responsible for hunting in pride. They do most of the hunting in pride cooperatively and mostly in early morning and evening. Male lions prefer hunting alone and usually do not participate in group hunting.

However, male lions help in bringing down large-sized prey like the giraffe and Cape buffalo. Young lions start hunting after one year of age, and at the age of two, they become trained. Among all the male lions are fed first, then females and in the last, the aged lions and cubs. However, when food is scarce, cubs mostly suffer.

Fact 22: Any idea about Lion’s Teeth?

This member of the Felidae family has dental formula 3.1.3.1 / 3.1.2.1 and 30 teeth in all. Their canines are of an exceptional size that is primarily used to kill the prey. Lions have lower molar and upper third premolar teeth called Carnassial teeth that cut and tear like two scissors. The canine teeth of a male lion fall off when he gets old. However, lions do not chew food; they swallow it directly after chopping.

Previously in the Pleistocene epoch or Ice Age, lions were found all-around Africa, Eurasia, and the Americas. Nowadays, their populations are restricted to only a few specific regions in the world. Currently, Lions are found in the countries of Sub-saharan Africa, in the Eastern African Countries like Kenya and Tanzania, and the Southern African Countries such as Botswana, South Africa, Zimbabwe, and Zambia.

A cub looks similar to a domestic cat and is born blind like the puppies and kittens. They cannot open their eyes until the eighth day of their birth. A baby has yellowish-red fur with spots that disappear with age. Lions are mammals; therefore, females nurse their cubs for about 6 to 7 months.

After three months, they start eating meat. At the age of 6 to 8 weeks, they are introduced to their pride. It takes about three years for mail lions to be mature. About 80% of cubs die due to predation by outsider lion, hyenas, leopards, and wild dogs and also for starvation.

Lions take rest for about 20 hours a day, and the average time of their movement is only 2 hours per day. The cubs usually move with their mothers.

As lions are the alpha predators, they do not have natural predators. However, human beings are the only predators of lions. Asiatic lions are on the IUCN Red List as “Endangered” since 2008, and the African lions are also “Vulnerable” on the IUCN Red List for its decreasing population. Mostly human activities like poaching, trophy hunting, or big game hunting, loss of habitat, and scarcity of food make them endangered.